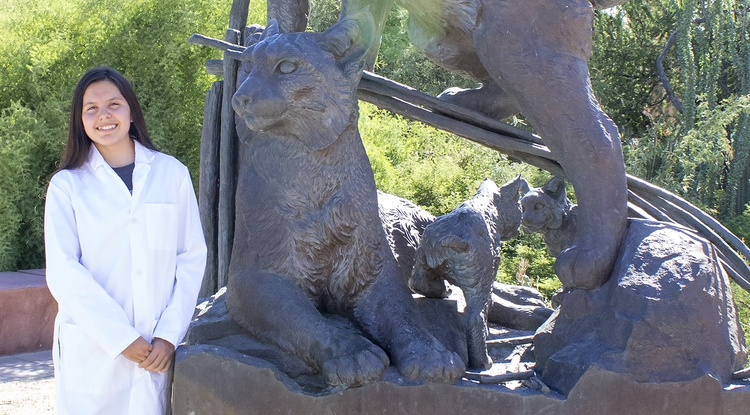 Freshmen of Distinction Arrive for the Fall

More than one-fourth are majoring in STEM fields, and their numbers have boosted the UA's percentage of newcomers defined as academically talented.
Stacy Pigott
,
University Communications
Aug. 21, 2017
Resources for the Media
As students moved in last week, new UA President Robert C. Robbins was there to lend a hand. (Photo: John de Dios/UANews)

Nizhonabah Davis is one of 10,000-plus new undergraduate students who started classes at the University of Arizona on Monday.

The class has much to look forward to, as the UA offers extracurricular activities such as clubs and organizations, intramural sports, cultural centers, student leadership groups and Greek life in addition to a world-class education. Davis plans to take advantage of several of those opportunities, but as she starts the school year, she is the most excited about one thing — getting a lab coat.

"I'm looking forward to my chemistry class," said Davis, a physics major. "I was looking at my syllabus and it says you have to have a lab coat. It was like, oh my gosh, I'm getting my first lab coat!

"I've attended small schools, so I'm also looking forward to meeting other students," added Davis, who was valedictorian of her high school class of approximately 140.

At the UA, she will have plenty of opportunities to network with her peers, as the incoming class is brimming with talented students like her. The UA has seen an increase in the number of freshmen who are Arizona residents (up 7 percent since 2015), as well as a spike in the number of high-achieving students. Diversity is at an all-time high as well, with 46 percent of new freshmen and 51 percent of new transfers coming from diverse backgrounds.

"I very much enjoyed meeting many of our new students and their parents over the summer," said new UA President Robert C. Robbins. "I have been very impressed with the caliber of this incoming class, and I am even more excited now that we know just how amazing they are. Great things are in store for the UA and for the newest members of the Wildcat family."

Davis comes to the UA from northern Arizona, where she and her mother, Ellarene Jones, are part of the Navajo Nation. As a senior at Ganado High School, Davis participated in the UA's Native American Science and Engineering Program, a yearlong endeavor that connects Native American students with academic professionals and industry representatives in STEM fields. Overall, 26 percent of new freshmen are majoring in STEM fields at the UA.

"I want to be an engineer; I want to be a doctor; I want to be a physicist, too. I'm going to do all of them and see what I like to do. I can always minor in something," said Davis, whose status as a Flinn Scholar covers her tuition, and room and board, at one of Arizona's three public universities. "It was a really hard choice. Every school has so much to offer. I interviewed a lot of people and felt that the UA would be the best fit for me."

Davis' rural home didn’t have internet access, but at the UA, she will be able to take advantage of a 21st-century campus infused with new technological offerings. All UA students can find internships and jobs through the Handshake networking and career app, take advantage of Fast Track skill-building programs and enjoy complete access to the Adobe Creative Cloud suite of products.

Kasey Urquidez, vice president for Enrollment Management and Student Affairs Advancement and dean of undergraduate admissions, said she and the rest of the UA community are "honored to welcome all of our new and returning Wildcats to campus."

"The entering class is our most diverse ever, with increases in academic quality and test scores," Urquidez said. "We are thrilled with the continuing growth of outstanding Arizona residents selecting the University of Arizona as their institution of choice."

Davis is one of only two Flinn Scholars from a rural tribal community and one of 10 Flinn Scholars attending the UA this fall. An additional 14 Flinn finalists and 21 semifinalists are joining the freshman class. Those students, and others, have contributed to a 39 percent boost in the UA's percentage of academically talented Arizona residents, defined as those freshmen with an unweighted core GPA of 3.5 or higher and a score of 1300 or greater on the SAT.

Some of those high achievers also can be found in the ranks of transfer students — another demographic that is on the rise at the UA. The number of enrolled transfer students already has exceeded 2,200, a 3 percent rise that will grow as transfer students continue to register for all campuses and modalities.

"Today there are more Wildcats coming to campus, more families celebrating their students' success and, ultimately, more students who will graduate with degrees from one of the world's great universities. It's a great day for our students and for Arizona," said Melissa Vito, senior vice president for Student Affairs, Enrollment Management and Strategic Initiatives. "These enrollment milestones are thanks to an unprecedented combination of campuswide teamwork, innovation and strategic reinvestments in areas such as financial aid."

Two UA transfers share more than that membership, as Kimberlyn and Jose Guzman are siblings and now Wildcats. The sister and brother, who are only 10 months apart in age, have transferred to the UA from Phoenix College and will major in English and pre-business, respectively.

"I chose to attend the University of Arizona because it is my dream school," said Kimberlyn, the older of the two. "I believe it is a safe and supportive learning environment filled with many opportunities."

Kimberlyn hopes to become a UA Ambassador and plans to participate in several student groups, as does Jose. The siblings, who have been in the same grade since kindergarten and often are mistaken for twins, are first-generation college students.

"Currently, I'm interested in joining the marketing club," Jose said. "I've always had a natural ability in generating interest for an idea. One day I want to create my own business, which I can achieve not necessarily after I finish college. If I were to start my own business, it would be media oriented. I would shoot photographs and edit videos as my commercial business. This is a small portion of what I am considering to do after college at this point in my life."

The Guzmans and Davis were three of many new UA students who followed their dreams to Tucson. During move-in, Davis and a few family members, like many new UA families, stopped by the UA BookStore. There, they bought a UA stuffed animal for Taya Play, one of Davis' many cousins. The fifth-grader hugged the toy tightly as the family toured Davis' new home-away-from-home.

"It made my day, seeing her walking around campus and smiling," Davis said of her cousin. "Maybe I can inspire her to go to college someday, too."