Frozen Comet Had a Watery Past, UA Scientists Find

The discovery of minerals requiring liquid water for their formation challenges the paradigm of comets as “dirty snowballs” frozen in time.
Daniel Stolte
,
University Communications
April 5, 2011
Resources for the Media
This artist’s impression shows the irregular surface of comet Wild-2 and jets spouting into space at speeds of several hundred kilometers per hour. A UA-led team of scientists now found evidence that Wild-2 harbored liquid water at some point in its history. (Image: NASA/JPL-Caltech) 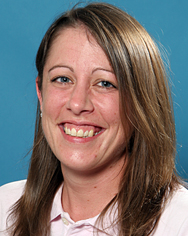 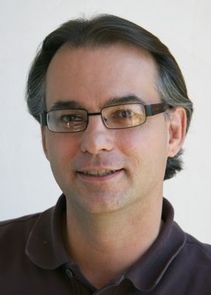 Dante Lauretta is a professor in the UA's department of planetary sciences and the study's principal investigator.

For the first time, scientists have found convincing evidence for the presence of liquid water in a comet, shattering the current paradigm that comets never get warm enough to melt the ice that makes up the bulk of their material.

"Current thinking suggests that it is impossible to form liquid water inside of a comet," said Dante Lauretta, an associate professor of cosmochemistry and planet formation at the UA's Lunar and Planetary Laboratory. Lauretta is the principal investigator of the UA team involved in analysis of samples returned by NASA's Stardust mission.

UA graduate student Eve Berger, who led the study, and her colleagues, Lindsay Keller from Johnson Space Center and Thomas Zega from the Naval Research Laboratory, made the discovery analyzing dust grains brought back to Earth from comet Wild-2 as part of the Stardust mission. Launched in 1999, the Stardust spacecraft scooped up tiny particles released from the comet's surface in 2004 and brought them back to Earth in a capsule that landed in Utah two years later.

"In our samples, we found minerals that formed in the presence of liquid water," Berger said. "At some point in its history, the comet must have harbored pockets of water."

The discovery is to be published in an upcoming online edition of the journal Geochimica et Cosmochimica Acta.

Comets are frequently called dirty snowballs because they consist of mostly water ice, peppered with rocky debris and frozen gases. Unlike asteroids, extraterrestrial chunks made up of rock and minerals, comets sport a tail – jets of gas and vapor that the high-energy particle stream coming from the sun flushes out of their frozen bodies.

"When the ice melted on Wild-2, the resulting warm water dissolved minerals that were present at the time and precipitated the iron and copper sulfide minerals we observed in our study," Lauretta said. "The sulfide minerals formed between 50 and 200 degrees Celsius (122 and 392 degrees Fahrenheit), much warmer than the sub-zero temperatures predicted for the interior of a comet."

Discovered in 1978 by Swiss astronomer Paul Wild, Wild-2 (pronounced "Vilt") had traveled the outer reaches of the solar system for most of its 4.5 billion year history, until a close encounter with Jupiter's field of gravity sent the 3.4 mile-wide comet onto a new, highly elliptical orbit bringing it closer to the sun and the inner planets.

Scientists believe that like many other comets, Wild-2 originated in the Kuiper belt, a region extending from beyond Neptune's orbit into deep space, containing icy debris left over from the formation of the solar system. Wild-2 is thought to have spent most of its time in the Kuiper belt, transiting on unstable orbits within the planetary system before Jupiter's gravity hurled it into the neighborhood of the sun.

The discovery of the low-temperature sulfide minerals is important for our understanding of how comets formed – which in turn tells us about the origin of the solar system.

In addition to providing evidence of liquid water, the discovered ingredients put an upper limit to the temperatures Wild-2 encountered during its origin and history.

"The mineral we found – cubanite – is very rare in sample collections from space," Berger said. "It comes in two forms – the one we found only exists below 210 degrees Celsius (410 degrees Fahrenheit). This is exciting because it tells us those grains have not seen temperatures higher than that. "

Cubanite is a copper iron sulfide, which is also found in ore deposits on Earth exposed to heated groundwater and in a particular type of meteorite.

"Wherever the cubanite formed, it stayed cool," she added. "If this mineral formed on the comet, it has implications for heat sources on comets in general."

According to Berger, two ways to generate heat sources on comets are minor collisions with other objects and radioactive decay of elements present in the comet's mixture.

Heat generated at the site of minor impacts might generate pockets of water in which the sulfides could form very quickly, within about a year (as opposed to millions of years). This could happen at any point in the comet's history. Radioactive decay on the other hand, would point to a very early formation of the minerals since the radioactive nuclides would decay over time and cause the heat source to flicker out.

The presence of the cubanite and the other sulfide minerals helps scientists better understand cometary heat sources. The interior of the comet must have been warm enough to melt ice yet cool enough – below 210 degrees Celsius – to form cubanite.

"Such detailed thermal constraints will allow for detailed analysis of the role temperature played during the history of comet Wild 2," Lauretta said.

Each sample Berger's team analyzed consisted of a microscopic speck of cometary dust about the size of a bacterial cell. The group then studied the chemical composition by electron microscopy and X-ray analysis, during which the chemical elements revealed their presence by giving off a characteristic beam. Turning the sample in different orientations gave the scientists clues about its crystallographic structure.

According to Lauretta, the findings show that comets experienced processes such as heating and chemical reactions in liquid water that changed the minerals they inherited from the time when the solar system was still a protoplanetary disk, a swirling mix of hot gases and dust, before it cooled down enough for planets to form.

The results demonstrate the increasingly apparent connections between comets and asteroids.

"What we found makes us look at comets in a different way," Lauretta said. "We think they should be viewed as individual entities with their own unique geologic history."

"This study shows the high science value of sample return missions," Lauretta said. "These grains would never been detected by remote sensing or by flying a spacecraft past the comet to make observations without collecting a sample."

Lauretta believes so strongly in the value of sample return missions that he has spent the past seven years developing the OSIRIS-REx Asteroid Sample Return mission, which is currently a finalist in the NASA New Frontiers mission competition. Selections are expected in early June.