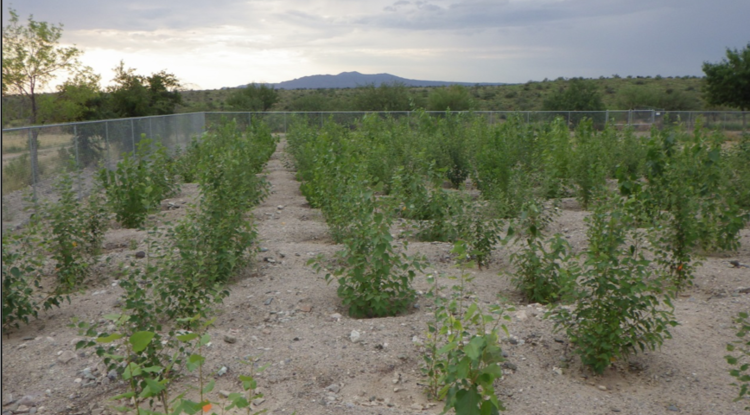 Poplar trees are fast-growing trees that are a source of biofuel and other products including paper, pallets, plywood and furniture frames. (Photo: David J.P. Moore)

University of Arizona-led research found that trees in which isoprene production was genetically suppressed did not suffer ill effects in terms of photosynthesis or biomass production.
Russell Monson
,
College of Science
Jan. 6, 2020
Resources for the Media 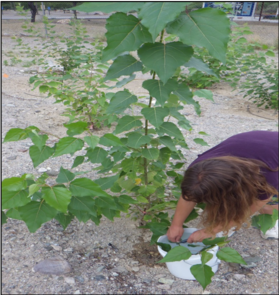 Amberly Neice was a student in the National Science Foundation-funded Research Experiences for Undergraduates program when she assisted with the poplar tree study in 2014. (Photo: David J.P. Moore)

While providing benefits to the environment, some trees also emit gases to the atmosphere that worsen air pollution and alter climate. Field trials in Oregon and Arizona show that poplar trees, which emit trace amounts of the gas isoprene, can be genetically modified not to harm air quality while leaving their growth potential unchanged.

The findings, published today in the journal Proceedings of the National Academy of Sciences, are important because poplar plantations cover 9.4 million hectares (36,294 square miles) globally – more than double the land used 15 years ago. Poplars are fast-growing trees that are a source of biofuel and other products including paper, pallets, plywood and furniture frames.

Poplars and other trees used in plantation agroforestry, including palms and eucalyptus, produce isoprene in their leaves in response to climate stress such as high temperature and drought. The isoprene alleviates those stresses by signaling cellular processes to produce protective molecules; however, isoprene is so volatile that millions of metric tons leak into the atmosphere each year.

The emitted isoprene reacts with gases produced by tailpipe pollution to produce ozone, which is a respiratory irritant. Isoprene also causes higher levels of atmospheric aerosol production, which reduces the amount of direct sunlight reaching the earth (a cooling effect), and it causes the global warming potential of methane in the atmosphere to increase (a warming effect). The warming effect is most likely greater than the cooling effect. The net effect of emitted isoprene is to worsen respiratory health and, most likely, warm the atmosphere.

A research collaboration led by scientists at the University of Arizona, the Helmholtz Research Center in Munich, Portland State University and Oregon State University genetically modified poplars not to produce isoprene, then tested them in three- and four-year trials at plantations in Oregon and Arizona.

The researchers found that trees whose isoprene production was genetically suppressed did not suffer ill effects in terms of photosynthesis or “biomass production.” They were able to make cellulose, used in biofuel production, and grow as well as trees that were producing isoprene. The discovery came as a surprise, given the protective role of isoprene in stressful climates, especially in the case of the Arizona plantation.

"The suppression of isoprene production in the leaves has triggered alternative signaling pathways that appear to compensate for the loss of stress tolerance due to isoprene," said Russell Monson, a professor of ecology and evolutionary biology at the University of Arizona and lead author of the study. "The trees exhibited a clever response that allowed them to work around the loss of isoprene and arrive at the same outcome, effectively tolerating high temperature and drought stress."

“Our findings suggest that isoprene emissions can be diminished without affecting biomass production in temperate forest plantations,” said study co-author Steven Strauss, a distinguished professor of forest biotechnology at Oregon State University. “That’s what we wanted to examine – can you turn down isoprene production, and does it matter to biomass productivity and general plant health? It looks like it doesn’t impair either significantly.”

The researchers used a genetic engineering tool known as RNA interference. RNA transmits protein coding instructions from each cell’s DNA, which holds the organism’s genetic code. The genetic tools for modifying the trees, and the protein analyses that revealed changes in the use of biochemical pathways, were developed by scientists at the Institute of Biochemical Plant Pathology, Helmholtz Research Center in Munich, Germany, who collaborated on the study.

“RNA interference is like a vaccination – it triggers a natural and highly specific mechanism whereby specific targets are suppressed, be they the RNA of viruses or endogenous genes,” Strauss said. “You could also do the same thing through conventional breeding. It would be a lot less efficient and precise, and it might be a nightmare for a breeder who may need to reassess all of their germplasm and possibly exclude their most productive cultivars as a result, but it could be done. New technologies like CRISPR, short for clustered regularly interspaced short palindromic repeats, which allows for precise DNA editing at specific stretches of the genetic code, should work even better.”

In an additional discovery, the researchers found that trees were able to adjust to the loss of isoprene because most plantation growth takes place during cooler and wetter times of the year.

"This means that, for this species, the natural seasonal cycle of growth works in favor of high biomass production when the beneficial effects of isoprene are needed least," Monson explained.

This observation also clarified an adaptive role for isoprene in natural forests, where protection that enhances survival during mid-season climate stress is likely more important than processes that promote growth early in the season.

“The fact that cultivars of poplar can be produced in a way that ameliorates atmospheric impacts without significantly reducing biomass production gives us a lot of optimism,” Monson said. “We’re striving toward greater environmental sustainability while developing plantation‐scale biomass sources that can serve as fossil fuel alternatives."

Scientists from Portland State University, the University of California, Riverside, NASA’s Goddard Space Flight Center, and the Institute for Microbiology in Greifswald, Germany, also collaborated on the study.