Tucked inside a protective case, the LSST mirror is lowered onto a flatbed trailer to be hauled off to temporary storage. (Photo: Daniel Stolte/UANews)

After years of polishing to perfection, the mirror slated to form the heart of the Large Synoptic Survey Telescope, expected to revolutionize our view of the cosmos as a place of constant change, has left the UA's Richard F. Caris Mirror Lab.
Daniel Stolte
,
University Relations – Communications
May 20, 2015
Resources for the Media
Measuring 27 feet in diameter, the LSST mirror rests on the polishing table in the UA's Richard F. Caris Mirror Lab. It's the only mirror in the world that combines a large primary mirror and a smaller tertiary mirror in one piece. (Photo: Mirror Lab/LSST Corp.) 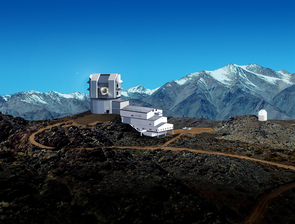 Perched atop Cerro Pachón in Chile, the Large Synoptic Survey Telescope, or LSST, will scan vast sections of the night sky for fleeting objects such as supernovae or passing asteroids. (Illustration: Michael Mullen Design, LSST Corp.)

The only telescope mirror ever made that combines two mirrors in one piece of glass left the University of Arizona's Richard F. Caris Mirror Lab on Monday, where it had spent the past seven years in various stages of production.

At 7 a.m., the lab's hangar-like gates slid open and made way for the 27-foot mirror, tucked away inside a custom-made steel crate, suspended from a crane. Over the course of an hour, employees of the Phoenix-based company Precision Heavy Haul lowered the crate and mirror, with a combined weight of 56 tons, onto a flatbed trailer-truck that would haul the $20 million payload to a storage facility close to the Tucson airport in the wee hours of the next morning.

The mirror will form the centerpiece of the Large Synoptic Survey Telescope, or LSST, a revolutionary observatory slated to go up in Cerro Pachón in Chile. After the National Foundation approved funding for the LSST last year, the telescope will see first light in 2019 and begin full science operations in 2022.

The LSST is designed to scan large swaths of night sky quickly and repeatedly to capture what astronomers call "variables," which are exploding stars, passing asteroids and other highly variable, dynamic or short-lived phenomena in the universe. Equipped with a 3-billion-pixel digital camera — the largest to date — the LSST will provide time-lapse digital imaging of faint astronomical objects across the entire sky, promising a deep and changing view of the cosmos.

In the past, people looked at the heavens as something that never changed, hence the name "firmament," explained Dennis Zaritsky, deputy director of the UA's Department of Astronomy and Steward Observatory.

"Now we know that the LSST will discover millions of variable objects and cosmic events every single night," he said. "Some are stars that get brighter and dimmer. Others will be new things that we don't even know about yet — in the thousands — and we'll have to figure out how to decide which ones to go after."

One such program, ANTARES, is currently underway. In a joint effort between the UA's Department of Computer Science and the National Optical Astronomy Observatory, scientists are developing computer algorithms capable of monitoring the flood of incoming data, flagging events and observations that could be of special interest to astronomers.

"The LSST touches on a wide range of fields, not just astronomy," Zaritsky said. "It will enable us to do completely new astronomy, new computer science and new data science."

The data generated by the LSST will be made publicly available, allowing professional and amateur astronomers to quickly follow up on discoveries made by the scanning telescope with other instruments for more detailed study. UA astronomers have an edge over colleagues elsewhere in the world because they have access to other telescopes, such as the Large Binocular Telescope in southeastern Arizona and planned new ones such as the Giant Magellan Telescope that will enable them to follow up the most interesting discoveries from the LSST.

The LSST mirror is expected to remain in storage for about two years before it will be sent on its journey to Chile. To protect the one-of-a-kind dish against bumps during transport, it is mounted to an inner frame that is connected to the outer crate through "air springs," which resemble glorified tires, and other shock absorbers.

Cast in 2007, the LSST mirror is the latest of 18 large mirrors produced by the UA's lab. The mirror consists of a specially formulated and extremely pure variety of borosilicate glass, which — similar to the familiar Pyrex glassware of household use — stands out for its resistance against swings in temperature. Because of their special honeycomb design developed by UA Regents' Professor and Mirror Lab director Roger Angel, the UA's mirrors can be extremely lightweight relative to their large size. This allows for smaller and more lightweight supporting structures, keeping down the construction and operating costs of the observatories in which they work.

Zaritsky is convinced that the LSST will revolutionize the way we look at the sky.

"There are a few programs that use small telescopes to find variables, but those don't cover the whole sky and they don't operate as systematically as the LSST will, all night long and all the time," he said. "With the LSST, we will be able to do truly systematic, comprehensive studies of those phenomena on scales from seconds to decades. There is nothing else like that."