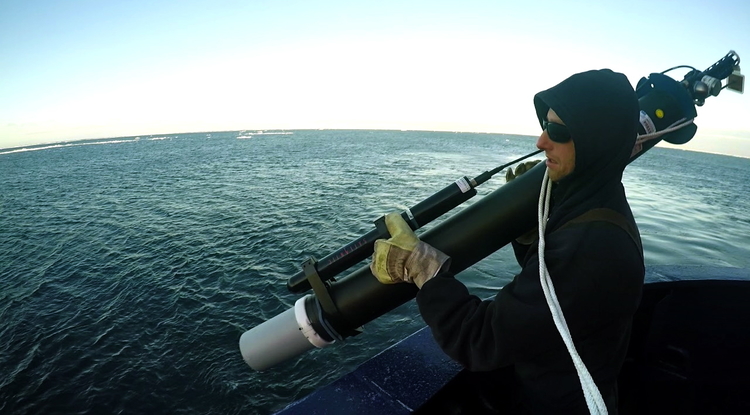 A researcher prepares to deploy a robotic float into the Southern Ocean, the water body surrounding Antarctica. The floats are lowered over the side of the vessel on a rope and slide off the rope once in the water. (Photo: Hannah Zanowski)

NSF, NOAA and NASA are funding the UA and others to study the Earth's climate with robotic floats and supercomputers.
Shelley Littin
,
CyVerse
June 8, 2016
Resources for the Media 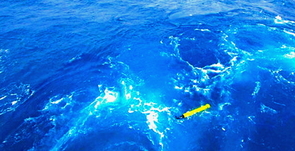 A robotic biogeochemically sensored float bobs away in the ocean surf. The float will collect biological, geological and chemical data to help scientists understand how climate change is affecting the Earth's oceans. (Photo: Isa Rosso) 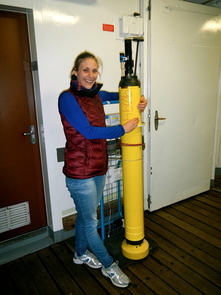 Hannah Zanowski, a former UA undergraduate, holds Float No. 9094. Zanowski is pursuing a Ph.D. at Princeton University after working with Joellen Russell on the SOCCOM project. (Photo courtesy of Joellen Russell)

With the help of CyVerse, the NSF-funded and University of Arizona-led national data management project, SOCCOM hopes soon to expand the network of floats to monitor carbon cycling throughout the world's swiftly changing oceans.

"We have an international agreement to reduce carbon and other greenhouse gases. Now is the time to act," says Joellen Russell, an oceanographer and climate modeler in the UA's Department of Geosciences, who heads up SOCCOM’s modeling efforts. "But we need to count the carbon in order to manage the carbon."

Meltwater from the Antarctic ice sheet and the mergence of major global currents are causing the Southern Ocean to change faster than the Earth's other oceans in response to climate change. Studying these sensitive waters would herald how other oceans also may change in the future.

The Earth's oceans are the largest active reservoir of carbon and are vital in the global carbon cycle. The SOCCOM floats measure carbon system parameters of the ocean, including pH and nitrogen, as well as temperature, salinity, oxygen concentration and more. The floats have built-in inflatable bladders that enable them to control their depth to collect data from the surface all the way down to 2,000 meters.

"These measurements will allow us to quantify the variability of the ocean's nutrient cycling," Russell said. "In other words, we can monitor the metabolism of the ocean."

Within 10 minutes of returning to the surface, the floats beam their data to the Iridium satellite network, which relays it to MBARI and the University of Washington. In less than two hours, the raw data are available on the internet to researchers at a variety of institutions involved in the data analysis effort.

And in contrast to the costly and time-consuming method of collecting oceanic data from manned research vessels, robotic floats are programmed to take measurements every five to 10 days and operate autonomously for years.

With nearly a quarter of the proposed 200 Southern Ocean floats deployed, the value of the extensive scientific array capable of providing data in near real-time already was apparent when Russell attended the Biogeochemical Argo Planning Conference in Villefranche-sur-Mer, France, in January 2016. The Argo array is a global network of ocean floats that measure temperature and salinity — but not biogeochemical components such as oxygen, pH and nitrogen.

Conference attendees posed a pivotal question: How many biogeochemical floats would need to be deployed around the world in order to monitor changes to global ocean carbon uptake in real time?

In other words, they asked, "Can we do this for the world?"

Scaling Up From the Southern Ocean

In order to make a global array of biogeochemical floats a reality, the researchers would need approval of members of the Group of 7, or G7, a coalition of the world's seven major advanced economies who work toward cooperating on common initiatives.

With the 42nd G7 Summit scheduled for Japan in May, the SOCCOM researchers wanted to prepare a recommendation for a global biogeochemical array, including estimates of the number of floats necessary.

"With the Southern Ocean array just getting started, we had to quickly turn around and calculate how many floats we would need to collect oceanic data on a global scale," Russell said.

There was one major hurdle.

To estimate how many floats would be needed on a global scale, SOCCOM needed to analyze high-resolution climate model simulations carried out by NOAA's Geophysical Fluid Dynamics Laboratory, or GFDL.

GFDL needed to find a way to move the simulation data to a secure, academically accessible location. "It's hundreds of terabytes of data, and we needed access for collaborators at Scripps Institute of Oceanography and other institutions in order to complete these calculations for a global array of floats," Russell said.

That's when she turned to CyVerse.

"We wanted to not just share the data, but also to share the analyses and tools, which CyVerse made possible," Russell said.

With powerful, high-performance computational infrastructure, the NSF's premier data management project provided the means to transfer the simulation data from GFDL to CyVerse itself, a platform where all the collaborators could securely share data, models and resources.

"Now plans for a global array of biogeochemical floats are developing rapidly," Russell said. "We're continuing to use the CyVerse infrastructure to accelerate our planning and discovery as we respond to the world's need for information about ocean carbon uptake."

With access to GFDL's climate simulations, SOCCOM scientists were able to present their recommendations at the G7 Summit meeting, and the panel of experts has recommended moving ahead with plans to deploy a global array of biogeochemically sensored ocean floats.

"The only way to see the future is to use math and supercomputers," Russell said. "This is the first time ever that we've been able to move toward monitoring the oceans' fully integrated carbon uptake relative to human emissions. We could see the oceans in a way they have never been seen before."