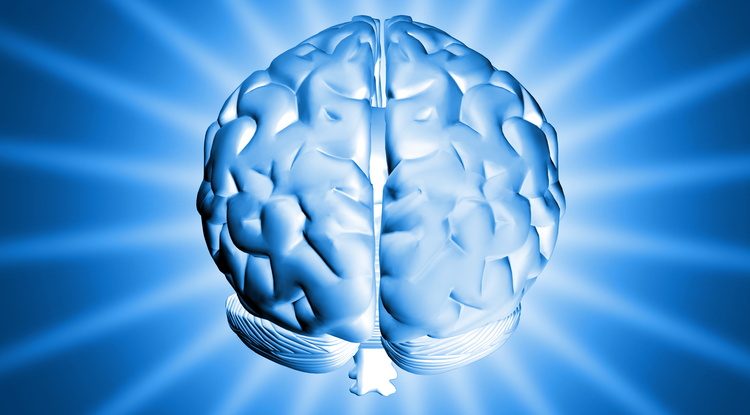 Ultrasound vibrations applied to the brain may affect mood, UA researchers have discovered. The finding potentially could lead to new treatments for psychological and psychiatric disorders.
Shelley Littin
,
University Communications
July 16, 2013
Resources for the Media 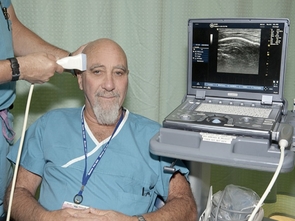 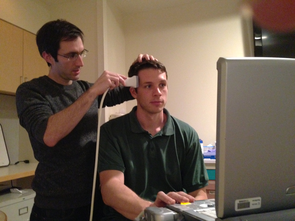 University of Arizona researchers have found in a recent study that ultrasound waves applied to specific areas of the brain appear able to alter patients' moods. The discovery has led the scientists to conduct further investigations with the hope that this technique could one day be used to treat conditions such as depression and anxiety.

Dr. Stuart Hameroff, professor emeritus of the UA's departments of anesthesiology and psychology and director of the UA's Center for Consciousness Studies, is lead author on the first clinical study of brain ultrasound, which was published in the journal Brain Stimulation.

Hameroff became interested in applying ultrasound to the human brain when he read about a study by colleague Jamie Tyler at the Virginia Polytechnic Institute, who found physiological and behavioral effects in animals of ultrasound applied to the scalp, with the waves passing through the skull.

"I said to my anesthesiology colleagues, 'we should try this on chronic pain patient volunteers.'" His colleagues respectfully suggested he try it on himself, first. Hameroff acquiesced.

After 15 seconds with an ultrasound transducer, a standard ultrasound imaging device, placed against his head, Hameroff felt no effect.

"I put it down and said, 'well, that's not going to work,'" he said. "And then about a minute later I started to feel like I'd had a martini."

His mood was elevated for the next hour or two, Hameroff said. Aware that his experience could be a placebo effect, an imagined effect derived from his expectation to feel a change, Hameroff set out to properly test the treatment with a clinical trial.

With research committee and hospital approval, and patient informed consent, Hameroff and his colleagues applied transcranial ultrasound to 31 chronic pain patients at The University of Arizona Medical Center-South Campus, in a double blind study in which neither doctor nor subject knew if the ultrasound machine had been switched on or off.

Patients reported improvements in mood for up to 40 minutes following treatment with brain ultrasound, compared with no difference in mood when the machine was switched off. The researchers confirmed the patients' subjective reports of increases in positive mood with a Visual Analog Mood Scale, or VAMS, a standardized objective mood scale often used in psychological studies.

"Encouraging!" Hameroff remarked. "We're referring to transcranial ultrasound as 'TUS,'" he added. "Which is also the airport code for Tucson."

"This was a pilot study which showed safety, and some efficacy, for clinical use of TUS," Hameroff said. "Beause important structures called microtubules in all brain neurons vibrate in the ultrasound range, and help mediate mood and consciousness, TUS may benefit a variety of neurological and psychiatric disorders."

The discovery may open the door to a possible range of new applications of ultrasound in medicine.

"We frequently use ultrasound in the operating room for imaging," said Hameroff. "It's safe as long as you avoid excessive exposure and heating."

The mechanical waves, harmless at low intensities, penetrate the body's tissues and bones, and an echo effect is used to generate images of anatomical structures such as fetuses in the womb, organs and blood vessels.

Additionally, the high-frequency vibrations of ultrasound, which far exceed the range of human hearing and are undetectable when passing through the body, may be more desirable than existing brain stimulation techniques such as transcranial magnetic stimulation, or TMS. Used to treat clinically depressed patients, TMS can have side effects including what some describe as an unpleasant sensation of magnetic waves moving through the head.

After finding promising preliminary results in chronic pain patients, Hameroff and his colleagues set out to discover whether transcranial ultrasound stimulation could improve mood in a larger group of healthy volunteer test subjects.

Jay Sanguinetti, a doctoral candidate in the department of psychology and his adviser John Allen, a UA distinguished professor of psychology, were intrigued by Hameroff's idea of testing ultrasound.

They conducted a followup study of ultrasound on UA psychology student volunteers, recording vital signs such as heart rate and breath rate, and narrowed down the optimum treatment to 2 megahertz for 30 seconds as the most likely to produce a positive mood change in patients.

"With 2 megahertz those who were stimulated with ultrasound reported feeling 'lighter,' or 'happier;' a little more attentive, a little more focused and a general increase in well-being," Sanguinetti said.

Allen and Sanguinetti then began a double blind clinical trial to verify the statistical significance of their findings and to rule out any possibility of a placebo effect in their patients. Results of the trials are being analyzed, Sanguinetti said.

"What we think is happening is that the ultrasound is making the neurons a little bit more likely to fire in the parts of the brain involved with mood," thus stimulating the brain's electrical activity and possibly leading to a change in how participants feel, Sanguinetti said.

The UA researchers are collaborating with the Silicon Valley-based company Neurotrek, which is developing a device that potentially could target specific regions of the brain with ultrasound bursts.

The UA researchers will work with a prototype of the Neurotrek device to test its efficacy and potential applications.

Said Sanguinetti: "The idea is that this device will be a wearable unit that noninvasively and safely interfaces with your brain using ultrasound to regulate neural activity."