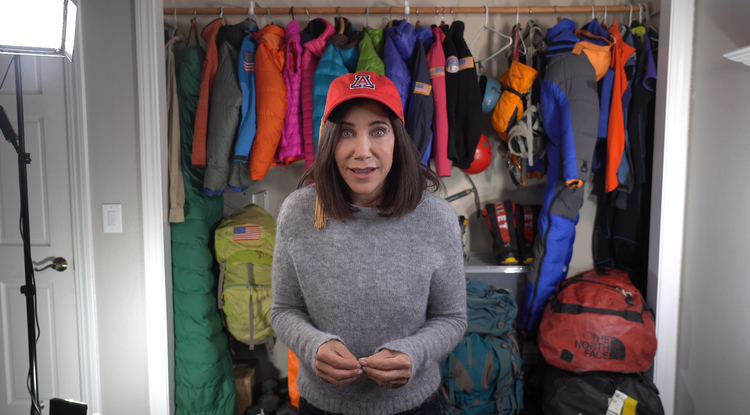 Commencement keynote speaker Alison Levine, a history-making mountaineer and university alumna, addresses graduates in a video filmed for the virtual 2020 Commencement. "You are resilient, you are creative, you have learned to sacrifice, to pivot and to keep going when you thought you couldn't," Levine said. "You are the fiercest Wildcat class ever." 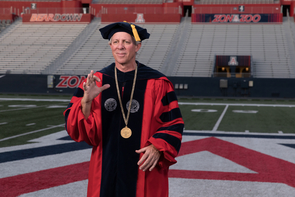 University President Robert C. Robbins addressed the audience in video clips filmed at locations around campus, including Arizona Stadium. "The new format of celebration this year is out of necessity, and we know it's not traditional; however, commitment to celebrating your achievement is as robust as ever," he said. (Photo: Chris Richards/University of Arizona) 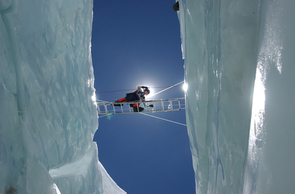 Levine crosses a crevasse in the Khumbu Icefall during an ascent up Mount Everest. (Photo courtesy of Alison Levine)

How does college compare to climbing the world's tallest mountain? There are a few ways, according to someone who's done it twice.

Alison Levine, a mountaineer, adventurer and university alumna, called on her trips up Mount Everest to show the class of 2020 that the challenges they overcame this spring will only make them stronger.

"When it comes down to it, what will help you more than math or history or biology or computer science is, indeed, resilience," Levine said as she stood before a closet full of parkas, backpacks, helmets and other expedition gear. "I would argue that you, class of 2020, are coming away with more of that than any class before."

Robbins, in his opening remarks, addressed graduates from Arizona Stadium, where Commencement is usually held.

"The new format of celebration this year is out of necessity, and we know that it's not traditional; however, commitment to celebrating your achievement is as robust as ever," he said.

"You have reached a milestone in your lives by earning your degrees, and now, we are all excited to see the impact you will make on our world," he said.

Levine, in her address, likened the circumstances surrounding this year's Commencement to the challenge she faced when she led the first American Women's Everest Expedition in 2002. A storm turned the team back just 300 feet from the summit.

"I can absolutely relate to what it feels like to lose an opportunity that you worked so hard for," she said.

"Everything I learned during that failed attempt on Everest prepared me for life's challenges going forward – including a successful Everest climb that would come eight years later," she said.

She urged graduates to embrace and brave their fears but to not be complacent. She also assured them that changing direction – like retreating back to base camp on Everest – is never something to be ashamed of.

"Backing up is not the same as backing down," she said.

She reminded graduates that their summit – graduation – is not the end, but a time to reflect on lessons from college and how those lessons will guide them through their professional lives.

"Reaching the top of a mountain is not nearly as important as the lessons you learn along the way when you're fighting with everything you've got in you to get up there – and what you're going to do with that information to be better going forward," Levine said. "It's that fight during the journey that benefits us the most, because that struggle makes us stronger."

Despite the shared challenge for the class 2020, nothing can take away from the shared accomplishment of graduation, Levine said, adding that the class has "raised the bar" with its perseverance in uncertain times.

"You are resilient, you are creative, you have learned to sacrifice, to pivot and to keep going when you thought you couldn't," Levine said.

"You are the fiercest Wildcat class ever."

Levine, a New York Times bestselling author, speaker and businesswoman, graduated from UArizona in 1987 with a bachelor's degree in communication. She has climbed the highest peak on every continent and has skied to both the North and South poles – a feat known as the Adventure Grand Slam, which only 20 people in the world have achieved. In 2016, she completed first ascents – or the first successful documented climbs to the top – of Hall Peak in Antarctica and Khang Karpo in Nepal.

Levine is one of five honorees to receive an honorary Doctor of Humane Letters degree this year. The other recipients are Bruce and Patricia Bartlett, benefactors and champions of the university's Strategic Alternative Learning Techniques Center; Melody S. Robidoux, a businesswoman, philanthropist and UArizona alumna who co-founded the Women's Foundation of Southern Arizona; and Linda Ronstadt, a 10-time Grammy Award-winning singer, Rock and Roll Hall of Fame inductee and Tucson native.

The virtual ceremony will be available to watch in full on the Commencement website after the event. The class of 2020 will be celebrated with an in-person ceremony during Homecoming Weekend on Oct. 30.