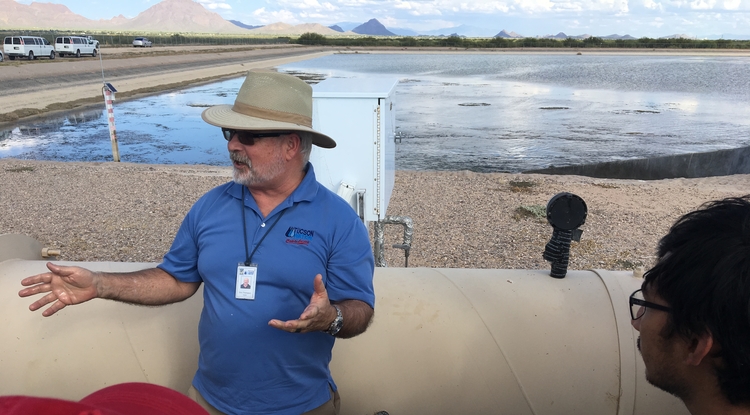 Groundwater Recharge and Climate Change in the West

The new research suggests regions that are heavily dependent on groundwater will have less recharge as the climate warms.
Mari N. Jensen
,
UA College of Science
Nov. 16, 2017
Resources for the Media

"Our study asked what will be the effect of climate change on groundwater recharge in the Western U.S. in the near future, 2021-2050, and the far future, 2070-2100," said first author Rewati Niraula. The research was part of his doctoral work in the UA Department of Hydrology and Atmospheric Sciences.

The new study covers the entire U.S. West, from the High Plains states to the Pacific coast, and provides the first detailed look at how groundwater recharge may change as the climate changes, said senior author Thomas Meixner, UA professor and associate department head of hydrology and atmospheric sciences.

Groundwater is an important source of freshwater, particularly in the West, and is often used to make up for the lack of surface water during droughts, the authors note. In many areas of the West, groundwater pumping currently exceeds the amount of groundwater recharge.

"The portions of the West that are already stretched in terms of water resources — Arizona, New Mexico, the High Plains of Texas, the southern Central Valley — for those places that are already having problems, climate change is going to tighten the screws," Meixner said.

Niraula said, "2021 is pretty close, so we need to start acting now. At the individual level and water-manager level there are many things we can do."

The researchers tested how future precipitation and temperature projections would interact with aspects of the land surface such as vegetation and soil type to affect groundwater recharge during two time intervals: 2021-2050 and 2071-2100.

Changes in Recharge Are Complex

Although generally the dry areas are going to get drier and the wet areas will get wetter under climate change, the new research indicates that future changes in groundwater recharge are more complex.

"Changes in recharge don’t necessarily map onto changes in precipitation even at a very local scale," Meixner said. "The geology and the ecology of the landscape have an effect."

The paper "How Might Recharge Change Under Projected Climate Change in the Western U.S.?" is posted online and is scheduled for publication in Geophysical Research Letters this week. The U.S. Geological Survey's John Wesley Powell Center and the National Science Foundation funded the research.

To estimate groundwater recharge for the baseline period of 1971-2000, the researchers used a model known as Variable Infiltration Capacity, or VIC. Information from VIC is available for the entire coterminous U.S. on a grid of about 7.5 miles (12 km) on a side.

In addition to temperature and precipitation, VIC's groundwater recharge estimates take into consideration a particular location's land surface, vegetation and soil type. Those factors influence whether water on the landscape evaporates, runs off or soaks into the ground and recharges the aquifer.

For projections of future temperature and precipitation during the near future (2021-2050) and the far future (2071-2100), the researchers used 11 different global climate models. The scientists then plugged the future climate estimates from each of the 11 models into the VIC model to generate projected groundwater recharge scenarios.

For each region and time period, the researchers compared the projected groundwater recharge with the recharge during 1971-2000.

For the near future, the majority of models projected that recharge will increase in the northern Rockies and Plains region. The models agreed that groundwater recharge would decrease for the west and southwest regions. For the south and northwest regions, the projections were more uncertain and decreased and increased, respectively.

The difference among the recharge projections from the 11 global change models reflects the difference in future regional precipitation that the models project, the authors write.

This new research provides a broad picture of how climate change may alter groundwater recharge in the future, Meixner said.

Managing groundwater now and in the future is the role of management and policy, Meixner said.