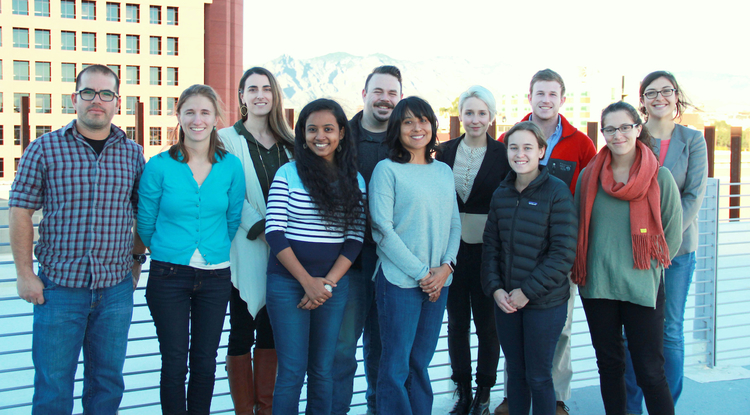 The new cohort is out to change the world for the better with the help of $55,000 from the Carson Scholars Program.
Tessa Patterson
,
UA Institute of the Environment
Jan. 11, 2017
Resources for the Media

Tamee Albrecht, a doctoral student in the University of Arizona School of Geography and Development and an Institute of the Environment fellow, is exploring interactions among groundwater, livelihoods, hydropower and climate change to better understand why springs are drying up in areas of the Himalayas.

Megan Mills-Novoa, an Agnese Nelms Haury fellow and a doctoral student in the School of Geography and Development, is examining how agricultural landscapes and livelihoods are transformed under climate-change adaptation projects in the arid Andes Mountains.

Another Haury fellow, Amado Guzman, a doctoral student in the Department of History, is researching the environmental history of New Mexico and the Southwestern borderlands, with a focus on irrigation and dryland agriculture and land use.

All are members of the new cohort of 11 students awarded a total of $55,000 through the Carson Scholars Program, which funds graduate students majoring in interdisciplinary environmental research. The program trains scholars to clearly and effectively communicate the significance of their work to a broad audience.

"The Carson Scholars Program has helped propel UA environmental scholarship to the highest level, not just by helping the UA recruit the best interdisciplinary graduate students, but also in establishing a new paradigm for linking environmental scholarship with use and understanding in the public. It's wonderful to see another great cohort of scholars," said Jonathan Overpeck, director of the UA's Institute of the Environment.

The Institute of the Environment, the Agnese Nelms Haury Program in Environment and Social Justice, and Biosphere 2 fund the scholarship program. Dedicated to Rachel Carson, a marine biologist and pioneer of the modern environmental movement, the Carson Scholars Program has awarded $320,000 to 64 graduate students from departments and schools across campus since it launched in 2011.

The Agnese Nelms Haury Program in Environment and Social Justice has invested in six of the new Carson Scholars whose research represents commitment to addressing environmental and social justice challenges "and who, we believe, will become change makers in research, education and implementation," said Anna Spitz, director of the Haury program.

The cohort includes Alex Erwin, a student in the James E. Rogers College of Law and a doctoral student in genetics, one of the UA's Graduate Interdisciplinary Programs, called GIDPs.

Erwin, also an Institute of the Environment fellow, is conducting a genomic study of black-tailed prairie dogs, which once lived in the state, to re-establish a population in the animals' former range. He also is studying the effect of sport hunting on mountain lion populations in the Uncompahgre Plateau in Colorado to better inform the management decisions that go into hunting regulation.

Biosphere 2 fellow Rebecca Beadling, a doctoral student in the Department of Geosciences, is studying how the ocean influences climate, with a specific focus on climate modeling and the Atlantic Meridional Overturning Circulation. This large-scale circulation plays an important role in distributing heat and carbon throughout the world's oceans, but its strength has decreased as greenhouse gases have increased. Beadling said the goal of her research is to better understand what drives the circulation and to improve climate modeling.

Haury fellow Rodolfo Peon is studying the integration of high-concentration solar photovoltaics, or HCPVs, with desalination technology to provide communities on the Navajo Nation with drinking water and electricity simultaneously. HCPVs use more efficient solar cells than conventional photovoltaics, resulting in the possibility of collecting heat for household applications. Peon, a doctoral student in Arid Lands Resource Sciences, a GIDP, also is exploring environmentally friendly ways to use generated brine for agricultural purposes.

Other scholars and their projects are: