As OSIRIS-REx flies past Earth, members of all mission teams come together at the UA for the first time to rehearse spacecraft operations.
Daniel Stolte
,
University Communications
Sept. 20, 2017
Resources for the Media
Extra Info:

Activities of interest in the coming week regarding the OSIRIS-REx mission: 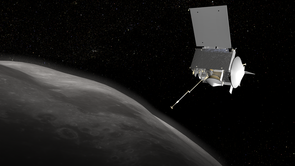 OSIRIS-REx is scheduled to arrive at Bennu, a primitive carbonaceous asteroid, in the fall of 2018. After surveying Bennu for two years, the spacecraft will extend its sampling arm to touch down on the asteroid's surface and collect a sample of pristine asteroid material.
Asteroid Bennu’s orbit around the sun is tilted at a 6-degree inclination from Earth’s orbit. On Friday, the OSIRIS-REx spacecraft will use the Earth’s gravity to boost itself onto Bennu’s orbital plane. (Photo: Heather Roper/UA)

As you are reading this, a spacecraft is coming right at you.

Hurtling toward Earth at 19,058 mph, the OSIRIS-REx spacecraft has completed one orbit around the sun since its launch on Sept. 8, 2016. The robotic explorer of the University of Arizona-led asteroid sample return mission is now readying itself for a maneuver that will place it on a trajectory to catch up with Bennu, its target asteroid, a year from now.

In preparation for the Earth gravity assist maneuver, members of all teams involved in the mission are flocking to the UA's Michael J. Drake Building to rehearse operations that the spacecraft will have to perform once it reaches Bennu and begins its surveying campaign to get ready to grab a sample of asteroid material and bring that back to Earth.

"This is the first time for members of all teams to be located here at the Drake Building and lace together as one team," says deputy principal investigator Heather Enos, who has been involved in several NASA missions in which the UA participated. "Our biggest challenge is coordinating all the moving parts. Staying organized requires knowing each other very well and, most of all, trust. Whoever you delegate to can open your door at any time and say, 'We need to talk.'"

During the weeklong, carefully orchestrated move, the probe will approach Earth to within 10,700 miles, well below the orbit of geostationary satellites. It will then dive south under Antarctica, and up over the Pacific Ocean, before setting sail for its journey through outer space to rendezvous with Bennu. As it speeds away from Earth, it will look back and take pictures of the Earth and moon.

Unlike most such maneuvers, which are designed to accelerate a spacecraft by "stealing" momentum from a planetary body's orbit around the sun, OSIRIS-REx will use Earth to change its orbital plane, in a similar way that a skillful throw of a line onto a mooring pole can help a skipper maneuver a boat around a dock.

According to Erin Morton, communications lead for the OSIRIS-REx mission, OSIRIS-REx is one of only a few NASA spacecraft that have performed an Earth gravity assist maneuver, or EGA.

A Need for Speed? Not Really

"This is not about gaining speed," Morton says. "We have all the speed we need to catch up with Bennu. But to get onto the asteroid's orbit, OSIRIS-REx has to boost itself slightly above the plane on which Earth travels around the solar system. Placing it onto that trajectory at launch would have required excessive amounts of rocket fuel, so we're using Earth's gravity instead."

The close encounter provides mission scientists and engineers with the first opportunity since the spacecraft's launch to gather at the OSIRIS-REx Science Processing Operations Center, or SPOC, in the Drake Building, which is a short distance northwest of the UA main campus. Referred to as a co-location by mission managers, the weeklong activities provide a valuable opportunity to rehearse procedures and test and calibrate scientific instruments. As many as 30 scientists, technicians, engineers and other mission members — including several representatives from out of state — are expected to work together during the flyby. Once OSIRIS-REx gets to asteroid Bennu, SPOC will bustle with about 120 people at any given time.

Unlike most space missions, in which the science team members leave most of the spacecraft's day-to-day operations to the flight and system engineers and only spring into action once the craft begins to send science data back to Earth, OSIRIS-REx is more similar to a 17th-century expedition aboard a sailing ship. Just as the naturalists were part of the trip, studying foreign waters and lands as they encountered them, discoveries made by the OSIRIS-REx scientists will be used to inform the spacecraft's operations. Such a high level of intertwined overlap among teams is unusual, according to Morton.

"Much of this mission is about reconnaissance," she explains. "Until we actually get to the asteroid, we won't know what to expect, and what potential hazards might be awaiting the spacecraft."

Lead science operations engineer Sara Knutson, who graduated from the UA with a master's degree in engineering management, has spent the year since launch with her team mapping out what actions the science payload instruments aboard the spacecraft will be performing once at the asteroid — down to the hour. This includes planning all the observations the science instruments will be performing while it orbits Bennu to survey the asteroid in preparation for selecting a sample site.

"Let's say one of the mission scientists wanted to look at a particular swath of material on the asteroid surface," Knutson says. "My team members would then determine where we have to point the spacecraft, and what we have to do once we are in that position — for example, which cameras or spectrometers have to be turned on at what times."

Precision for the Payload

Knutson's team writes commanding sequence products that lay out the exact steps for any given operation of the spacecraft's science payload — in a sense, they allow the ground crew to talk to the spacecraft and control every one of its activities.

"For example, how do we need to orient the spacecraft if we want to point a camera at a science target?" Knutson says. "How do we need to orient the solar panels to ensure we have enough power to acquire the science objective we are looking for, and how long can we remain in that position before we run out of power? Those are the kinds of questions that we ask and develop protocols for."

Before any commands are sent, her team thoroughly tests each data product and works with the spacecraft team to make sure everything is within specs. Once a science operation has been performed, Knutson's team verifies that every task was completed as planned.

"Let's say a scientist asked for pictures or spectrometric data of a site on the asteroid," Knutson says. "Our job is then to check: Did we get all 250 images from the spacecraft, or are we missing an hour's worth of spectrometer data? Our team monitors all that. There is a constant cycle of reviewing an action and feeding the results back into future plans. We want to make sure we keep track of what we have learned to adjust our procedures for future operations."

Taking pictures of the Earth and moon provides a critical opportunity to calibrate the spacecraft's instruments, according to Knutson, as it ensures that the instruments work as intended once they are at the asteroid.