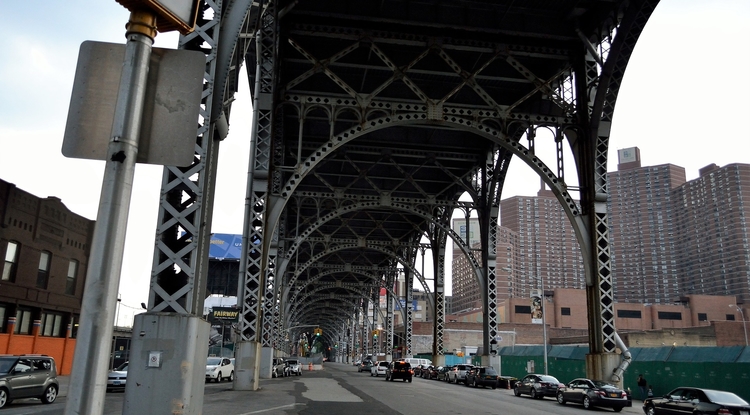 A UA-led research team is developing a broadband network in Harlem for free, public use.

A research team led by the UA is working with community stakeholders to make the Manhattan neighborhood a place where computing is inexpensive, fast and secure for all residents — not just the tech-savvy and the well-to-do.
Emily Litvack
,
UA Research, Discovery and Innovation
Nov. 27, 2017
Resources for the Media 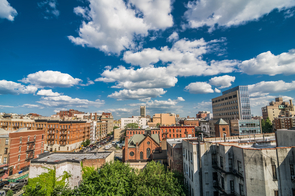 "We want to make sure (Harlem) stays as innovative in terms of cultural heritage as it was back in the 1920s," says Bryan Carter, an associate professor of Africana studies at the UA.
Bryan Carter's Virtual Harlem Project allows users to experience, virtually, nine blocks of Renaissance-era Harlem, including the interior of the New York Public Library. For this project, Carter is developing similarly interactive, educational content. 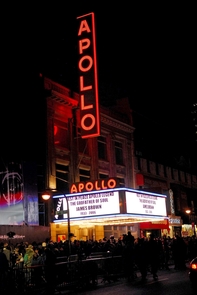 The famed Apollo Theater in Harlem

If you want to use one of the internet-connected computers at the Harlem Library in New York City, you'll have to make a reservation. With broadband costing residents $55 per month on average, one in four Manhattan households goes without. As one of the few bastions of free internet for public use, the library is a happening place, and a 45-minute computer session is arguably among its most coveted amenities. All day, every day, its computers are in use.

But a research team led by the University of Arizona wonders, "Can we not do better?" The team's new project is based on the premise that we can. The endeavor to bring cheap, fast, secure computing to the people in Harlem is funded by a three-year, $1 million grant from the National Science Foundation.

"What we're trying to do, ultimately, is to break down barriers to technology," said Dan Kilper, leader of the project and a research professor in the UA's College of Optical Sciences.

It starts by reimagining broadband and the computer itself.

Take, for example, streaming an episode of a show on Hulu. To do this, a computer needs to communicate with "the cloud."

"When we talk about 'the cloud,' we're talking about massive numbers of computers," Kilper said.

Those computers run in what's called hyperscale data centers, owned and operated by companies such as Microsoft, Google and Amazon. In 2016, there were only 135 such centers in the U.S., so it wouldn't be unusual for a computer in Harlem to have to communicate with a server in Seattle — part of the cloud — to stream the show.

The UA-led research changes that. It brings the cloud closer to the end user via a setup called "edge cloud" computing. With an edge cloud, the data centers are smaller and located right in the cities they serve.

"So several racks of servers might be located in a building in Manhattan," Kilper said.

The next part of the project is changing computers themselves by moving the computing power — the processor — to the edge cloud. When a computer streams a show, its processor is constantly fetching, decoding and executing instructions to play that show. It's the workhorse of the laptop and, not surprisingly, it's expensive, especially for those who want high performance. The edge cloud is affordable, without skimping on performance.

When you take the processor away, what's left is called a "KVM" system — basically just a keyboard, monitor and mouse. The only computing a KVM does is to make a network connection and display what's being done on a nearby server.

"Our changing society demands participation not only in the physical world but in the digital world," said UA President Robert C. Robbins. "This grant will enable some truly incredible work at the University of Arizona that exemplifies an intersectional approach to the economy, technological advancement and service to society. This is a paradigm shift in computing access that will help ensure that everyone can participate in this new era of converging digital, physical and biological technologies."

Malathi Veeraraghavan, professor of electrical and computer engineering at the University of Virginia, is working alongside Kilper to develop both the high-speed network and the KVMs.

After setting up the network and building about 100 of these novel KVMs, the team will distribute KVMs throughout Harlem for free, public use. They are collaborating with Silicon Harlem, a startup focused on securing Harlem's role as a tech and innovation hub, to decide where exactly in the borough those KVMs end up.

To address the legal and governmental complexities of a community-owned network like this, Kilper is collaborating with Olivier Sylvain, associate professor of law at Fordham University, and Sheila Foster, professor of public policy and law at Georgetown University. Rider Foley, assistant professor of engineering and society at the University of Virginia, will explore the social challenges facing underserved communities in Harlem.

"We definitely want to eventually build toward a larger implementation of this and find ways to replicate it in other communities," Kilper said.

The benefits of such a system are many. It's cheaper to buy a KVM than a computer with a pricey processor. The edge cloud also will have more processing power than what one gets with a computer. That means faster browsing, streaming and gaming.

"Especially if you want high-performance computing, centralizing the processing is a better setup. Plus, with edge-cloud capability, because it's much closer to the end user, you get reliable bandwidth," Kilper said. "And to connect these edge cloud data centers, we're also making use of a dark fiber optical network testbed that we've built in Harlem funded through another National Science Foundation grant."

By combining edge cloud computing and KVMs, users wind up with much stronger security, too.

"One of the biggest vulnerabilities we have with our machines today is that if you don't update your software and make sure you have firewall installed, your machine becomes vulnerable," Kilper said. "You might click on a phishing email with a Trojan, but if we've taken the processor out of your machine, it's not going to affect anything."

Instead, the attack would be on the edge cloud servers, which would be well-maintained, secured machines managed by IT professionals.

"If you think about the automobile, in my father's day, everyone knew how to fix and service an automobile. Now cars are sophisticated and it's a lot more complicated to even change your own oil in today's cars, so many people don't," Kilper said. "You want to move to a model where you let the experts take care of things."

What people actually do with this new technology is where Bryan Carter comes in. Carter is an associate professor of Africana studies at the UA. His well-known Virtual Harlem Project allows users to experience, virtually, nine blocks of Renaissance-era Harlem.

Making broadband accessible is one thing, Carter said, but providing cultural, educational content to go along with it is another — and it's equally important.

"I understand those interactive elements necessary to engage a variety of audiences," Carter said, "so my role is to look at the use of the technology and design different types of high-quality content that can be delivered over a secure, high-speed network."

Carter said one piece of content he will design is a virtual reality tour of the neighborhood's Apollo Theater as it was in the 1920s. The tour will include features such as interviews with knowledgeable historians and clips of performances by legendary artists such as Billie Holiday and James Brown.

"We want to make sure the neighborhood stays as innovative in terms of cultural heritage as it was back in the 1920s," Carter said. "Taking people back in time, in a 3-D environment (is one way to inspire)."

Driving each member of the team is the problem of a growing digital divide.

Nearly half of American adults with household incomes of less than $30,000 don't have home broadband service or a traditional computer. And as more and more aspects of our lives move online, the digital divide — that is, socioeconomic inequality between those who have access to internet-connected computers and those who don't — widens.

"University of Arizona research is inherently interdisciplinary, daring to do the unconventional," said Kimberly Andrews Espy, the UA's senior vice president for research. "By leveraging the UA's outstanding research expertise and working at the intersection of optical sciences and digital humanities, this project will not only create real innovation, but also enhance the quality of life for community members in Harlem."

For the research team, this is a problem in dire need of resolution. Today, Kilper argues, broadband is just as important to the well-being of a community as utilities such as water and power. The fewer barriers to access, the better.

"A smart city's smartness should be working for all of its residents, so that's what we're trying to accomplish, first, in Harlem," Kilper said.