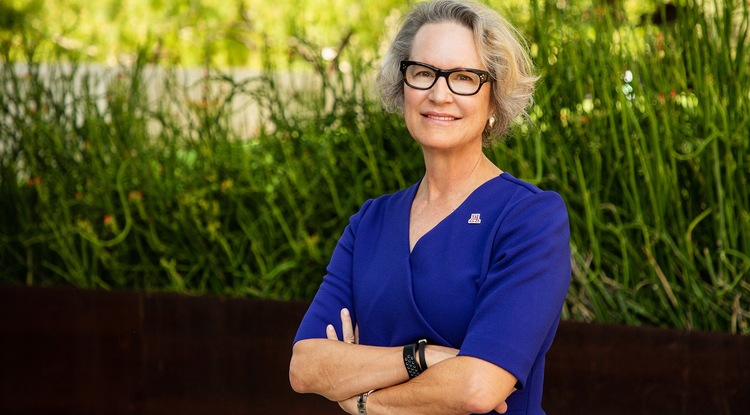 Elizabeth “Betsy” Cantwell, senior vice president for research and innovation, has been elected a 2019 fellow of the American Association for the Advancement of Science.

Head of Research Recognized by AAAS in New Class of Fellows

The American Association for the Advancement of Science, the world's largest general scientific society, will honor Elizabeth “Betsy” Cantwell and other inductees at a ceremony in February.
Office of Research, Innovation and Impact
Nov. 26, 2019
Resources for the Media
Extra Info:

The tradition of AAAS Fellows began in 1874. This year, 443 members have been awarded this honor by AAAS because of their efforts toward advancing science applications that are deemed scientifically or socially distinguished. Visit the AAAS website for a complete list of 2019 AAAS Fellows.

Elizabeth “Betsy” Cantwell, senior vice president for research and innovation at the University of Arizona, has been elected a 2019 fellow of the American Association for the Advancement of Science, or AAAS, the world's largest general scientific society.

Election as an AAAS fellow is a distinction bestowed on AAAS members by their peers. An induction ceremony will take place Feb. 15 during the 2020 AAAS Annual Meeting in Seattle.

As part of the Section of Industrial Science and Technology, Cantwell was elected as an AAAS Fellow for distinguished leadership of science and engineering programs in environmental protection, space, homeland and global security, and economic development.

"I am incredibly honored to be an elected fellow of the American Association for the Advancement of Science," Cantwell said. "Being recognized by my peers is especially rewarding when the opportunities for collaboration in pursuit of the advancement of science and engineering have never been greater. I'm grateful to be in a position to play a role in meeting the challenges of the fourth industrial revolution and to translate research and innovation into positive impact.”

Cantwell leads the Office of Research, Innovation and Impact, which includes the university’s research enterprise, Corporate Engagement Program, Tech Launch Arizona, Tech Parks Arizona and Arizona Forge. She is responsible for expanding the university’s capacity for knowledge creation and discovery; integrating efforts by faculty, students, staff and executive leaders to move inventions and technologies to the marketplace; increasing the university’s connectivity with external collaborators; spearheading industry and public partnerships; and increasing total research funding as the university pursues its goal of being the premier innovation center in the Southwest.

Before joining the university, Cantwell served as the CEO of Arizona State University Research Enterprise, a nonprofit organization dedicated to advancing the university’s applied research and development, and as a professor of practice in engineering. Previously she served as ASU’s vice president for research development. During her tenure in that role, annual research expenditures grew by more than $150 million to a total of $610 million.

Cantwell is also a member of the National Research Council’s Aeronautics and Space Engineering Board; the National Academies of Sciences, Engineering and Medicine; and the Space Telescope Science Institute, operated by the Association of Universities for Research in Astronomy.