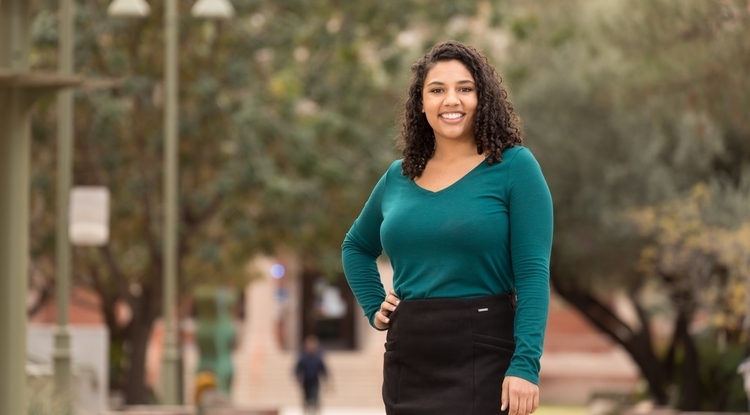 Leah Crowder, who earned her bachelors degree in Middle Eastern and North African studies at the UA, will study international relations at Oxford as a Rhodes scholar. (Photo: Chris Richards/UA Alumni Association)

For Her Next Juggling Act, UA Rhodes Scholar Will Pursue Global Passion at Oxford 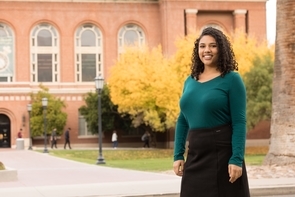 Leah Crowder is one of 32 recently named Rhodes scholars and the only one from an Arizona university. (Photo: Chris Richards/UA Alumni Association) 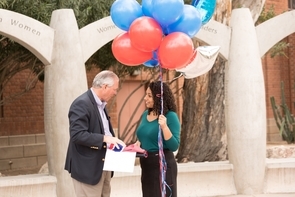 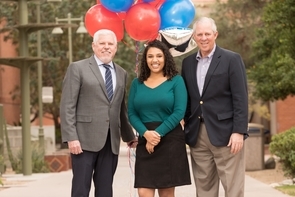 Life can be more about skilled juggling than controlling every part of the journey. Literally and figuratively, Leah Crowder, a newly minted Rhodes Scholar and recent UA Honors College graduate, has grabbed on to what's been tossed her way.

It was her diligence, commitment and agility with languages that landed her in Turkey as a teenager doing social circus therapy with displaced and marginalized young people between academic years.

The American Circus Educators define social circus as "a social change intervention that uses the circus arts as a tool for fostering personal and social development of identified 'at-risk' individuals."

From Crowder's perspective, "It gives children and youth an 'equalizer' experience where they're all on equal footing going in. At the same time, safe spaces to re-socialize with others in healthy ways are created."

With outcomes ranging from increased self-esteem to greater trust in others, circus arts are portable and have no cultural or language bias.

"You don't really think about the circus when talking about international conflict or development, but what Arts Anywhere Association does is amazing," Crowder said. "And a big part of that is because it came from the community. The work in Turkey taught me that there are many different paths to contribute to the community.”

The trip to Turkey was a natural extension of Crowder's journey from her childhood home in rural Virginia to diverse communities around the world, including three years in Japan, as part of a military family.

One pivotal stop along the way was the Maggie L. Walker Governor's School for Government and International Studies, which offered lessons in 11 languages. Crowder's early academics at the Richmond-area magnet school imparted a sense of possibility grounded in independence, inclusiveness and strong ties with peers as well as faculty.

Fast-forward to a six-week study program in Kazan, Russia, where Crowder's growing language fluency accelerated dramatically near the banks of the Volga and Kazanka Rivers between her sophomore and junior years of high school.

Focused on international work, she applied for a post-9/11 cultural exchange program in either Bosnia or Macedonia two years later.

State Department program leaders decided Turkey would be the best fit for Crowder, who completed her senior year of high school as an American in Aydin, Turkey.

Once back in the United States, Crowder started her studies at the UA, where she completed a B.A. in Middle Eastern and North African studies with a 4.0 GPA and graduated with honors in May 2018. She promptly began pursuing a master's in the same program while also returning to the field.

In Turkey for a third time last summer, Crowder worked in ethnically diverse border communities where she bounced between learning juggling, braving the trapeze, making herself available to marginalized young people and their families, and serving primarily as a translator for other volunteers and staff.

Her efforts were in support of the Arts Anywhere Association, which was equipping older "Circus Heroes" to mentor younger participants without prolonging the need for international training assistance.

Along the way, Crowder received some mentoring of her own from UA Honors College advisor David Neufeld, who convinced her to apply for the Rhodes Scholarship.

"Her ability to connect makes her an effective cross-cultural mediator to bring people together around common purposes," Neufeld said of Crowder, who took his advice and became one of more than 2,500 Rhodes Scholarship nominees.

After a grueling process that culminated in interviews in San Francisco, she emerged as one of 32 Rhodes Scholarship winners in the United States.

Once again, Crowder has additional balls in the air, some more like 12-pound Brunswick bowling balls than 4-ounce juggler's orbs. But confronting multiple and concurrent challenges, whether improving the lives of at-risk youth or applying for a global scholarship, is simply part of her identity.

So is finding the harmony between scholarship and the gritty realities of those displaced by conflict.

"There's traditionally been little connection between research and grassroots aid work, even though each of them has much to gain from the other," Crowder said.

According to those who know Crowder, she's been bridging gaps not only academically, but also between groups of people since her earliest days as an undergraduate at the UA.

"Leah has proven to be an exceptional student during her time at the University of Arizona," said UA Provost Jeff Goldberg. "I have no doubt her passion for education combined with her desire to solve global problems will make a difference in the lives of people around the world."

While the Rhodes Scholarship is a powerful and generous award that can flow into continued studies such as the doctorate Crowder envisions, its financial worth of up to $250,000 is only one measure of its value. Crowder’s exposure to other points of view will expand exponentially when she joins students from more than 60 countries at Oxford University in October 2019.

"Walking down the street, you hear so many languages and people come from so many different places. Beyond that, the Rhodes House offers a lot of fantastic leadership development training and engagement opportunities," she said. "I'm open to whatever seemingly random experiences come my way."

Some of them, she anticipates, may result in solutions for the problems of those displaced by conflict. By way of scale, the United Nations Refugee Agency placed the number of internally displaced people – those forced to flee their homes to elsewhere in their own country – at 40 million by the end of 2017. Those who have fled their own countries added over 28 million.

The list of U.S. governmental, organizational and corporate leaders who've studied as Rhodes Scholars since 1904 is long and impressive. Does Crowder see herself working as a policy maker following the completion of her D. Phil (Oxford's Ph.D. equivalent) in international relations?

"Post-conflict reconstruction starts at the community level. That's been my focus, and we'll see where it leads as I don't have any clear-cut path forward," she said. "I really appreciate the opportunity I have to be creative in how I give back and how I forge my own career."

One word of warning, however, in connecting with this capable Rhodes Scholar. Be prepared to get schooled if the call goes out to juggle, walk on stilts or clown. Or if the race is on to translate a conversation between a growing range of languages including French, Russian and Mandarin. 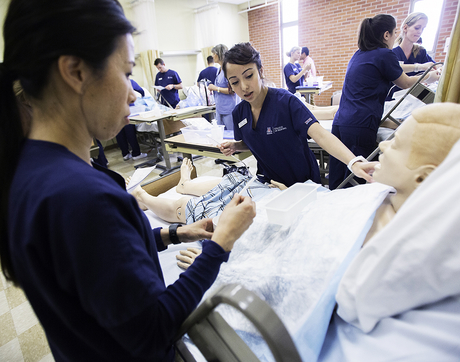