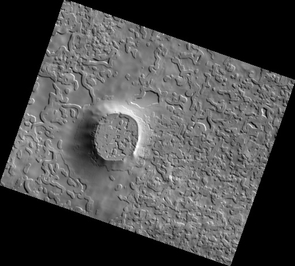 The High Resolution Imaging Experiment (HiRISE) camera operated at The University of Arizona returned this image (PSP_03118_0925) of "Swiss cheese" terrain found near Mars' south pole. The terrain is rich with carbon dioxide ice, which changes the shape of mesas and pits. Carbon dioxide sublimates during summer and is redeposited as frost and ice in winter. What looks at first glance to be a large mesa in this image is really a crater. (Image: NASA/JPL/University of Arizona) 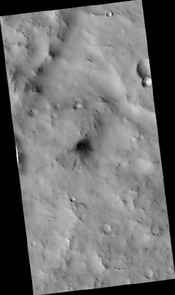 The High Resolution Imaging Experiment (HiRISE) camera operated at The University of Arizona returned this image (PSP_003101_2065) of a very recent dark impact crater. The impact happened only a few years or decades ago. The crater itself is small -- only about 60 feet wide -- but the impact formed a dark spot almost 3,000 feet across and created "rays" stretching more than two miles away. The impact removed or distrubed lighter dust covering the surface, creating the dark markings. (Image: NASA/JPL/University of Arizona) 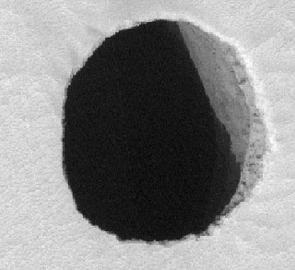 The High Resolution Imaging Experiment (HiRISE) has confirmed that a dark pit seen on Mars in an earlier HiRISE image really is a vertical shaft that cuts through lava flow on the flank of the Arsia Mons volcano. Such pits form on similar volcanoes in Hawaii and are called "pit craters."

The HiRISE camera, orbiting the red planet on NASA's Mars Reconnaissance Orbiter, is the most powerful camera ever to orbit another planet. It is operated at The University of Arizona in Tucson. HiRISE Principal Investigator Alfred McEwen of the UA's Lunar and Planetary Laboratory and his team released the new image of the dark pit on Arsia Mons and several other stunning images today on the HiRISE Web site, http://hirise.lpl.arizona.edu. New HiRISE images are released on the site every Wednesday.

The UA-based HiRISE team also released another 930 images to the Planetary Data System (PDS), the U.S. space agency's mission data archive, today. These images, taken between May and July 2007, include a view of what at first glance looks deceptively like a mesa set in Swiss cheese terrain. But it's a case of "trompe l'oeil," an eye trick -- the feature is a crater.

The "Swiss cheese" terrain is carbon dioxide ice that "sublimates," or thaws from a solid directly into gas, during the summer, which it currently is at this south polar region of Mars. Carbon dioxide sublimating on steep slopes changes the shape of pits and mesas from year to year. The large depression in this image might be an impact crater, McEwen said, although it's hard to be sure because there's no raised rim or ejecta. Impact craters on the ice cap are modified as the ice-rich terrain "relaxes" over time and as they are resurfaced by the annual deposition and sublimation of frost and ice.

Another image shows a very recent "rayed" dark impact crater among older pocks in the lighter, dust-covered surface. An extremely recent impact, perhaps only a few years or decades ago, created the dark spot with radial and concentric patterns in this HiRISE image. The small central crater is only about 18 meters wide (60 feet), but it formed a dark spot 700 meters wide (two-fifths mile) with rays of secondary craters reaching as far as 3.7 kilometers (more than two miles) from the central crater, McEwen said. Secondary craters are rocks ejected from the central crater. "This region of Mars is covered by dust, and the impact event must have removed or disturbed the dust to create the dark markings," McEwen said.

All HiRISE images released to the PDS can be viewed from the HiRISE site. There also is a direct link to the full directory listing at http://hirise-pds.lpl.arizona.edu/PDS.

Today's release adds another 1.8 terabytes to the PDS. The project turned over its first 1,200 HiRISE images to PDS last May. The PDS now holds a total 3.5 terabytes of HiRISE data, one of the largest single datasets returned from a spacecraft and archived in NASA's space mission library.

Internet users can explore the images with the user-friendly "IAS Viewer" software that can be downloaded from the HiRISE Web site. IAS-Viewer technology allows users to quickly explore part of an enormous HiRISE image because the software transmits only as much data as needed to render any selected part of the image on a computer screen. The tool delivers a high-resolution view of the selected part of the image regardless of slow or limited Internet connections.

The HiRISE camera takes images of 3.5-mile wide (6 kilometer) swaths as the orbiter flies at about 7,800 mph between 155 and 196 miles (250 to 316 kilometers) above Mars' surface. HiRISE science imaging began in November 2006 and will continue at least through November 2008.

Information about the Mars Reconnaissance Orbiter spacecraft is online at http://www.nasa.gov/mro. The mission is managed by NASA's Jet Propulsion Laboratory, a division of the California Institute of Technology, Pasadena, for the NASA Science Mission Directorate, Washington, D.C. Lockheed Martin Space Systems, Denver, is the prime contractor and built the spacecraft. Ball Aerospace and Technologies Corp., Boulder, Colo., built the HiRISE camera operated by The University of Arizona.