UA students in the sustainable built environments program prepare to interact via virtual exchange with their peers from the American University in Cairo.

Harnessing Innovation through Virtual Exchange, or HIVE, is buzzing at the UA and at the American University in Cairo as classrooms transform into global hubs of knowledge.
Jordyn Stinnett
,
UA Global
Aug. 27, 2018
Resources for the Media
A screenshot of students and professors from the American University in Cairo preparing to present commercial building design projects to their peers at the UA. 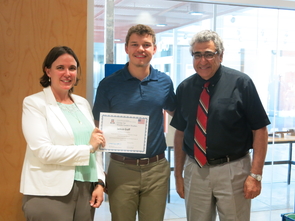 Last spring, University of Arizona students listened intently to a presentation from their peers about the design of an energy-efficient business center. They asked questions about the design's climate-responsive nature, provided feedback to optimize the building's thermal performance and commended their peers for creating a design with energy efficiency in mind.

As they parted ways, some students walked into the rising temperatures of Tucson, while others stepped out under the stars in Cairo.

Harnessing Innovation through Virtual Exchange, or HIVE, launched with students from the UA College of Architecture, Planning and Landscape Architecture, who collaborated with their peers at the American University in Cairo during four virtual classroom sessions.

In between video conferencing, the students connected through FaceTime, Skype and email to share strategies for creating energy-efficient commercial buildings.

"We went through conversations as if we were in the same classroom, in the same place, even though we were on opposite sides of the planet," said Jackson David Graff, a UA senior majoring in sustainable built environments. "I have a goal of going into ministry, so this was a great opportunity to understand other people's perspectives."

Nader Chalfoun, a professor of architecture and environmental sciences, developed a curriculum to demonstrate how faculty members and students from two universities could evaluate and enhance the energy efficiency of commercial buildings.

"The collaboration between the UA and Cairo provides so many opportunities, particularly in terms of cultural exchange for students," he said. "From an academic perspective, it's also very important that we have international benchmarks to understand where we are in relation to other places, particularly with our teaching and the effect of our teaching.”

Three additional HIVE classes focusing on natural resources, sustainable design and computer engineering launched this fall. Chalfoun is leading an environmental science course, while Rachel Gallery, an assistant professor in the School of Natural Resources and the Environment, is teaching on natural resources ecology. Salim Hariri, a professor of electrical and computer engineering, is leading a class on distributed computing systems.

Julie Ellison-Speight, assistant director of the UA Center for Middle Eastern Studies, is coordinating the HIVE program in partnership with faculty members and UA Global. She sees the program as a window to the Middle East, particularly for students who are unable to study abroad or for areas where travel is restricted.

"When it went live for the first time and we saw the students in Cairo, it was a roar of excitement," she said. "After the first few presentations, the students really started working together and the questions were rolling. It was a class as if everybody was sitting in the same room, but a world away."

All HIVE programs at the UA operate in the English language. As a proficient speaker of both Arabic and Persian, Ellison-Speight is acutely aware of the power of language, but said the emphasis on other disciplines is a benefit to the HIVE program.

"When speaking another language, the narrative is defined by your level of that language. But when the connection is something else and you are on the same playing field with language, it makes it initially easier to learn more about a culture," she said. "My hope is that UA students get a taste of another culture and then decide to study Arabic. I hope this opens doors."

Dale LaFleur, senior director of international partnerships with UA Global, sees the classes as a way to enhance learning and to strengthen ties with a top university in Egypt.

“The UA’s partnership with the American University in Cairo dates back to 1983, when the internet did not exist,” she said. “Introducing program models such as HIVE allow international partners to sustain their collaboration as the field of international education evolves.”

The HIVE program also provides students with a good way to gain experience in an increasingly global marketplace.

“This was a really interesting way to learn about other cultures, rather than just reading about them in a book,” said Patricia Horn, who is working toward a master’s degree in design and energy conservation at the UA. “I definitely want to work in consulting and I know a lot of those opportunities are international, so this was a great opportunity.”

The UA applied and received funding for the year-long HIVE program through the Institute of International Education, which distributed the award on behalf of the Stevens Initiative. Named for the late J. Christopher Stevens, who served as a U.S. ambassador to Libya, the effort seeks to transcend political and financial boundaries by uniting students from the U.S. and the Middle East through technology.