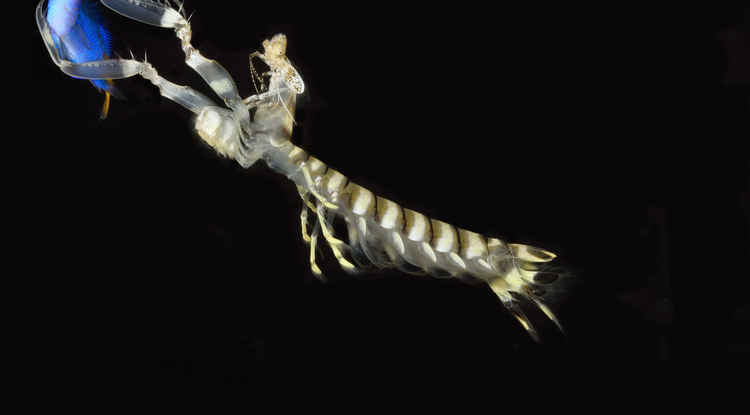 With exceptionally keen vision and the fastest strike in the animal kingdom, mantis shrimp are formidable predators of coral reefs around the world. (Photo: Roy L. Caldwell/University of California, Berkeley)

How Mantis Shrimp Make Sense of the World

Researchers traced neural connections in a newly discovered brain region of mantis shrimp, gaining new insights into how the fierce predators are able to make sense of a breathtaking amount of visual input.
Daniel Stolte
,
University Communications
Nov. 25, 2019
Resources for the Media 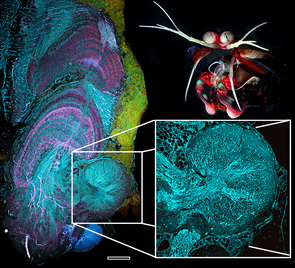 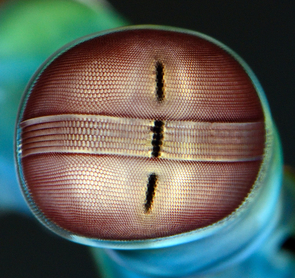 A close-up of the unique architecture of the mantis shrimp eye. (Photo: Roy L. Caldwell/University of California, Berkeley)

A study involving scientists at the University of Arizona and the University of Queensland provides new insight into how the small brains of mantis shrimp – fierce predators with keen vision that are among the fastest strikers in the animal kingdom – are able to make sense of a breathtaking amount of visual input.

The researchers examined the neuronal organization of mantis shrimp, which are among the top predatory animals of coral reefs and other shallow warm water environments.

The research team discovered a region of the mantis shrimp brain they called the reniform ("kidney-shaped") body. The discovery sheds new light on how the crustaceans may process and integrate visual information with other sensory input.

Mantis shrimp sport the most complex visual system of any living animal. They are unique in that they have a pair of eyes that move independently of each other, each with stereoscopic vision and possessing a band of photoreceptors that can distinguish up to 12 different wavelengths as well as linear and circular polarized light. Humans, by comparison, can only perceive three wavelengths – red, green and blue.

Therefore, mantis shrimp have much more spectral information entering their brains than humans do. Mantis shrimp seem to be able to process all of the different channels of information with the participation of the reniform body, a region of the animal's brain found in the eye stalks that support its two protruding eyes.

Using a variety of imaging techniques, the team traced connections made by neurons in the reniform body and discovered that it contains a number of distinct, interacting subsections. One particular subunit is connected to a deep visual center called the lobula, which is structurally comparable to a simplified visual cortex.

"This arrangement may allow mantis shrimp to store quite high-level visual information," said Strausfeld, senior author of the paper that was published in The Journal of Comparative Neurology.

"Mantis shrimp most likely use these subsections of the reniform body to process different types of color information coming in and organize it in a way that makes sense to the rest of the brain," said lead author Thoen. "This would enable them to interpret a large amount of visual information very quickly."

One of the study’s crucial findings was that neural connections link the reniform bodies to centers called mushroom bodies, iconic structures of arthropod brains that are required for olfactory learning and memory.

"The fact that we were now able to demonstrate that the reniform body is also connected to the mushroom body and provides information to it, suggests that olfactory processing may take place in the context of already established visual memories," said Strausfeld, Regents Professor of neuroscience and director of the Center for Insect Science at the University of Arizona.

The discovery of the reniform body, however, is not limited to mantis shrimp. It has been identified in other species as well, including shore crabs, shrimp and crayfish.

In 2016, an Argentinian group discovered that, in crabs, what are now known as reniform bodies act as secondary centers for learning and memory. According to Strausfeld, this suggests that the formation and storage of memories occurs in at least two different and discrete sites in the brain of the mantis shrimp and likely other members of malacostracans, the largest class of crustaceans. In addition to mantis shrimp, malacostracans include crabs, lobsters, crayfish, shrimp, krill and other less familiar species that together account for about 40,000 living species and a great diversity of body forms.

Reniform bodies have not been identified in insects and may be uniquely crustacean attributes, the researchers say. Alternatively, they might be homologous to a structure found in insect brains called the lateral horn, which sits between the optic lobes and the mushroom bodies. Strausfeld pointed out that fruit fly research done by other groups showed that the lateral horn is crucial in assigning values to learned olfactory information.

"The hunt is now on to determine if insects have a homologous center," he said. "If we are looking for homologs in other arthropods, the reniform body would be the obvious candidate."