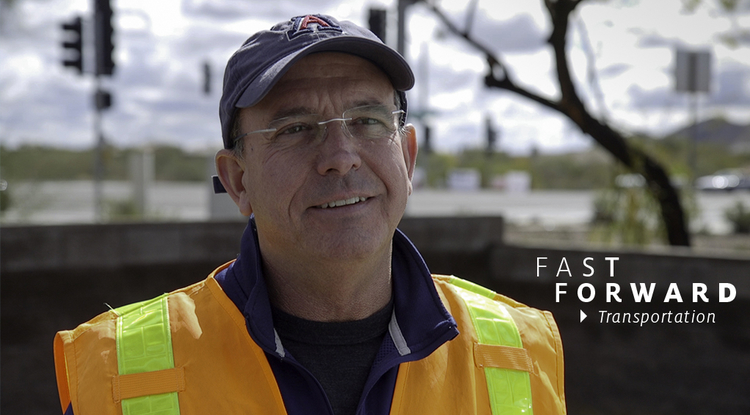 The UA's Larry Head has led the development of infrastructure for vehicle-to-vehicle communication, which is expected to be on U.S. roads in about six years. (Photo: Bob Demers/UANews)

How a UA Engineer Gets Cars to Talk

Larry Head is a pioneer in the field of connected-vehicle technology, and his research is helping to determine how people will move about in the cities of tomorrow.
Doug Carroll
,
University Communications
March 14, 2018
Resources for the Media
Extra Info:

The digital, physical and biological worlds are converging with startling speed, and a future that was unimaginable only a few years ago is already upon us. University of Arizona researchers are at the forefront of this sweeping change, often working across disciplines toward important discoveries. The UANews series Fast Forward has introduced some of the UA's change agents — and shown how their efforts are transforming the way we live.

The faint tremors of a coming earthquake in transportation can be felt, on this cool and cloudy weekday morning in late February, in the nondescript parking lot of a CVS Pharmacy in Anthem, Arizona, a suburb about 30 miles north of central Phoenix.

The presence of a few vehicles from the Regional Emergency Action Coordinating Team, or REACT, a Maricopa County Department of Transportation program, is the only indication to passing motorists that something unusual might be going on. In a few minutes, the specially equipped vehicles will be deployed as part of an exercise in connected-vehicle technology overseen by University of Arizona engineering professor Larry Head, who has been staging such field tests for about eight years — but working on the infrastructure for vehicle-to-vehicle communication, or V2V, for much longer.

So-called "talking cars" aren't a drawing-board thing anymore. V2V technology uses a shortwave portion of the radio spectrum that was made available almost 20 years ago by the Federal Communications Commission. Traffic-safety messages — from traffic signal to vehicle — can be delivered in two-tenths of a millisecond. It's as if a big WiFi router were placed high atop a traffic signal, relaying vital mapping information at lightning speed to your car's laptop computer.

Why does this matter? There are more than 40,000 reasons. The National Safety Council estimates there were that many motor vehicle deaths in 2017 in the U.S. — the second successive year the total has been so high. Such levels had not been seen since 2007.

Head provides an analogy to emphasize what is at stake: V2V technology is as important today as the introduction of seat belts was in the 1950s, he says. It is positioned to revolutionize safety on our streets and roads.

"We have technology that really can save lives, reduce crashes and reduce property-damage costs," says Head, who is also acting dean of the UA College of Engineering. "It's the most exciting groundswell I've seen in transportation in 30 years."

For the Anthem demo, traffic signals at 11 intersections in the city of 25,000 have been fitted with Dedicated Short-Range Communications, or DSRC, radios. Algorithms based on years of research have optimized traffic flow for the intersections. As the UA command vehicle departs the parking lot for a short drive around town, it will encounter REACT vehicles along the route that are posing as fire department, transit and road-crew vehicles.

The technology kicks in, prioritizing vehicles, keeping traffic smooth as well as safe. School zones are accounted for in the mapping, which appears on a monitor inside the command vehicle. Although it isn't put into play on this day, a smartphone application can be used by pedestrians.

Taking the Lab on the Road

Niraj Altekar, a doctoral student who has been working for the past year in Head's lab at the UA, is along for the Anthem ride and will add his observations. Later, refinements will be made to coding and then to simulation via VisSim software.

"The most beautiful thing is coming on the road and seeing how what we're doing (in the lab) is responding," says Altekar, who studied mechanical engineering as an undergraduate. "This is a fascinating field for me."

While most consumer interest has fixated on the development of self-driving (autonomous) vehicles, the complementary technology of V2V has flown mostly under the radar. However, both are integral to the vehicular ecosystem that will radically transform urban life in the next few decades.

Arthur C. Nelson, a professor of urban planning and real-estate development in the UA's College of Architecture, Planning and Landscape Architecture, estimates that by the year 2040 more than 70 percent of all vehicles will be connected autonomous vehicles, or CAVs. He says that the proliferation of these vehicles will increase congestion in suburban areas but reduce traffic in built-up downtowns and other centers.

Research by CBRE Group, a national real-estate consulting group, projects that downtowns will be free of cars — except for CAVs and public transit vehicles operating as CAVs — by 2030.

"There will be a split between the 'haves' who can afford CAVs and the 'have nots' who cannot," Nelson predicts. "The haves will have access to dedicated road lanes, if not entire corridors, while the have nots will need to jostle for space on lanes dedicated to just them, and more often than not will be excluded from access to entire road segments."

It will be a jungle out there, he says, at least as difficult to sort out as it was when horses and the first cars shared the road, more than 100 years ago.

"Urban transportation in 2030 will be much worse than it is now," Nelson says. "It may not be until midcentury that we get this right, if then. Creating a road system that will accommodate the CAV world will be very expensive, and the gas tax alone cannot pay for this. Secondly, current land-use regulations, especially zoning, may undermine our ability to take advantage of CAV opportunities.

"We will need to get both the public financing of transportation and land-use regulations right by 2020 or very shortly thereafter."

Parking will change dramatically, he says, away from surface lots and conventional garages and toward automated "pigeon hole" garages, opening up real estate in the urban core. Mass transit and ride sharing will be different, too.

A seismic shift is on the way, and the look and feel of it could be startling.

"In some areas, there will be more empty than occupied CAVs on the streets," Nelson says.

A proposed federal regulation that would require new vehicles sold in 2023 in the U.S. to have V2V connectivity is under review by the National Highway Traffic Safety Administration. But because the mandate has hit a snag over the emergence of new cellular technology, it may be up to state and local governments to keep V2V moving forward.

In Japan's V2V-favorable climate, Toyota already has sold nearly 100,000 vehicles that have the technology. Hideka Hada, an executive engineer in technical strategy for Toyota Motor North America, has been quoted as saying that infrastructure providers hold the key in the U.S., not the federal government.

Head says that if local governments make the effort to build the infrastructure, it will demonstrate to automakers that their investment in V2V technology will pay off. Both sides want V2V to happen, he says.

Maricopa County, for one, appears to be betting big on connected vehicles as part of its transportation future. In addition to its longtime support of Head's test site in Anthem, the county is poised to launch V2V projects along Highway 85, which is a heavily traveled freight route, and at 50 intersections along the Loop 101 corridor in Scottsdale.

"Traffic signals are a very complex management operation because of all the conflicts (in use) that we have," says Faisal Saleem, who oversees the SMARTDrive Program for the Maricopa County Department of Transportation and has championed Head's research for years. "We are focusing on all modes, including pedestrians, and assigning priority very intelligently. If there's a fire truck, a transit vehicle and a pedestrian, the system knows their position and can assign higher priority.

"If we can save even two seconds for a fire truck or an emergency vehicle that is responding to someone having a heart attack, it can make a difference of life and death."

An effort designed to increase V2V's market penetration — which Head says is essential — is the national SPaT Challenge. The goal of the challenge is to achieve deployment of DSRC infrastructure at 20 signalized intersections in each of the 50 states by early 2020. In addition to Anthem, deployment already is operational in the Western cities of Las Vegas, Salt Lake City and Palo Alto, California, according to the Washington, D.C.-based National Operations Center of Excellence, which offers resources and services to the transportation industry.

Head says he would like to equip 25 percent of Anthem's 10,000 vehicles with V2V, so that "a real impact" could be observed and analyzed.

"When I first got involved (with traffic technology), I thought cars talking to traffic signals would be a cool idea," Head says. "Signals didn't talk to each other in the beginning, and we made them do that. Now cars are talking to signals, and we're able to really do something.

"I love it because we can make a difference in people's lives every day, by making it safer and more efficient for them to drive."