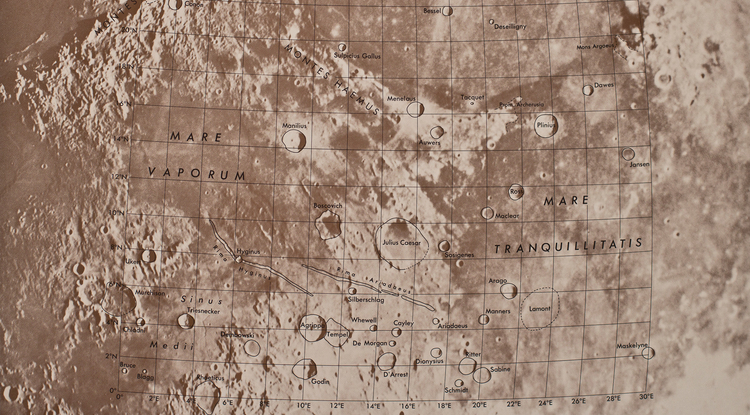 A page from the Rectified Lunar Atlas. (Courtesy of Lunar and Planetary Laboratory)

How the University of Arizona Guided Men to the Moon

The maps and images created by a small University of Arizona team at the start of the space race opened the door for lunar and planetary exploration 50 years ago.
Mikayla Mace
,
University Communications
June 26, 2019
Resources for the Media
Extra Info:

ABOUT THIS SERIES
The University of Arizona played an integral role in NASA’s Apollo missions a half-century ago. Led by Gerard Kuiper, UA scientists and graduate students mapped the moon’s surface with extreme accuracy. The resulting lunar atlases were instrumental in the historic Apollo 11 mission, which landed the first two people on the moon. This series commemorates the 50th anniversary of the Apollo Lunar Module Eagle landing on July 20, 1969.

Related links:
https://uanews.arizona.edu/news/moon
UA Expertise Key in Mapping Moon's Surface
Moon Maps, Lunar Origins and Everything Between
Ion Beams and Atom Smashers: Secrets of Moon Rocks
How the UA Guided Men to the Moon
From Points of Light to Worlds: UA Explores the Solar System
Exploring a Desert Portal to Other Worlds
Mapping the Moon and Worlds Beyond 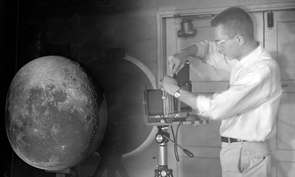 William Hartmann projected photographic plates of the moon onto a white hemisphere to create the Rectified Lunar Atlas. (Courtesy of Lunar and Planetary Laboratory) 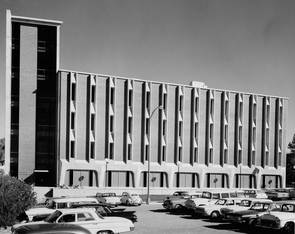 The UA's Space Sciences building was completed in the fall of 1966. (Courtesy of Lunar and Planetary Laboratory) 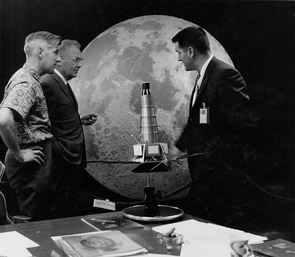 Ewen Whitaker, Gerard Kuiper and Ray Heacock are pictured in front of a Ranger model and lunar hemisphere, which is now located at the Flandrau Science Center and Planetarium at the University of Arizona. A sign in front of half-globe reads "keep yer mitts off" in pseudo-Russian. (Courtesy of Lunar and Planetary Laboratory) 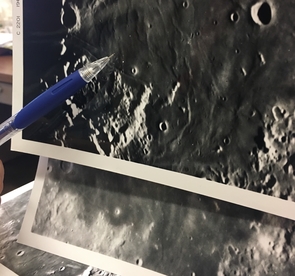 A senior staff scientist who worked for Gerard Kuiper as an undergraduate points to the Apollo 11 landing site on photos from the Consolidated Lunar Atlas. The top photo was taken with the sun at a low angle, which reveals more detail than the bottom photo, which was taken with the sun overhead. (Photo: Mikayla Mace/UANews) 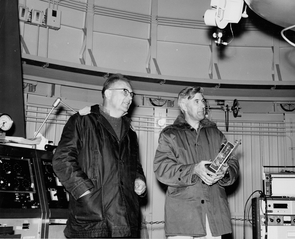 Gerard Kuiper and Ewen Whitaker, holding a 5-inch-by-7-inch lunar camera, are pictured preparing to take photographs of the moon in the dome of the 61-inch Catalina Reflecting Telescope – now called the Kuiper 61-inch Telescope – on Mt. Bigelow in March 1966. (Courtesy of Lunar and Planetary Laboratory) 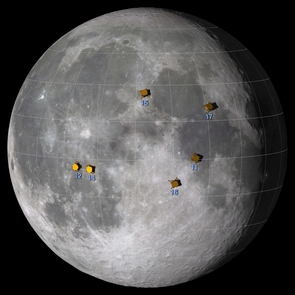 Only a handful people were seriously studying the moon when President John F. Kennedy announced in 1961 that Americans would walk on its surface by the decade’s end. Among them was a small group of researchers at the University of Arizona.

The team imaged and mapped the lunar surface, which allowed them to understand the moon’s geology and NASA to choose landing sites for future robotic and Apollo missions. Gerard Kuiper, the father of modern-day planetary science, led the team and established the Lunar and Planetary Laboratory at the University of Arizona.

“Classic astronomers regarded the moon as an annoyance that lit up the night sky, making it hard to study the faintest stars and galaxies,” said William Hartmann, one of Kuiper’s first graduate students and co-founder of the Planetary Science Institute, or PSI,  in Tucson. Hartmann and PSI co-founder Don Davis, another alumnus, also proposed that the moon was born from a giant impact with the Earth. Their theory still leads thinking today.

“Back then, astronomers were interested only in objects outside our solar system,” Hartmann said. “To most 1950s astronomers, the planets did not seem very interesting, and there weren't very useful techniques for studying them.”

Moreover, moon maps at the time were drawn by hand, and the names of many features remained unsettled.

Kuiper, already a leader in planetary science by the time he arrived in Tucson in 1960, sought to understand Earth’s celestial neighbor and worked for years to create multiple lunar atlases with the best photographs of the moon.

Kuiper and his team collected the best available telescopic photos of the moon from observatories around the world and used them to produce the first two atlases while working at the University of Chicago’s Yerkes Observatory in Wisconsin. The Photographic Lunar Atlas and the Orthographic Atlas of the Moon, which included a coordinate grid, were published in 1960 and 1961, respectively. Astronomers used these while observing the moon telescopically.

The Rectified Lunar Atlas, published in 1963 by the University of Arizona Press, went a step further. The third atlas allowed humans for the first time to see what features on the moon’s edges, called limbs, looked like without distortion.

To accomplish this, Kuiper mounted a 3-foot-wide white hemisphere at the end of a hallway and projected glass plate photographs of the best images of the moon onto it. Hartmann, a first-year graduate student at the time, was tasked with snapping photos of the hemisphere from different angles. The resulting images revealed lunar features as they would appear from the perspective of an astronaut flying overhead.

“The 1967 Consolidated Lunar Atlas was the last in the series of Gerard Kuiper,” said Steve Larson, who was one of Kuiper’s undergraduate research assistants and is now a senior staff scientist at the Lunar and Planetary Laboratory, or LPL. Larson established the Catalina Sky Survey and has worked under every LPL director since the lab’s inception.

The fourth atlas was comprised of the highest resolution images taken from the ground, most of which were taken using the NASA-funded 61-inch telescope perched atop Mount Bigelow in the Catalina Mountains north of Tucson. The telescope is now managed by the university's Steward Observatory and bears Kuiper’s name.

“That was our main project for the first couple years after the construction of the 61-inch telescope,” Larson said. “We were funded by NASA to record high resolution images of the moon, but we also took images of Venus, Mars, Jupiter and Saturn to monitor changes in atmospheres."

Kuiper and his team created the Consolidated Lunar Atlas by carefully focusing the telescope on the moon and systematically snapping thousands of film photos along the moon’s terminator, the boundary between sunlight and darkness. At the terminator, sunlight hits the moon at a low angle, allowing the scientists to capture subtle variations in the lunar topography, Larson said.

But the high contrast and dramatic lighting near the moon’s terminator made imaging the lunar surface features tricky. Larson and undergraduate John Fountain laboriously brightened the areas near shadow and dimmed the brighter parts of the surface by hand.

“It was very analog,” he said. “I spent the whole summer monsoon season down in the basement dark room; The sun was shining when I went down, and when I came out it’s flooding everywhere.”

Kuiper and his team inspected, cataloged and graded each of the more than 8,000 film photos to whittle them down to the more than 200 which now comprise the Consolidated Lunar Atlas. It was published by the Lunar and Planetary Laboratory in 1967.

At the same time, leaders at NASA knew they needed to understand the surface of the moon in detail to choose a landing site. Would the smooth, dark swaths of lunar surface – called maria, which means seas, as the earliest observers thought they were oceans – swallow the astronauts in dust or support them as cooled and solidified oceans of magma?

“When NASA was deciding where to land, they’d be looking at one of these prints. Here’s a spot with not a lot of craters that’s relatively flat,” Larson said as he pointed to the final Apollo 11 landing site, located in the Sea of Tranquility.

There are two main types of terrain on the moon, said LPL professor and planetary science assistant director Shane Byrne.

"Most of the Apollo missions and most of the Surveyor (lander) missions went to one type: the lunar mare, the dark areas of the moon," Byrne said. "It's smoother and safer to land there, and that was the motivation for sending the astronauts there. But most of the moon is covered with the bright areas, the lunar highlands, which are much rougher, much more cratered."

Before Men, There Were Robots

NASA prepared three series of robotic spacecraft to visit the moon ahead of the astronauts: Ranger, Surveyor and Lunar Orbiter.

NASA appointed Kuiper as chief experimenter, a position today referred to as principal investigator, on the Ranger missions. Among the team were Ewen Whitaker, a planetary scientist at the University of Arizona, and Eugene Shoemaker, who created the astrogeology branch of the United States Geological Survey in Flagstaff, Arizona.

Ranger 1 launched August 1961 to collect video of increasing detail before crash-landing on the moon. Future Ranger missions failed until the 1964 launch of Ranger 7, which landed in what Kuiper dubbed Mare Cognitum, the Sea That Has Become Known. Whitaker selected the landing sites for Ranger 6 and 7.

The successful Ranger 7 mission improved the resolution of lunar detail 1,000 times over, Kuiper proclaimed at a press conference shortly after the spacecraft reached the moon.

To analyze the photographs, Kuiper partnered with professors emeritus Robert Strom of LPL and Spence Titley, of the Department of Geosciences. Titley gave Kuiper’s students and NASA’s astronauts crash courses in geology and recommended features the astronauts should photograph from orbit. Titley also worked with the U.S. Geological Survey in 1964 to map the moon using the McMath-Pierce Solar Telescope on Kitt Peak for the Apollo program.

The Ranger missions were followed by Surveyor 1, the first of seven unmanned lunar landers in a program that ran from June 1966 through January 1968. Surveyor 1 reached the surface of the moon on June 2, 1966, and sent back panoramic photos from its travels.

Surveyor’s success reassured the astronauts they would not be swallowed by dust. Despite the success of the Surveyor program, NASA had no way of knowing where, exactly, on the moon the spacecraft landed.

NASA published what they thought was the correct landing site in the journal Science. But Whitaker noticed a discrepancy, and after poring over images taken by NASA Lunar Orbiter, he published an alternate location for Surveyor 1 in the journal’s September issue.

“Whitaker was able to pinpoint the landing area by looking at mountain peaks on the horizon,” Larson said.

Whitaker again proved his prowess of the lunar surface. The first manned mission didn’t hit its intended target because the site was too rocky. The lander carrying the two men cruised for four additional miles, nearly running out of fuel before it touched down. NASA then sought to demonstrate a pinpoint landing with Apollo 12 and used Whitaker’s location of Surveyor 3 to do so. Whitaker’s location was so spot on that the astronauts walked to Surveyor 3.

Since the Apollo missions, the University of Arizona has imaged the surface of Mars in great detail using the High Resolution Imaging Science Experiment aboard the Mars Reconnaissance Orbiter. The university led the team that imaged the surface of Saturn’s moon Titan from under the clouds with the Cassini-Huygens probe, and is heading up the OSIRIS-REx sample-return mission to the asteroid Bennu, where it is currently mapping and imaging the dark surface to choose a collection site.