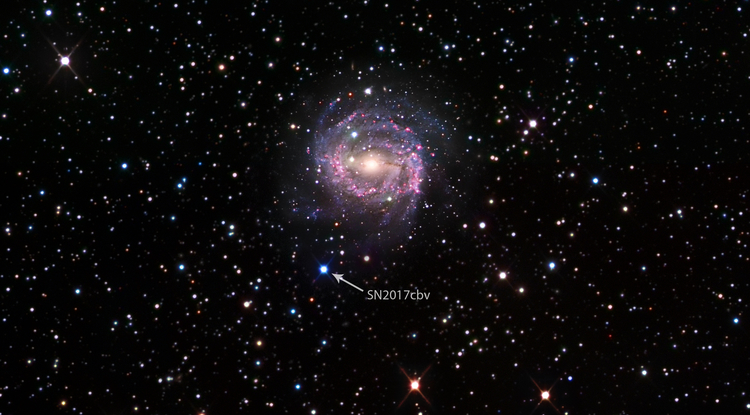 Bright blue dot: Supernovae such as SN 2017cbv appear as "stars that weren't there before," which is why multiple images taken over time are necessary to reveal their true identity. SN 2017cbv lies in the outskirts of a spiral galaxy called NGC 5643 that lies about 55 million light-years away and has about the same diameter as the Milky Way (~100,000 light-years). Data are from the Las Cumbres Observatory Global Supernova Project and the Carnegie-Irvine Galaxy Survey. (Credit: B.J. Fulton/Caltech)

In Hunting Supernovae, 'Get Them While They're Young'

Thanks to a global network of telescopes, astronomers have caught the fleeting explosion of a Type Ia supernova in unprecedented detail. Because this type of supernova is commonly used as a cosmic yardstick, a better understanding of how they form could have implications for future dark energy measurements.
Daniel Stolte
,
University Communications
Aug. 14, 2017
Resources for the Media 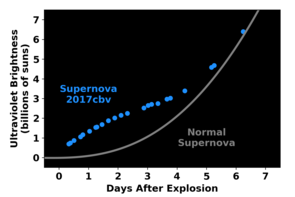 Smoking gun: Unlike "regular" supernovae, whose change in ultraviolet brightness follows the gray curve, this one increased in brightness faster over the first two days, before slowing down (blue curve). This bump in the light curve likely reflects the slamming of material from the exploding white dwarf into a companion star. (Credit: Griffin Hosseinzadeh) 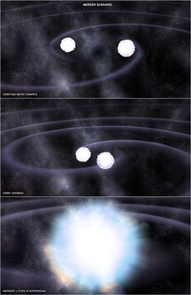 In one of two possible scenarios leading to a Type Ia supernova, two white dwarf stars orbit each other and lose energy via gravitational radiation, eventually resulting in a merger between the two stars. Because the total mass of this merger exceeds the weight limit for a white dwarf, the merged star is unstable and explodes as a Type Ia supernova. (Illustration: NASA/CXC/M.Weiss) 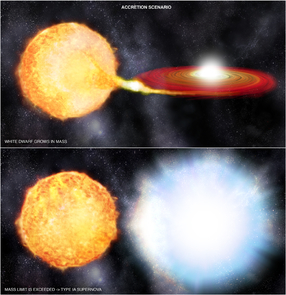 In the second scenario, which is likely the one that triggered the supernova described in this study, gas is being pulled from a sunlike star onto a white dwarf via a red disk. When the amount of material accreted onto the white dwarf causes the weight limit for this star to be exceeded, it explodes as a Type Ia supernova. (Illustration: NASA/CXC/M.Weiss)

Not many people can say they have watched a star explode before their eyes, but David Sand can.

On the evening of March 10, the astronomer happened to be on duty to monitor results coming in from an automated survey scanning faraway galaxies for evidence of such events.  Sand was about to go to bed, when the software algorithm alerted him to a point of light where none had been just a few hours earlier, in a galaxy called NGC 5643, located in the constellation Lupus, 55 million light-years from Earth.

"As I was looking at this image, it was clear to me a supernova had just gone off," said Sand, who joined the University of Arizona's Steward Observatory just this month as a new assistant professor. "I took another image right away to get a confirmation."

Because some blips of light that show up unexpectedly in the observations turn out to be asteroids passing in front of the star-studded background and not stellar cataclysms, Sand sent a remote command to the telescope, located at the Cerro Tololo Observatory in Chile, to snap another image. The blip was still there.

Within minutes of discovery, Sand activated observations with the global network of 18 robotic telescopes of the Las Cumbres Observatory. They are spaced around the globe so that there is always one on the night side of the Earth, ready to conduct astronomical observations. This allowed the team to take immediate and near-continuous observations.

"In a galaxy like our Milky Way, a supernova goes off, on average, about once per century," Sand said. "We were fortunate to see this phenomenon that never had been observed before."

Sand's discovery, designated SN 2017cbv, likely marks the first detailed observation of a cosmic event that astronomers only had glimpses of before: a supernova and its explosive ejecta slamming into a nearby companion star. The discovery was made possible by a specialized survey taking advantage of recent advances in linking telescopes across the globe into a robotic network.

At 55 million light-years, SN 2017cbv was one of the closest supernovae discovered in recent years. It was found by the DLT40 survey, which stands for "Distance Less Than 40 Megaparsecs" or 120 million light-years. The survey uses the PROMPT telescope in Chile, which monitors roughly 500 galaxies nightly.

"This was one of the earliest catches ever — within a day, perhaps even hours, of its explosion," said Sand, who created the DLT40 survey together with Stefano Valenti, an assistant professor at the University of California, Davis. Both were previously postdoctoral researchers at Las Cumbres Observatory, or LCO.

SN 2017cbv is a thermonuclear (Type Ia) supernova, the type astronomers use to measure the acceleration of the expansion of the universe. Type Ia supernovae are known to be the explosions of white dwarfs, the dead cores of what used to be normal stars.

Across the cosmic abyss, a supernova tells of its existence by appearing like a star that wasn't there before. Its brightness peaks within a matter of days to weeks and then slowly fades over weeks or months.

"To turn into a Type Ia supernova, a white dwarf can't be by itself," explained Sand, who serves as the principal investigator of the DLT40 survey. "It has to have some kind of companion, and we are trying to figure out what that companion is."

The identity of this companion has been hotly debated for more than 50 years.

The prevailing theory over the last few years is that the supernovae happen when two white dwarfs spiral in toward each other and merge in a cataclysmic explosion. The other scenario involves a normal star that is not a white dwarf.

Key to the observations reported in this study is a small bump in the light curve emitted by SN 2017cbv within the first three to four days, a feature that would have been missed were it not for the almost instantaneous reaction times that are the hallmark of the DLT40 survey: a fleeting blue glow from the interaction at an unprecedented level of detail, revealing the surprising identity of the mysterious companion star.

"We think what happened here was likely scenario number two," Sand said. "The bump in the light curve could be caused by material from the exploding white dwarf as it slams into the companion star."

"We've been looking for this effect — a supernova crashing into its companion star — since it was predicted in 2010," said Griffin Hosseinzadeh, a doctoral student at the University of California, Santa Barbara, who led the study, which is soon to be published in the Astrophysical Journal Letters. "Hints have been seen before, but this time the evidence is overwhelming. The data are beautiful!

"With Las Cumbres Observatory's ability to monitor the supernova every few hours, we were able to see the full extent of the rise and fall of the blue glow for the first time," he added. "Conventional telescopes would have had only a data point or two and missed it."

Eighteen telescopes, spread over eight sites around the world, form the heart of the Las Cumbres Observatory. At any given moment, it is nighttime somewhere in the network, which ensures that a supernova can be observed without interruption.

Because of their uniform brightness, Type Ia supernovae are akin to a "standard 60-watt lightbulb for cosmology," and scientists use them as yardsticks to measure distances across the universe.

Because of their rare and fleeting appearance, a targeted observational campaign such as the DLT40 survey and an automated network of observatories such as the LCO are critical to the discovery and study of Type Ia supernovae. Funded by the National Science Foundation, the DLT40 survey started in October 2016 and is scheduled to continue over the next three years.

"The secret sauce to this are the connected telescopes of the Las Cumbres Observatory," Sand said, adding that the survey is not about quantity. "We'd rather focus on a precious few than hundreds of them."

It is likely that Type Ia supernovae come from both types of progenitor systems — two white dwarfs or one white dwarf and a "normal" interacting star — and the goal of these studies is to figure out which of the two processes is more common, Sand explained.

"Observing supernovae such as SN 2017cbv is an important step in this direction," he said. "If we get them really young, we can get a better idea of these processes, which hold implications for our understanding of the cosmos, including dark energy."