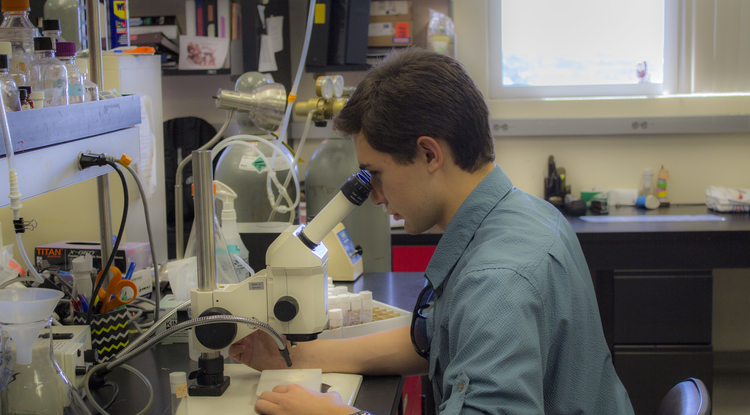 Impatience Is a Virtue for This Innovative UA Freshman

Jeremiah Pate refused to wait until after graduation to found a company, and now he is designing satellites that can explore asteroids and proteins that can battle Parkinson's disease.
Emily Walla
,
NASA Space Grant Intern, University Communications
Oct. 24, 2017
Resources for the Media 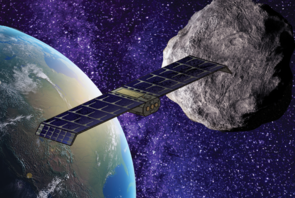 "Impatience is a virtue," says Pate, a biomedical engineering major and founder of a company called Lunasonde. Pate was told to wait until after earning a bachelor's degree to start a company, and told to wait until graduate school to start research on a potential therapy for Parkinson's disease.

"I have the chance now. I can accomplish this now," said Pate, who is in the UA's Honors College.

In August 2016, as a senior in high school in Oro Valley, Arizona, Pate started Lunasonde, which specializes in small, inexpensive satellites. These "picosatellites" can identify deposits of precious metals, natural gas and water beneath the surface of the Earth. Pate hopes to reduce the monetary and environmental cost of mining by giving miners the exact location of resources, allowing for maximum resource extraction while minimizing environmental impact.

Plans call for Lunasonde also to launch small, inexpensive mining craft like the Saberwing that can identify and extract metals from asteroids. Resources that are rare on Earth — such as palladium, a metal used in smartphones — are abundant on asteroids, and Pate's dream is to eliminate scarcity on Earth by prospecting space.

"We have a bunch of designs, but we're still looking for investors," said Pate, who attended the International Astronautical Convention in Australia in late September with that goal in mind.

When he isn't combing the globe for investors or completing his schoolwork, Pate researches gene therapy for Parkinson's disease in the lab of Daniela Zarnescu, professor of Molecular and Cellular Biology and Neurology at the UA. Pate sent research requests to university laboratories from California to Massachusetts, but Zarnescu was the only one who accepted.

Pate competed at ISEF every year in high school, entering projects in physics, embedded systems and photonics, as well as his Parkinson's disease research. The latter earned him the Dudley R. Herschbach Stockholm International Youth Science Seminar award. Although Zarnescu's own research focuses on amytrophic lateral sclerosis — known commonly as ALS, or Lou Gehrig's disease — Parkinson's disease, or PD, and ALS have much in common. Both are synaptic dysfunctions caused by similar protein aggregates.

"I have been interested in expanding our work into PD, and Jeremiah's request provided the excuse to do just that," Zarnescu said.

She was especially excited to have Pate join her lab because his approach to molecular modeling is similar to what Zarnescu uses to study ALS. Pate uses a program he designed and created called Neurogami.

Neurogami models proteins by randomly folding a template until the protein fits the user's specifications. Pate's experimental therapy uses chaperones — proteins that help fold and move other proteins — to fight buildup of alpha-synuclein. Alpha-synuclein is a dopamine-regulating protein found largely in the brain, and it is the main component of Lewy bodies: protein aggregates that form within nerve cells, blocking communication between neurons and causing the symptoms of PD.

Pate first tried using a search algorithm to find an existing protein that would suit his needs. But when he determined the search would take nearly 3,000 years to complete, Neurogami was born.

Out of all of his projects, Pate's research on PD is his favorite.

"It’s been a microcosm of the scientific experience," he said.

In the lab, experiments using fruit flies have supported the results from Pate's award-winning computer simulation. The next step, per the scientific method, is to perform another experiment on fruit flies, this time using a gene vector so the fruit flies create the exact protein formation that Pate wants, instead of using existing fruit fly mutations. Eventually, Pate hopes to test his treatment on humans.

The award Pate earned at ISEF grants him a trip to the Stockholm International Youth Science Seminar, which takes place during the Nobel Prize celebrations in December. At the seminar, he will meet Nobel nominees and laureates.

"Nobody aspires to be a Nobel laureate," Pate said. "They aspire to do significant work."

Pate aspires to eliminate Parkinson's disease through bioengineering. With Lunasonde, he seeks to raise humanity's standard of living through space prospecting. The fields are vastly different, but Pate has a reason for his pursuit of dissimilar interests.

"You can't spend your whole life going deeper in (only) one area and expect to find something new," he said.

Beginning with his research at the UA, Pate has made himself a pioneer, with a broad horizon and a lifetime of discovery ahead of him.