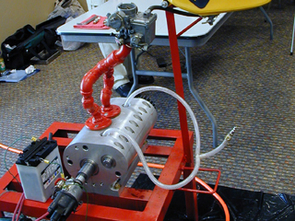 A team of mechanical engineering seniors designed and built this prototype engine in only eight months on a shoestring budget. The students received valuable support from Raytheon, the University Research Instrumentation Center and UA's Aerospace and Mechanical Engineering Department. (Photo by Susie Bowers) 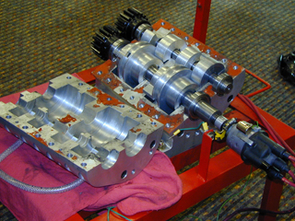 The Jonova Motor has only two rotating parts. By contrast, the internal combustion engines found in most automobiles have something like 96 moving parts. (Photo by Susie Bowers)

Five mechanical engineering undergrads have designed and built an engine that combines some of the best features found in internal-combustion (IC) and rotary designs.

It has just four parts, only two of which rotate, and promises to be an exceptionally reliable, efficient, smooth-running design. By contrast, the IC engines used in most automobiles have something like 96 moving parts.

The new Jonova Motor uses a rotary compression system much like that found in Mazda's Wankel engines. But its rotors travel in a circular path, unlike the Wankel rotor, and are attached to a drive shaft. In essence, the rotors replace the pistons, connecting rods and valves found in IC engines. Unlike pistons, which have a jerky, constantly changing vertical motion, the Jonova rotors spin smoothly in one direction.

"Even at 600 rpm, there is no shaking," says Russell Mitchell, one of the five mechanical engineering seniors who designed the motor. "If you run an internal combustion engine at 600 rpm, that's a low idle and it's not smooth at all."

Team member Josh Ludeke notes that the Jonova Motor, like all rotary engines, will spin much faster than an IC engine, allowing it to produce more power from a given amount of fuel. Rotary engines can spin at 15,000 rpm, well beyond the 4,000 to 5,000 rpm of stock IC engines and even much faster than the 9,000 rpm racing engines used by NASCAR. "You can get a lot of power out of a tiny engine this way," he says.

Unlike other rotary designs, which often have a compression stroke that covers only 70 degrees, the Jonova Motor stroke is 270 degrees, allowing it to produce more power. It's also simpler than other rotaries. "We just unbolt the top and take out the shafts," Ludeke says. "It's extremely simple."

The engine's compression ratio also is variable, depending on the angle between its two rotor arms, Mitchell explains. So the same engine could be used for everything from a farm tractor to a racecar, depending on how it is set up.

The students' prototype is similar to a two-cylinder IC engine. Several of these two-rotor blocks could be linked together to produce a 6-, 8- or 12-rotor design.

"We looked through the literature as much as we could with the time we had, but we couldn't find anything like this engine," says team member Keith Brewer.

In addition to Mitchell, Ludeke and Brewer, mechanical engineering seniors Fahad Al-Maskeri and Jumaa Al-Maskeri also were part of the team.

The engine was designed and built in just eight months on a shoestring budget. Normally, a project like this might require two years and a $50,000 budget. The initial impetus for the project came from Nowakowski's grandson, who was a student at UA and approached Associate Professor Al Ortega about constructing a working model of the engine based on his grandfather's patent.

"It takes a special team of students to pull off a project of this magnitude," says Ortega, the students' advisor in Aerospace and Mechanical Engineering's (AME) senior design course. "This team was successful because of the mix of talent, where each team member contributed ideas and skills that no one person would have alone."

But the project required more than talent. "The contributions of the AME department, the University Research Instrumentation Center (URIC) and Raytheon were absolutely critical to success," Ortega says.

The AME department contributed funds and faculty expertise. Raytheon used its rapid prototyping equipment to produce a nylon proof-of-concept motor that could run on compressed air. And URIC machined the prototype from aluminum and steel, contributing materials and labor worth about $7,000.

"The students spent a lot of time with Russell," says Robert Kingsley, URIC director. In the process, they gained an insight into fabrication methods and the process of translating a design into hardware. For instance, Cole showed the students how to divide their design into subassemblies that could be machined more easily.

"We were really pleased with these young men and the job they did," Kingsley adds. "If we continue to produce engineers like these guys, our country won't have any problem competing in technology."

Unfortunately, the students didn't have the money to fabricate steel combustion-chamber liners. As a result, the engine isn't capable of running for a long period because the melting point of aluminum is only about 600 degrees above the spark temperature. They also didn't have time to build a carburetor for the engine and used one from a Volkswagen beetle that is too large for their 400-cubic-centimeter displacement.

As a result, the motor has not run for more than a few seconds so far. "We took the intake off and sprayed some ether in and it really started sparking, but the carburetor is supplying too much fuel," Ludeke explains.

Ortega says the Jonova Motor project will continue with another student team in the 2003-2004 senior design class. The second version will build on the foundation laid by last year's team and will include things that were not possible in the first prototype. Currently, the AME department is seeking sponsors for the 2003-2004 team.

For last year's team, "it was exciting for them to see their concept become a reality," Ortega says.

Mitchell agrees. "To see it going from an idea to an electronic file -- that was really neat. Especially when we got the animation together and could see it run. We were pretty excited. And then once we actually saw it come together in metal -- that was a phenomenal feeling. That's the ultimate high for an engineer."