'Insecta' Explores Insects and the People Who Study Them 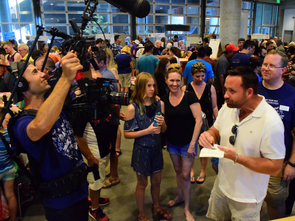 For six months, researchers and a camera crew from the University of Arizona have been exploring a hidden world, but they didn't need off-road vehicles or mountaineering ropes to get there.

The world of insects surrounds us every day, although for most of us it remains invisible. A new documentary, "Insecta: Science That Stings," is changing that as it journeys deep into the lives of three entomologists and the insects they study.

Justin Schmidt, the "King of Sting" and a scientist in entomology, has spent his life in relentless pursuit of stinging insects. He has been stung thousands of times by all manner of creepy crawlies, leading him to develop the Schmidt Sting Pain Index, which Schmidt immortalized in the popular book "The Sting of the Wild" and touted on late-night TV talk shows such as "Jimmy Kimmel Live!" A red fire ant's sting, the lowest on the index, is "sharp, sudden, mildly alarming ... like walking across a shag carpet and reaching for the light switch." A tarantula hawk's sting ranks among the highest, creating pain that is "blinding, fierce, shockingly electric" — and was caught on film for "Insecta."

"When I started producing this film about insects, I never could have imagined that it would have a love story, but it has two — one between human scientists and the other is their passion for insects," said the project's producer, Cody Sheehy, who works in communications and cyber technologies for the UA College of Agriculture and Life Sciences.

Sheehy was referring to Wendy Moore, associate professor in entomology, whose "once-in-a-lifetime" romance in the South Pacific brought her to entomology, where she found her second love, bombardier beetles. These cute, often colorful beetles may be shy, but they have a secret weapon. When threatened, bombardier beetles use a mixture of hydrogen peroxide, hydroquinones and a catalyst to kick off an explosion they can spray on would-be attackers.

Cara Gibson, co-producer of "Insecta" and also an entomologist and assistant professor of practice at the UA, has focused her abundant energy on introducing as many people as possible to the wonder of insects. She transforms the lives of thousands of children every year through her position as director of the Arizona Insect Festival, the largest event of its kind in the Southwest.

To reach beyond the eager minds of children, though, she knew she needed a different approach. That's when she reached out to Sheehy and the film team, started raising money for the film and agreed to tell her story on camera.

"People who appreciate insects will definitely enjoy this film," Sheehy said, "but Cara and I set out to connect with all the people out there who are terrified or disgusted by insects. We meet them where they are and take them on a journey that ends in the wonder of science and exploration. This film is for them."

"During this project," Gibson said, "it was fun to watch Cody become intimately familiar with how extremely valuable insects are to humans in ways that most people don't often realize. They are important in their pollination of the food crops we eat; they help with the decomposition of waste; and they are an important level of the food chain that supports all of the other parts of nature that we rely on."

That message is especially timely, as a growing body of research is illuminating how many insects are disappearing. Mainstream media have picked up on what is happening to pollinating bees, a phenomenon known as colony collapse disorder, because of its serious consequences on horticultural crop production. Also covered but less often is a steep drop in insect and invertebrate populations around the world.

In a 2014 Science article, Stanford University's Rodolfo Dirzo combined data from several studies and found a 45 percent decline for a wide range of studied populations in the last 40 years. Many factors have contributed to the die-off, but researchers cite the largest causes as pesticide use, monoculture crop plantings and urban sprawl coupled with rampant habitat destruction.

"Insecta" already has started attracting attention. Mark Laivins, CEO of Wilderness Productions, said, "Working with Justin and the 'Insecta' team was an absolute blast. The video they produced is not only first rate, but also does a great job exposing the worldwide fascination with insects."

Many will be fascinated by what they find if they look more closely at these "mini-monsters."

"Insects are the last animals you interact with on a daily basis without choosing to," Gibson said. "What usually remains hidden to most people is that insects are not only critical to Earth's functioning, but they have a sublime beauty as well."