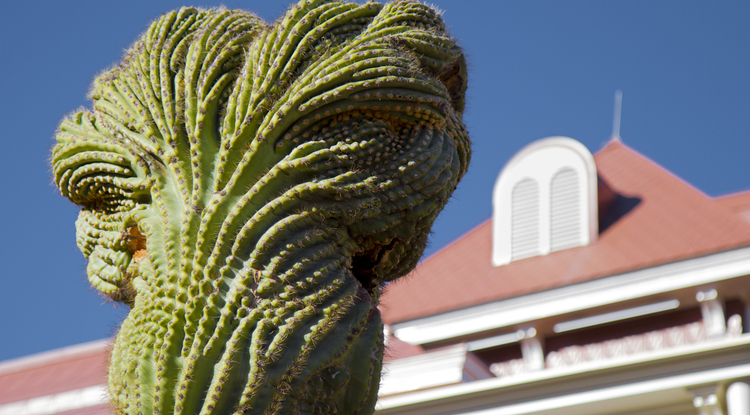 Little is known about the morphology of the crested saguaro, although some suspect its fan shape is the result of a genetic mutation, freeze damage or a lightning strike. (Photo: Bob Demers/UANews)

Inside the 'Turtles of the Plant World'

The saguaro, an iconic symbol of the Southwest, is receiving more attention than ever from UA researchers wanting to know about its evolution — and from admirers interested in preservation.
Robin Tricoles
,
University Relations - Communications
Feb. 24, 2016
Resources for the Media
Extra Info:

Parking is available on the street and at the Pennington Street Garage. Refreshments will be provided. RSVP by sending an email to Diana Rhoades, NPS Urban Fellow. 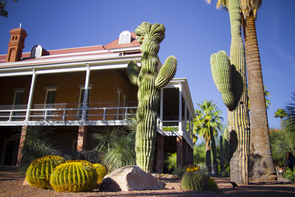 The crested saguaro on the northeast side of Old Main replaced one that was considered a UA campus icon. (Photo: Bob Demers/UANews) 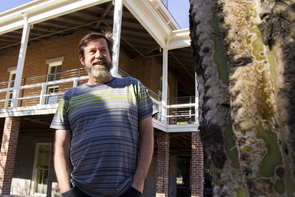 UA professor Frans Tax, who studies the saguaro’s biology and morphology, says plants "have an innate immunity as we do, and they recognize some of the same things we do, like bacteria." (Photo: Bob Demers/UANews)

A few miles southeast of Tucson’s Tumamoc Hill, four men gather near a lone saguaro. All are dressed in work boots, dungarees and hats.

Hands in gloves, one wraps the man-size succulent in a carpet remnant and secures it with wire. Another begins digging around the plant’s base, quickly displacing the gravelly, khaki-colored soil that successfully supports the limbless saguaro despite its startlingly shallow root system.

Depending on whom you ask, saguaros weigh 60 to 100 pounds per foot. That means a 20-foot-tall saguaro can come to 1 ton.

An iconic symbol of the Southwest, the beloved cactus is now receiving more attention than ever from researchers wanting to know about its evolution and from admirers wanting to protect and preserve it.

Richard Wiedhopf, president of the Tucson Cactus and Succulent Society, says the society got its start back in the late 1990s when building development was at its peak.

"They (developers) would come in and blade an area before they started building, and all the cactus and native plants were piled up for mulch," Wiedhopf says. "So a number of us had the idea that by getting tags and permits from the state, we could come out and save these plants.”

And that’s what they did. Since 1999, the society has rescued about 76,500 succulent plants and completed nearly 370 rescue missions. New homes are found for the plants, which also are sold to the public throughout the year.

Wiedhopf also serves as an assistant dean for finance and facilities at the University of Arizona, where scientists are learning more about saguaros’ unique traits and evolutionary history. As it happens, saguaros share a rich past with the UA, notably with the University’s Tumamoc Hill. An event on Tuesday evening in downtown Tucson will celebrate saguaro science and the 100th birthday of the National Park Service, which operates Saguaro National Park.

In October 1903, under the direction of the Carnegie Institution of Washington, D.C., Tumamoc became home to the UA's Desert Botanical Laboratory. Researchers there began paying close attention to the area’s thousands of saguaros, taking note of their population size and growth rate.

Now Mike Sanderson is paying close attention to the cactus. Sanderson, a UA professor of ecology and evolutionary biology and a member of the BIO5 Institute, studies the history of life on Earth, mainly plants, using genomics and high-performance computing.

"We thought Tumamoc would be a great place to get a reference plant," Sanderson says. "We thought there was a certain historical resonance to collecting samples there."

Recently, Sanderson and his colleagues took a sample of epidermis and underlying tissue, 2 centimeters by 10 centimeters, from each of two saguaro specimens, Carnegiea gigantea, located near the laboratory’s research building.

Much of Sanderson’s research focuses on the evolutionary relationships, the variation among and within all sorts of plant species. He says that he and his colleagues hope to learn about variation in saguaros in Arizona and Mexico.

"You want to know how you get from these related plants that look like normal plants to these really highly different kind of plants," Sanderson says.

So far, Sanderson and others from the UA, the Universidad Nacional Autónoma de México and Arizona State University have secured samples from eight different populations of saguaros collected across Mexico and Arizona, including the samples gleaned from the saguaros residing on Tumamoc Hill.

"Plants’ chloroplast genome, which is quite small compared with the nuclear genome, is very important because it codes for proteins important for photosynthesis," Sanderson says.

No matter, what we see as charismatic about saguaros is their genomic side, Sanderson says.

"Its genome is very much on its own branch of the evolutionary tree," he says. "Saguaros have features that are unique: succulent stems, the way the spines are clustered in these areoles, their giant treelike forms. But everyone knows a cactus when they see one, in that they are like the turtles of the plant world."

Plants Have an 'Innate Immunity'

Although genetic sequencing is a powerful tool to explore plants’ evolution, sequencing alone doesn’t replace analysis of the cactus’ biology, specifically its physiology, biochemistry and morphology.

Frans Tax, professor of molecular and cellular biology in the UA College of Science and a member of the BIO5 Institute, is particularly interested in the saguaro’s biology and morphology.

"The saguaro is such a classic plant of the Sonoran Desert, but it also has some interesting biology," Tax says. "It’s a long-lived plant. Saguaros are around 75 or 80 when they branch and around 100 when they flower. I’m interested in looking at the genes that are involved in their unique development and in the saguaros’ defense genes.

"Plants have an innate immunity as we do, and they recognize some of the same things we do, like bacteria."

Tax also is interested in crested saguaros, or fasciated ones, characterized by misshapen growing tips, some that take on a fan shape. Some suspect that crested saguaros’ physical eccentricity results from a genetic mutation, freeze damage or a lightning strike, but no one knows for sure what is behind their odd morphology. What’s more, little scientific literature exists on the subject.

For now, Tax suspects that proteins secreted within the cacti may be behind some sort of uncontrolled cell division and growth.

Researchers aren’t the only ones intrigued by crested saguaros. The public is, too.

In fact, the UA is home to 100 saguaros, perhaps more, and one of those is a crested individual, a relatively recent arrival to campus that resides on the northeast side of Old Main. It replaces one believed to have been lost to disease.

"The old crested saguaro was an icon on campus," says Tanya Quist, director of the UA Campus Arboretum. "It was designated as a heritage tree because it was here for so long and was such a beautiful, interesting specimen.

"We lost something that was a really important part of our heritage. I was really sad about it, but I was surprised about how many people had come from out of town to visit it, and how people who were on campus would contact me and ask, 'Where’s the crested saguaro?'"

Working with the U.S. Department of Agriculture and the Campus Arboretum advisory board, the UA was able to secure another crested saguaro.

Campus Arboretum advisory board member Juan Barba "was miraculously able to find options for us," Quist says. "You can’t buy a crestate. Instead, you pay for all the permits, salvage, transport and installation. And this one has this beautiful undulating trunk. This specimen is spectacular."