In a case of rapid evolution, bacteria have been found to give whiteflies – crop-damaging insects of global importance – an edge over their uninfected peers, new research from the UA suggests.
Daniel Stolte
,
University Communications
April 7, 2011
Resources for the Media 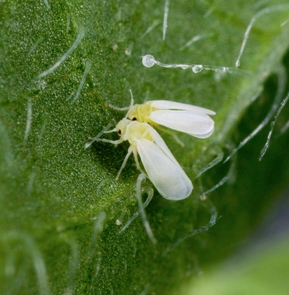 Sweet potato whiteflies are often seen in pairs, like these two on a plant leaf. UA researchers discovered that Rickettsia bacteria give the tiny pests an evolutionary edge over their non-infected peers. (Photo: Stephen Ausmus)

In just six years, bacteria in the genus Rickettsia spread through a population of the sweet potato whitefly (Bemisia tabaci), an invasive pest of global importance. Infected insects lay more eggs, develop faster and are more likely to survive to adulthood compared to their uninfected peers.

The discoveries were made by a University of Arizona-led team of scientists and are published in the April 8 issue of the journal Science.

"It's instant evolution," said Molly Hunter, a professor of entomology in the UA's College of Agriculture and Life Sciences and the study's principal investigator. "Our lab studies suggest that these bacteria can transform an insect population over a very short time."

"It is not uncommon to find a microbe providing some benefits to their hosts, but the magnitude of fitness benefits we found is unusual," she added.

In addition to the observed evolutionary advantages – which biologists call fitness benefits – Hunter's team discovered that the bacteria manipulate the sex ratio of the whiteflies' offspring by causing more females to be born than males.

According to Hunter, the bacteria are transmitted only through the maternal lineage (from mother to offspring). Therefore, it is beneficial for them to make sure more female than male whiteflies are born.

"However, we don't know how they're doing that yet," she said.

Anna Himler, a postdoctoral research associate in Hunter's lab and the lead author on the research paper, said her team was most surprised by the speed with which the bacteria moved through the whitefly population.

Whiteflies come in many different species and variants within species called biotypes. Of those, none are considered as detrimental to agriculture as the "B Biotype" of the sweet potato whitefly, which originated in the Mediterranean.

Contrary to what their name implies, whiteflies belong to an order of insects known as Hemiptera and are related to aphids and true bugs. Like their kin, they puncture their host plants and suck out the sugary sap. In addition to stripping the plant of nutrients, larvae and adults produce copious amounts of honeydew, which attracts mold and leads to damage of the leaves. Finally, whiteflies transmit plant viruses; in the case of the sweet potato whitefly, more than a hundred different kinds.

Compared to the vast majority of whiteflies, which are highly specialized and feed only on particular host plants, the sweet potato whitefly feeds on more than 600 host plants, which means it can move from one plant to another through the seasons.

"Here in Arizona, it probably starts out on weeds in the spring, and then moves on to melons, and when melons are done, it moves in big numbers onto cotton and feeds on that all summer long," Hunter explained. "In the fall, it moves on to vegetables, and so it just keeps going."

What whiteflies lack in body size – they are about one-sixteenth of an inch long – they make up for in numbers. Whiteflies can colonize a host plant in large numbers and blanket leaves with larvae and sticky honeydew in a short time."

"In the late 1980s and early 1990s, when this new biotype arrived in the Southwest, the population just exploded," Hunter said. "Sometimes you could see clouds of whiteflies in the air, gumming up windshields. With integrated pest management practices, many developed by colleagues here at the UA, their impact has decreased tremendously, but they still are the worst pest in Arizona's cotton industry. If it wasn't for whiteflies, farmers would be spraying cotton a lot less."

The team is now trying to explain how Rickettsia increases whitefly fitness. In one conceivable scenario, the bacteria might turn down the plant defenses in an effort to make it easier for the whitefly to feed on the plant.

Himler said that because studies done elsewhere suggested fitness differences were not important, her team initially believed that in order for the microbes to spread so rapidly through the population, the whiteflies must pass them on through horizontal transfer (from individual to individual) rather than through vertical transfer (from mother to offspring).

"So we did this big horizontal transmission experiment but found almost nothing. At the same time, we saw these incredible differences between the Rickettsia-positive and Rickettsia-negative whitefly cultures. In evolution, fitness is the money. So I just saved a couple of leaves from my plants from the horizontal transmission experiment and thought, let's look at the offspring. Even though I only had a few leaves, the effect was strong. We found many more offspring coming from the Rickettsia-positive plants than from the control plants."

"Rickettsia-infected whiteflies lay more eggs, more of those eggs survive, and there is the reproductive manipulation toward producing more female than male offspring. These effects are not unheard of, but the strength that we found here is unusual."

According to Hunter, the interaction between host and bacteria is a tug-of-war between a positive and negative effect.

"In general, taking the sex ratio control away from the host is not a good thing for the host," she said. There is a reason why most living organisms have roughly equal proportions of sexes. If there were more females, then any individual producing more males would produce more progeny. This is one of the reasons a one-to-one sex ratio is really common in nature."

The team believes that discovering how profoundly and how fast microbes can change a population of a pest of global importance has implications for pest management strategies.

"It would be interesting to see if by having a microbe that has this big effect in one direction, if you could make it so that it has an effect in the other direction, to help control the pest," Hunter said. "Could we use symbionts in a way to make things less of a problem, to manage pest populations in a more sustainable way?"