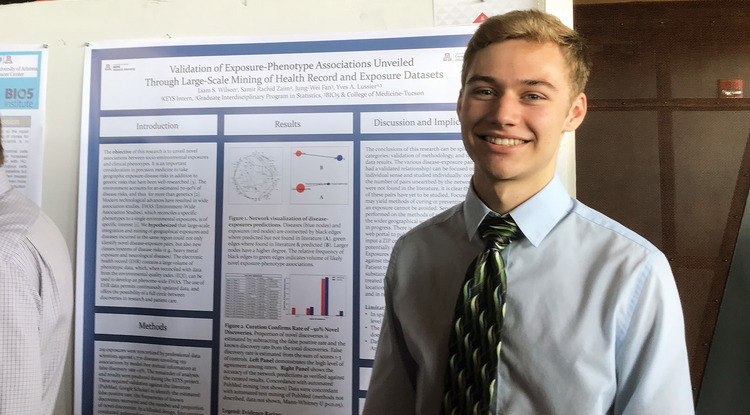 Liam Wilson, a student at Westwood High School in Mesa, Arizona, contributed to a UA research study last summer as part of a KEYS Research Internship. He and his fellow KEYS interns were named co-authors on the resulting paper. (Photo: Colleen Kenost)

Summer internships in a UA bioinformatics laboratory led to the realization of a prestigious scientific goal for three local students.
Tatiana Tomich
,
UA BIO5 Institute
Nov. 13, 2018
Resources for the Media 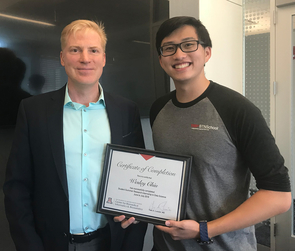 Authoring a manuscript resulting from novel research can be the accomplishment of a scientist's career, and students cited as co-authors are typically graduate students or post-doctoral researchers. Being cited as an author on a scientific paper before graduating high school is virtually unheard of; however, thanks to a unique internship opportunity, three students in a University of Arizona BIO5 Institute laboratory will leave high school as published scientific authors.

Liam Wilson, Wesley Chiu and Minsu Pumarejo each completed summer data science internships in Dr. Yves Lussier’s bioinformatics lab and the Center for Biomedical Informatics and Biostatistics. These were not ordinary internships, though. Within 48 hours on the job, the students were being mentored on how to analyze the results of medical studies, curate information through extensive literature reviews and cross-reference their findings.

They were then put to work validating the findings of a bioinformatics study led by Lussier, director of the Center for Biomedical Informatics and Biostatistics and associate director of informatics at the BIO5 Institute. The study was the culmination of a four-year computational biology project that analyzed "junk DNA," the area of the DNA that does not code for proteins, and disease comorbitities, where one or more additional diseases occurs alongside the primarily diagnosed disease.

While junk DNA accounts for about 97 percent of the human genome, little is understand about these regions and there have been no previous wide-scale, comorbidity curation studies. UA researchers were driven by the hypothesis that analyzing these shared molecular mechanisms between diseases would provide previously unknown comorbidity links, and they were right. Among the approximately 16,000 potential combinations, 398 new links were found.

Lussier, who is also a professor of medicine and associate vice president in UA Health Sciences, collaborated with Haiquan Li, assistant professor of biosystems informatics in the UA College of Agriculture and Life Sciences' Department of Agricultural & Biosystems Engineering, on the study.

The students' validations were based on collecting data from existing research studies and analyzing anecdotal evidence from physicians. Li, who has been working on research projects of this nature for 10 years, said he was surprised by the capabilities of the high school interns.

"They had never been exposed to medical studies," Li said. "They had to be trained rapidly and had a tight deadline – three weeks."

Despite the challenges, the interns rose to the occasion, completing computational analysis usually only conducted by experienced informaticians, Li said.

Wilson, from Westwood High School in Mesa, Arizona, was part of the KEYS Research Internship program, a seven-week opportunity for Arizona high school students to work in BIO5 Institute labs alongside top faculty like Li and Lussier. Wilson said he feels lucky to have been placed in this bioinformatics lab.

“Dr. Lussier is an absolutely brilliant person,” Wilson said. “Being around someone with such a brilliant mind leaves you awestruck and is very inspiring.”

Lussier has mentored or co-mentored 22 Ph.D. candidates and 21 post-doctoral fellows, two of which are leaders in biomedical informatics at their new institutions. For the KEYS program, he  mapped out a project that would give the interns a chance to make a meaningful contribution to his research, and he took time to personally train each of the high school students when they started in his lab.

Wilson said that this opportunity has swayed him toward pursuing a degree in computer science at the UA, though he has the grades to get into virtually any university of his choosing. For Wilson, the appeal of the UA lies in the possibility that he could continue to work as an undergrad under Lussier, which is something that many previous KEYS interns have done in their respective labs.

"The sense of community is very nice. I have definitely felt lost, but there's always been someone there to help us understand," Wilson said. "Even in our downtime, we are conversing and progressing our knowledge."

Chiu, a senior at Basis Tucson North, is also keen on continuing his work with Lussier. Chiu says that while he has always been interested in biology, it wasn’t until his internship that he began to understand how what he was learning in the classroom could translate to what he wanted to do after graduation.

“I’ve learned more about databases, querying and their connection to real-world application,” Chiu said. “We have done a lot of programming in class, but this has really opened my eyes to the possibility of integrating programming to solving problems affecting humanity right now.”

Lussier and Li's work in this study is aimed at tackling large-scale health problems, as identifying new comorbid diseases can aid doctors in implementing prevention and treatment plans and inform drug discovery efforts. With 42 percent of patients currently experiencing disease comorbidity, the contribution of knowledge from this study has the potential to not only reduce healthcare costs, but also decrease mortality rates for patients.