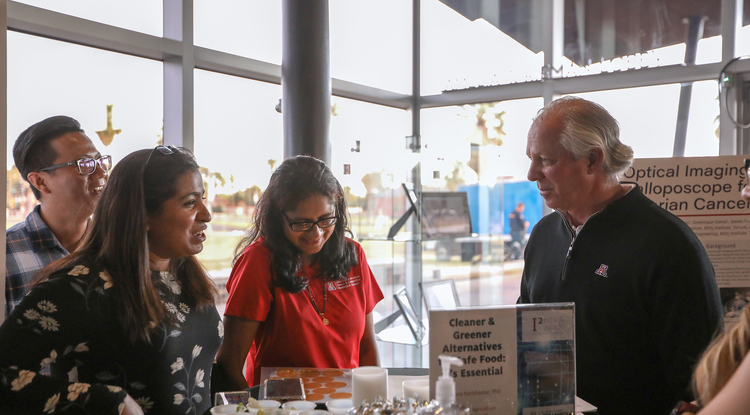 At its sixth annual I-Squared Awards and Expo, Tech Launch Arizona recognized the greatest contributors to the local ecosystem of invention and commercialization from both inside and outside the university.
Paul Tumarkin
,
Tech Launch Arizona
April 4, 2019
Resources for the Media 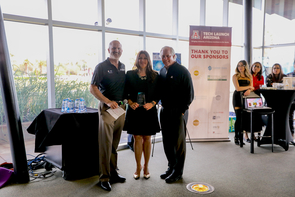 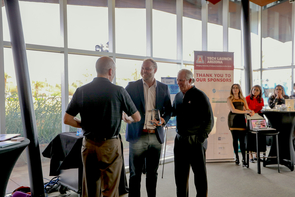 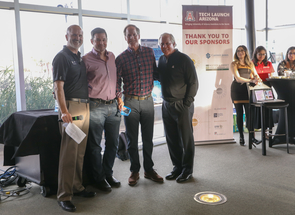 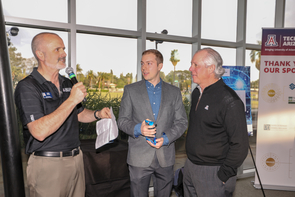 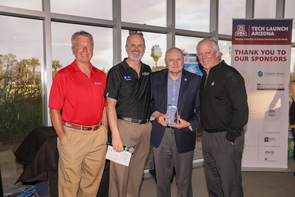 On April 1, Tech Launch Arizona, the office of the University of Arizona that commercializes inventions stemming from research, hosted its sixth annual I-Squared Awards and Expo event. Along with honoring the top inventors and entrepreneurs dedicated to commercializing the UA's inventions, the evening included a series of tables where entrepreneurial researchers from across the UA presented their inventions and startups.

UA President Robert C. Robbins was on hand to welcome attendees and comment on the importance of research, invention and commercialization in the context of the university's new strategic plan.

“Tech Launch Arizona is a vital part of realizing our vision for the University of Arizona as a world leader in the Fourth Industrial Revolution,” Robbins said. “In order to ensure the incredible work of our researchers reaches as many people as possible around the world, translation and commercialization are key. I am proud to help recognize the extraordinary talent we have here in our community with the I-Squared Awards.”

This year, TLA honored individuals from across the UA and Tucson, and introduced a new award, Student Innovator of the Year.

"We couldn't fulfill our mission of creating impact without everyone's contributions," Hockstad said. "From researchers bringing us their raw inventions and ideas to the entrepreneurs and investors who help us move these innovations toward being strong companies and products, our success depends upon all of you. We thank you all for being a part of this work of making a better world."

Hockstad and Robbins presented the awards to the 2019 honorees:

Inventor of the Year: Louise Hecker

The Inventor of the Year is a UA investigator who has exhibited exemplary research and innovation, and has been an excellent collaborator with TLA to create a path to commercialization. Hecker, an associate professor in the UA Division of Pulmonary, Allergy, Critical Care and Sleep Medicine in the UA College of Medicine – Tucson, and others in her lab invented the first highly selective Nox4 small molecule inhibitors for the treatment of fibrotic disorders. These disorders are typically chronic and can often be fatal. Overall, 45 percent of deaths across the U.S. each year are associated with fibrotic disorders. Hecker, a member of the UA BIO5 Institute, and her team have launched a startup, Fibronox, to develop the invention and bring it to the world.

Startup of the Year: Urbix Resources

TLA selected a startup that has demonstrated recent success and impact. Urbix Resources was founded to commercialize a portfolio of lithium-ion battery and related material technologies. Palash Gangopadhyay, chief technology officer of the company, was an adjunct research professor at the College of Optical Sciences when he developed the inventions. The company was co-founded by Gangopadhyay along with UA alumni Adam Small and Nicholas Cuevas. This March, Urbix was given the Phoenix Chamber of Commerce award for Exceptional Innovator of the Year. The group is currently building a green tech purification plant with an expected $200 million annual revenue, and has raised approximately $5 million to date.

Each year, TLA recognizes a partner that supports UA commercialization efforts. Horner and Gunn serve, respectively, as chairman of the screening panel and chairman of the Desert Angels. The Desert Angels is one of the country's leading angel investor groups with over 80 members, many of whom have invested in a significant portfolio of UA companies. The Tucson-based private investment group has been a great supporter of the TLA mission and an active player in helping UA startups achieve success.

Students are critical members of the innovation ecosystem, often serving as inventors alongside faculty and helping with the commercialization of UA inventions. This year marks the first time TLA is recognizing a student innovator. Baker took his own invention – a way to put nanoparticles in glass – through the TLA I-Corps program. TLA also chose to invest asset development funds in his project. Baker is pursuing a doctorate in optical sciences and has served as a TLA technology student fellow, where he contributes to the business intelligence team by helping generate product market research reports for new inventions. He is also a graduate research and development intern at NP Photonics, a company started by optical sciences professor Nasser Peyghambarian.

The DNA Award for Leadership and Vision was created last year to honor those who have dedicated their efforts to improving the innovation ecosystem in Tucson. During his time at the University of Arizona, Wyant made contributions to research and teaching in optical sciences and electrical and computer engineering, and served as the founding dean of the College of Optical Sciences. The college was created as a place to apply optical technologies to real-world problems, and based on his leadership, continues to be the most active college at the UA in terms of its research relationships with industry. During his career, Wyant co-founded local optics companies WYKO Corp. and 4D Technology Corp. This year, Wyant made a $20 million gift to the college to support 10 new faculty positions, representing the largest gift for endowed faculty chair positions in UA history. In his honor, the college is being renamed the James C. Wyant College of Optical Sciences. Wyant, who retired in 2013, is the first recipient of this award following its namesake recipient last year.

A Showcase of UA Inventions

The event's showcase included an interactive expo where entrepreneurial faculty displayed their startups and inventions from across the University:

"Every day, the UA community is learning, researching and inventing solutions to the greatest challenges facing our world," Hockstad said. "We're honored to be the ones to help bring those inventions to the world and look forward to continuing to grow the culture of innovation not just at the UA, but throughout the ecosystem."