It's Good to Be A Guy on Wall Street 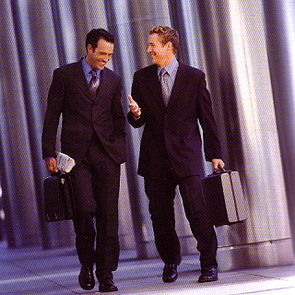 Wall Street is still a man's world, especially when it comes to executive compensation. A study by a sociologist at the University of Arizona indicates that, in the elite, male-dominated world of securities traders, women earn less than men, even when working at nearly identical jobs. What's more, the wage penalty for being a woman in this line of work is substantial, compared even to other male-dominated industries, such as engineering.

In the current (December 2003) issue of the sociology journal, Social Forces, Louise Marie Roth reports that her data on earnings "suggests that some form of residual discrimination shapes earnings disparities among comparable individuals on Wall Street."

Roth, an assistant professor of sociology at the UA, studied a tightly-controlled cohort of securities workers on Wall Street. The 44 women and 32 men in the study all graduated with MBAs in finance from five elite schools between 1991 and 1993, and all landed jobs in the nine largest institutions operating during the bull market of the late 1990s.

But finance at this level involves more than money and business. There is a social component as well. Most of the highest paying jobs on Wall Street tend to be client-intensive, and most of these clients come from male-dominated corporations, Roth says.

As a result, traders and corporate executives engage in activities where women often feel uncomfortable. Roth says the women she interviewed said such activities included going to strip clubs, cigar smoking and elk hunting and other activities "in which their presence was unwelcome and that harmed their ability to develop solid client relationships."

"The women felt they really didn't have enough commonality to really bond with clients and develop the kind of relationships they would need to be successful, especially if they became more senior," Roth says.

Many financial professionals on Wall Street also are compensated with year-end bonuses that are allotted based often on subjective criteria and organizations are extremely secretive.

"I asked people where they thought they were ranked: top 10 percent, 25 percent, 50 percent or bottom 50 percent. A huge portion indicated they were in the top 10 or 25 percent. It is unlikely that was really true."

Editors Note: Messages for Roth can be left at the University of Arizona sociology department, although the quickest way to reach her is via e-mail at lroth@email.arizona.edu.