Thanks to the generosity of three professional meteorite hunters, the UA Lunar and Planetary Laboratory will own three samples of a rare kind of meteorite leftover from the earliest beginnings of the solar system.
Daniel Stolte
,
University Communications
May 15, 2012
Resources for the Media 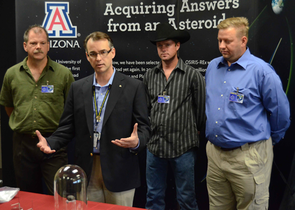 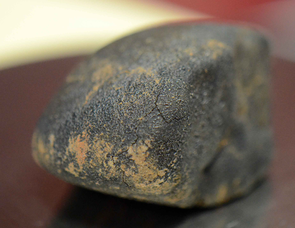 Its edges rounded during its violent entry into Earth's atmosphere, this meteorite was splattered with dirt upon impact. (Photo: Patrick McArdle/UANews) 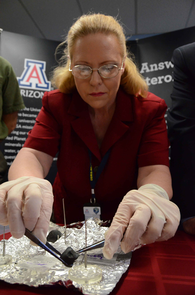 Dolores Hill of the Lunar and Planetary Laboratory carefully handles one of the pieces of which a sample will be donated for scientific study. (Photo: Patrick McArdle/UANews) 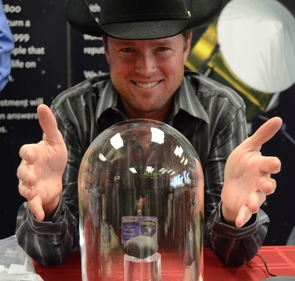 To the untrained eye, the black, smooth-edged lump that is sitting under a glass cover looks similar to a piece of charcoal. But to scientists Dante Lauretta and Ed Beshore from the University of Arizona Lunar and Planetary Laboratory, it is one of the most intriguing stones they have ever seen.

"This meteorite is the oldest rock you'll ever find on Earth. In fact, it formed 50 to 60 million years before the Earth even existed," said Lauretta, who is a professor of planetary science and principal investigator of NASA's OSIRIS-REx mission, which will send a spacecraft to return a sample from an asteroid in 2023.

On the morning of April 22, around 8 a.m., residents of Nevada and California looked up when a bright fireball streaked across the sky, followed by a boom that rattled windows all across the Sierra Nevada. Some later said the flash of light was so blinding it made them think of a nuclear explosion.

It turns out they weren't too far off: NASA later stated a meteorite that plunged deep into the Earth's atmosphere, scattering shrapnel across a remote, mountainous area near Sutter's Mill in California, blew up with about one-third of the energy of the Hiroshima bomb.

Professional meteorite hunters Michael Farmer, Greg Hupe and Robert Ward, who recovered several chunks of the meteorite, have donated samples to the UA Lunar and Planetary Laboratory for scientific study. They estimated the parent asteroid to be roughly van-sized and weighing as much as 10 (empty) semi-trucks, before it hit the atmosphere over Nevada and California.

"The Lunar and Planetary Laboratory has a long tradition of working with the commercial meteorite community for the benefit of planetary science," Lauretta said. "We are especially grateful to Michael, Greg and Robert for this contribution along with the many other valuable specimens they have donated to LPL over the years."

What makes these meteorites so special is where they come from and the fact that they were recovered only days after the spectacular fall, Lauretta said. About the size of a finger nail and weighing in at 1 gram each (approx. 1/30 of an ounce), the three meteorite fragments that will be cut from the collected specimens are a "huge" find for science, providing enough material for many studies on their origin and composition, which help scientists to better understand how the solar system came to be.

According to Lauretta, carbonaceous chondrites are rare finds that make up only about 5 percent of chondritic meteorites. Chondrites are basically rocky meteorites and represent the majority of meteorites discovered. Iron meteorites are also found, but only account for slightly more than 5 percent of all meteorites. When the cloud of gas and dust coalesced into the star, the planets and the asteroids that now make up our solar system, about 99 percent of that material ended up in the sun.

"Carbonaceous chondrites are similar in composition to the outer parts of the sun," Lauretta explained. "They are the most primitive and unaltered leftovers from the birth of our solar system."

"Freshly fallen meteorites are especially important to us because they are the least contaminated samples of asteroids that we can obtain here on Earth," Lauretta added. "This donation is an extraordinary opportunity because the OSIRIS-REx science team is already analyzing these kinds of meteorites in preparation for the sample return from an asteroid they will be visiting in 2019."

The Sutter's Mill specimen will allow the OSIRIS-REx team to test analytical techniques and inventory the organic materials in the meteorite that might otherwise be altered or erased by meteorites that have had long exposure to the Earth's atmosphere and water.

Robert Ward was the first to discover the area where the meteorite fragments hit the ground, a so-called strewn field measuring about 4 by 2 miles.

"It is the worst terrain to look for meteorites you could imagine," he said. "I crawled through poison oak, fighting mosquitoes and dodging rattlesnakes."

Only two days after the fireball, Ward was walking along an ATV trail with a landowner who was showing him the outline of the property, when he spotted a matchbox-sized chunk of black rock in the grass just inches from the tire track. It turned out to be the largest piece recovered so far and will remain in his private collection.

The samples donated to the UA include specimens collected before and after heavy rains drenching the strewn field. As soon as a meteorite hits the ground, the clock is ticking for meteorite hunters and scientists who study them.

"Being exposed to the elements alters their chemistry and contaminates them with earthly substances," said Dolores Hill, curator of meteorites for the Lunar and Planetary Laboratory. "As soon as we get a hold of the samples, we try to minimize contact and exposure, and seal them in sterilized, clean containers, where they remain until further analysis."

Meteorite donor Michael Farmer said, "When we heard that the scientific community started begging for samples as soon as they learned we were going to donate pieces of this meteorite to the UA, we doubled the amount. These are invaluable ‘practice samples' if you will, especially with respect to the upcoming OSIRIS-REx mission."

His partner, Greg Hupe, remembered driving up and down the strewn field, which was already swarming with thousands and thousands of locals armed with aluminum foil, hoping to come across a piece of the meteor.

"Today is a very special day for since it's my birthday," Hupe said. "What better present could there be than this opportunity of giving back to the scientific community?"

Ward said this was the most exciting meteorite recovery so far, eclipsing any find he has ever made.

"It's not every day that you discover a carbonaceous chondrite only 48 hours after the fall. It's been an incredible experience and an honor to contribute to such an important mission as OSIRIS-REx."

Farmer said the Sutter's Mill meteorite "supersedes every meteorite I have ever worked on."

"It's just incredible to think that only a few days ago, this rock that you pick up from the ground was somewhere behind the moon," he said. "And then it came down at a speed anywhere between 20,000 and 30,000 miles per hour, and now it's sitting here on this table."