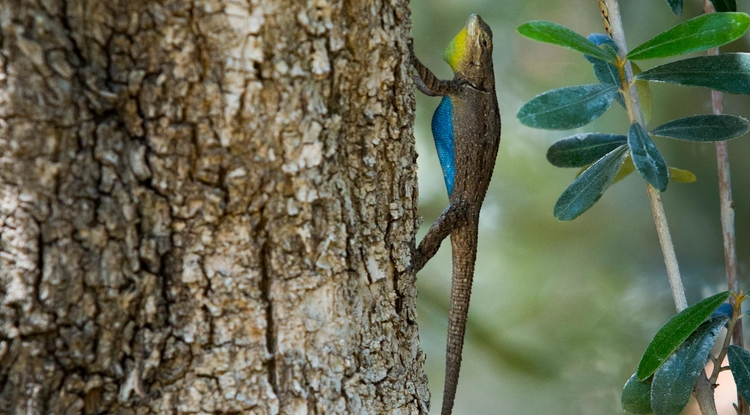 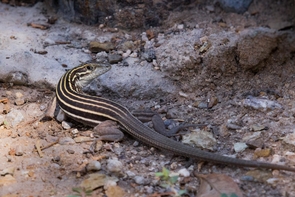 You hear them scurrying in the underbrush. You see them running up trees. Maybe you've even spotted one in your shower, or stuck to your kitchen window.

If you live in Tucson, you're accustomed to seeing lizards. But how much do you really know about them?

The Old Pueblo is home to roughly a dozen different species of lizards, says John Wiens, a University of Arizona professor of ecology and evolutionary biology who studies reptiles and amphibians.

On the UA campus, Wiens says, there are three main native species. The most common, active year-round, are tree lizards, which are small, brown or gray in color — and can be tough to spot because of the way they blend into rocks and tree bark. Sonoran spotted whiptails, with their long tails and dark and light stripes, are fast moving and always on the go. The desert spiny lizard has a thicker body and is longer than the other two, reaching up to 12 inches — and, true to its name, is covered in imposing spines. The whiptail and desert spiny lizards are active mostly in the warmer months, from March to October.

Though not native to Arizona, Mediterranean geckos also are common in warmer months, Wiens says. Attracted to insects around lights at night, they are the ones you may have spotted in silhouette on your windows, thanks to their sticky feet.

Lizards are without a doubt part of everyday life in the desert. They're also fascinating creatures, with some unique quirks that set them apart from other desert dwellers.

Wiens shared some insights into how lizards behave:

Lizards enjoy sunny days and are most active in Tucson during the warmer months.

However, when temperatures climb into the 90s and 100s, lizards try to avoid direct sunlight. They might seek a shady spot or retreat into a rock crevice or abandoned rodent burrow, Wiens says.

To beat the summer heat, lizards generally are most active in the early morning and around sunset — like many Tucsonans.

2. They do pushups for the ladies.

You might have seen a lizard doing pushups in your yard, on a wall or on the side of a tree. Tree lizards, desert spiny lizards and other members of the "iguanian" group of lizards engage in this behavior as a way to defend their territory against rival males and perhaps show off to potential mates, Wiens says.

As they do pushups, they show off bright blue patches on their bellies, and throat patches that can be blue, green, red, yellow or orange.

Both male and female lizards set up territories of just a few feet.

"An optimal territory for a male overlaps the territory of a bunch of females, and that's what they're going to be fighting other males over," Wiens says.

3. They can ditch their tails when trouble's afoot and regrow new ones.

Many lizards, including the native species on the UA campus, are born with tails that are pre-broken, so if they find themselves in a tough spot — maybe a cat or bird has them by the tail — they can easily detach their tails and run.

The tail will continue to wriggle for a few moments after removal, and if the lizard is lucky, the predator will go after the abandoned appendage instead.

The lizard's blood vessels close on their own to keep the critter from bleeding to death, and the tail will grow back after several months, Wiens says.

The tactic isn't totally without consequences, however. Wiens says research has shown that lizards without tails tend to lose social status with their peers and may have a harder time defending territories or getting mates.

Some species of lizards, including the Sonoran spotted whiptail and about half a dozen other whiptail species in Arizona, have evolved to be asexual. Even in the absence of males, they continue to reproduce, with the mother laying eggs that result in her exact clones, Wiens says.

What's especially fascinating, Wiens says, is that when two asexual female whiptails are kept together, they actually produce a greater number of fertile eggs than they would on their own. They even engage in pseudo copulation, with each taking turns acting as the male and experiencing hormone cycles that more closely mimic that of a male.

This fact might not be so quirky, but it's important to understand, Wiens says.

Lizards can look intimidating. Some even engage in intimidating behavior; for example, the regal horned lizard — known colloquially as the horned toad — may squirt blood out of its eyes when it gets upset.

However, most lizards are harmless to humans.

In fact, Gila monsters, native to the Southwestern U.S. and Sonora, Mexico, are the only venomous lizards in Arizona, and bites from them are rare, Wiens says.