The UA's Biosphere 2 made the list, alongside other structures that include the Eiffel Tower, Sydney Opera House and the Hubble Telescope.
La Monica Everett-Haynes
,
University Communications
April 21, 2009
Resources for the Media
Extra Info:

Upcoming Events at the Biosphere 2

April 25: Kathi Borgmann, a Science and Society Fellow at the Biospehere 2, will speak about birds from 1 to 3 p.m. Those attending will learn about the bird breeding season, which is currently in swing, and also how birds build nests and feed their offspring. 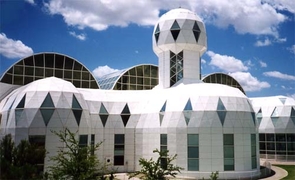 The UA runs the Biosphere 2, which is located north of Tucson in Oracle, Ariz.

A special book published by Life Books lists The University of Arizona's Biosphere 2 as one of the "50 Must-See Natural and Man-made Marvels."

The "Wonders of the World" edition lists the UA-managed science and education center as one among few places in the United States to be honored in the book, which is affiliated with Time Inc.

"It's really humbling and exciting news at the same time to be included in the company of such iconic structures," said Hassan Hijazi, director of external affairs for the 34.5-acre Biosphere 2 campus.

Other man-made wonders Life Books include the Eiffel Tower, the Sydney Opera House and the National Stadium in Beijing.

Outside of Tucson, the next nearest "wonder" is the Golden Gate Bridge in San Francisco, Calif. Other U.S.-based man-made wonders include the Empire State Building in New York City, Mount Rushmore in South Dakota. The Hubble Space Telescope and the International Space Station also made the list.

Among the natural wonders that made the list are the Galápagos Islands, the Serengeti in Africa, the Rock of Gibraltar, the Amazon and the Grand Canyon. Life Books also designed 14 "original wonders" to include The Great Pyramid of Khufu, Christ the Redeemer in Rio de Janeiro and the Great Wall of China.

Comparatively speaking, the Biosphere 2, constructed between 1988 and 1991, is much younger than many of the other notables. The first scientists moved into the facility in September 1991.

"This is a deserving recognition of Mr. Ed Bass's vision," Hijazi said. Bass and his company, Decisions Investment Corp., were the primary sources of funding for the project beginning in the 1980s.

"This is a very unique facility and, especially when the UA took over its function, it's become an ideal place to do science and address scientific grand challenges facing our world today," he added.

The UA, under the direction of the College of Science, began managing the facility during the summer of 2007.

At that time, the University's incentive was to revive the once-dormant facility by expanding educational programs and exhibitions while also introducing a broad range of scientific experiments meant to engage those studying water, ecology, energy and climate change.

"We hope that this designation in the Life special issue would bring more people to The University of Arizona Biosphere 2 so that we can continue to focus our mission of connecting science and society," said Travis Huxman, the director of Biosphere 2.

Meanwhile, "scientists, educators and researchers have continued to bridge the gap between laboratory and field-scale studies," Huxman said. "Biosphere 2 offers us these unique opportunities for the exploration of complex questions in earth sciences because of its ability to combine varying scales, precise manipulation and fine monitoring all together in controlled experiments."