Liquid Water Found Flowing on Mars? Not Yet 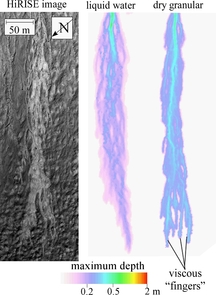 The image on the left is a portion of a HiRISE image showing a bright streak in a gully on the side of a crater in the Centauri Montes region of Mars. The two colored images were generated by the researchers' numerical computer model. The middle image shows how a deposit left by a pure liquid water flood would appear in the gully. The right-hand streak shows the deposit that would be left by a dry debris flow. Only the model for the dry debris flow generated the same fingering as seen in the HiRISE image. (Images by Jon Pelletier, UA) 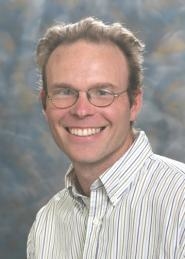 Liquid water has not been found on the Martian surface within the last decade after all, according to findings by a University of Arizona researcher and his colleagues.

The finding casts doubt on the 2006 report that the bright spots in some Martian gullies indicate that liquid water flowed down those gullies sometime since 1999.

"It rules out pure liquid water," said lead author Jon D. Pelletier, an associate professor of geosciences at the UA.

Pelletier and his colleagues used topographic data derived from images of Mars from the High Resolution Imaging Science Experiment camera, known as HiRISE, on NASA's Mars Reconnaissance Orbiter. Since 2006, HiRISE has been providing the most detailed images of Mars ever taken from orbit.

The researchers applied the basic physics of how fluid flows under Martian conditions to determine how a flow of pure liquid water would look on the HiRISE images versus how an avalanche of dry granular debris such as sand and gravel would look.

"The dry granular case was the winner," Pelletier said. "I was surprised. I started off thinking we were going to prove it's liquid water."

Finding liquid water on the surface of Mars would indicate the best places to look for current life on Mars, said co-author Alfred S. McEwen, a UA professor of planetary sciences.

"What we'd hoped to do was rule out the dry flow model – but that didn't happen," said McEwen, the HiRISE principal investigator and director of UA's Planetary Image Research Laboratory.

An avalanche of dry debris is a much better match for their calculations and also what their computer model predicts, Pelletier and McEwen said.

"Right now the balance of evidence suggests that the dry granular case is the most probable," Pelletier said.

They added that their research does not rule out the possibility that the images show flows of very thick mud containing about 50 percent to 60 percent sediment. Such mud would have a consistency similar to molasses or hot lava. From orbit, the resulting deposit would look similar to that from a dry avalanche.

The team's research article, "Recent bright gully deposits on Mars: wet or dry flow?" is being published in the March issue of Geology. Pelletier and McEwen's co-authors are Kelly J. Kolb, a UA doctoral candidate, and Randy L. Kirk of the U.S. Geological Survey in Flagstaff, Ariz.

In December 2006, Michael Malin and his colleagues published an article in the journal Science suggesting the bright streaks that formed in two Martian gullies since 1999 "suggest that liquid water flowed on the surface of Mars during the past decade."

Malin's team used images taken by the Mars Global Surveyor Mars Orbital Camera of gullies that had formed before 1999. Repeat images taken of the gullies in 2006 showed bright streaks that had not been there in the earlier images.

Subsequently, Pelletier and McEwen were at a scientific meeting and began chatting about the astonishing new finding. They discussed how the much more detailed images from HiRISE might be used to flesh out the findings of Malin team.

Pelletier had experience in using the stereoscopic computer-generated topographic maps known as digital elevation models, or DEMs, to figure out how particular landscape features form.

Kirk made a DEM of the crater in the Centauri Montes region where the Malin team found a new bright streak in a gully.

"This is the first time that anyone has applied numerical computer models to the bright deposits in gullies on Mars or to DEMs produced from HiRISE images," Pelletier said.

When he compared the actual conditions of the bright deposit and its HiRISE image to the predictions made by the model, the dry avalanche model was a better fit.

"The dry granular case is both simpler and more closely matches the observations," Pelletier said.

Pelletier said these new findings indicate "there are other ways of getting deposits that look just like this one that do not require water."

One of the team's next steps is using HiRISE images to examine similar bright deposits on less steep slopes to sort out what processes might have formed those deposits.

Meanwhile, the UA-led Phoenix Mars Mission, scheduled to land May 25, will dig into the red planet's soil and water ice just below the surface to analyze the history of liquid water that may have existed in the arctic region at one time.