This image, created using computer models, shows how the extreme gravity of the black hole in M87 distorts the appearance of the jet near the event horizon. Part of the radiation from the jet is bent by gravity into a ring that is known as the "shadow" of the black hole. (Image: Avery E. Broderick/Perimeter Institute & University of Waterloo)

Looking Into the Abyss of Space and Time

Scientists have observed what happens to matter as it spirals into a black hole 6 billion times the mass of our sun and 50 million light years away. The discoveries mark another step toward understanding the most bizarre objects in the universe, which include our very own black hole at the center of the Milky Way.
Jennifer Chu/MIT and Daniel Stolte/UANews
Sept. 27, 2012
Resources for the Media
Extra Info:

Scientists Prepare to Take First-Ever Picture of a Black Hole

Galaxy M87 with its jet of electrons and other sub-atomic particles streaming out from the black hole at nearly the speed of light as seen by the Hubble Space Telescope. (Photo: The Hubble Heritage Team (STScI/AURA) and NASA/ESA) 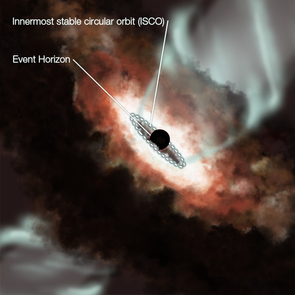 This artist's conception shows the region immediately surrounding a supermassive black hole (the black spot near the center). The black hole is orbited by a thick disk of hot gas. The center of the disk glows white-hot, while the edge of the disk is shown in dark silhouette. Magnetic fields channel some material into a jet-like outflow - the greenish wisps that extend to upper right and lower left. A dotted line marks the innermost stable circular orbit, which is the closest distance that material can orbit 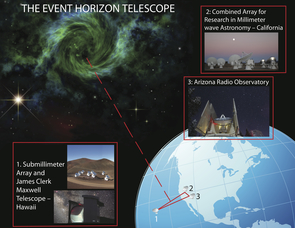 The Event Horizon Telescope is a global array of radio dishes that combine to form an Earth-sized virtual telescope with magnifying power that is 2,000 times that of the Hubble Space Telescope. As more dishes are added to the array, researchers will be able to observe the processes near black holes in ever greater detail. (Image: MIT Press Office)

The point of no return: In astronomy, it’s known as a black hole – a region in space where the pull of gravity is so strong that nothing, not even light, can escape.

At the heart of most galaxies may reside black holes that can be billions of times more massive than our sun. Such supermassive black holes are so powerful that activity at their boundary can ripple throughout their host galaxies.