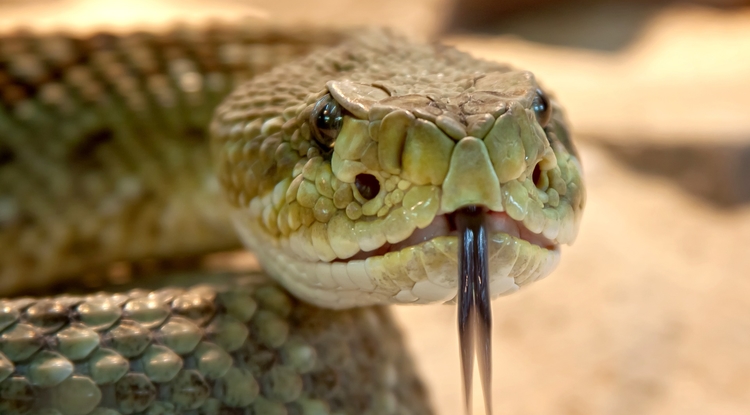 Giving hope that his treatment may work in humans, the UA's Dr. Vance G. Nielsen has published results showing that his carbon monoxide-iron-based therapy can inhibit snake venom's effects for up to an hour in animals. The treatment eventually could be delivered with a device similar to an EpiPen autoinjector and stocked on ambulances and in first-aid kits.
UA Health Sciences
Oct. 11, 2017
Resources for the Media

A University of Arizona researcher developing a therapy to prevent or delay the dangerous results of rattlesnake and other venomous snakebites in humans has shown that a combination of carbon monoxide and iron inhibits snake venom's effects for up to an hour in animals, a major advance in bringing the treatment to market.

Snake venom is hemotoxic — destructive to the ability of blood to clot — and can cause the destruction of fibrinogen, an essential protein that enables blood to clot and stop excessive bleeding. Snake-venom enzymes also can cause abnormally fast clotting, which can lead to heart attack, stroke and damage to the body's organs. Both reactions are inhibited by the therapy.

Dr. Vance G. Nielsen, professor and vice chair for research in the Department of Anesthesiology at the UA College of Medicine – Tucson, has confirmed that, if given soon enough after a snake bite, the carbon monoxide-iron-based therapy directly can inhibit snake venom's ability to block blood clotting in laboratory animals for as long as an hour. Nielsen also demonstrated for the first time in the test tube that the therapy blocks snake venom's ability to cause abrupt clotting. The findings recently were published in the journals Basic & Clinical Pharmacology & Toxicology and the Journal of Thrombosis and Thrombolysis.

Time is of the essence following exposure to rattlesnake venom because without fibrinogen, blood does not clot and the risk of internal bleeding increases, resulting in serious health consequences such as blood entering the brain or intestines. In addition, abnormally fast clotting in the blood vessels can deplete clotting factors and cause excessive bleeding or the clots can block blood vessels, causing lethal loss of blood flow to tissue.

Nielsen has found that the therapy works against the venom of more than three dozen species of snakes throughout the world.

"The excitement is that we have proven that carbon monoxide has the ability to directly inhibit essentially all hemotoxic venom enzymes in the test tube and that it blocks the effects of the Western Diamondback rattlesnake's venom in animals," Nielsen said. "The effects on coagulation of some of the deadliest snake venoms in the world — South American, North American and even African, such the cobra's — can be delayed by a treatment that could be delivered with a device much like an EpiPen used for allergic reactions."

Nielsen is working toward developing the treatment to work in humans. To further advance the research, he is seeking commercial backing and is working with Tech Launch Arizona, the UA office that commercializes inventions stemming from University research, to protect the intellectual property of the treatment and strategize ways to get it into the hands of health professionals.

He also is collaborating with Dr. Leslie Boyer, a toxicologist and founding director of the UA VIPER Institute and professor of pathology and pediatrician. Boyer develops antivenom treatments for snakebite and scorpion stings. She is a member of the UA BIO5 Institute.

"Our aim is to bring to market a therapy that is safe for humans and animals, has a long shelf life, is readily available and can be stocked in ambulances, or even first-aid kits for campers or hikers, to save lives," Nielsen said.