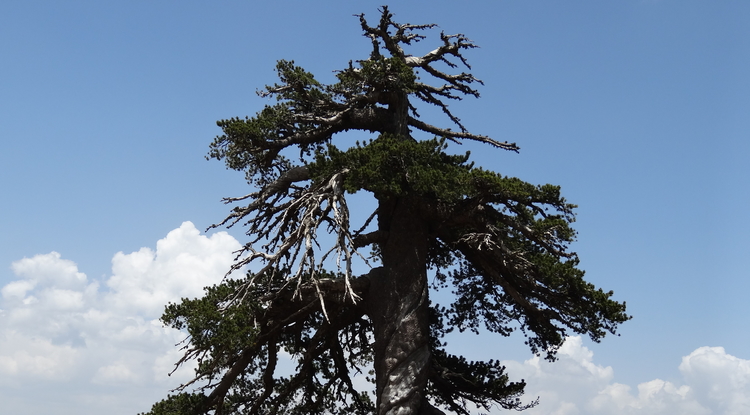 This Bosnian pine, dubbed Adonis, is the oldest known living tree in Europe. The tree is more than 1,075 years old. (Photo: Oliver Konter/University of Mainz, Germany)

Timeline of the life of Adonis, currently the oldest known living European tree:

941 — Adonis is a seedling. The Byzantine Empire is at its peak. From the North, the Vikings reach the Black Sea.

1041 — Adonis is 100 years old. In China, a book is published describing gunpowder. A man called Macbeth is crowned King of Scotland.

1191 — Adonis is 250. The universities of Oxford and of Paris have been founded. The third crusade battles Saladin in the Holy Land.

1441 — Adonis is 500. The Ottoman Empire conquers Greece. Many Greek scholars flee to the west, influencing the Renaissance. In Sweden, the first parliament is held in Arboga. Johannes Gutenberg is about to test his first printing press.

1691 — Adonis is 750. Isaac Newton has formulated his Laws on Motion. Ice cream, tea and coffee are introduced in Europe. 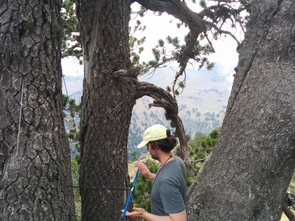 UA geosciences doctoral student Matthew Meko cores a Bosnian pine. He was part of the 2016 expedition that determined that a Bosnian pine is the oldest known living tree in Europe. (Photo: Soumaya Belmecheri/UA Laboratory of Tree-Ring Research)

A Bosnian pine living in the highlands of Greece has been shown to be more than 1,075 years, making it the oldest known living tree in Europe.

Because of its venerable age and where it was found, the scientists dubbed the ancient pine "Adonis," after the Greek god of beauty and desire.

The tree lives in a barren alpine landscape at the upper limit of tree line, along with about a dozen other aging members of its species, Pinus heldreichii.

UA researchers Valerie Trouet, Matthew Meko and Soumaya Belmecheri were on expeditions in 2015 and 2016 to find and sample old trees to learn about the region's environmental history. Scientists can reconstruct past climate by looking at width and density of the annual growth rings of trees.

Adonis and the other Bosnian pines at the site just look old, said Trouet, a UA associate professor of dendrochronology. Adonis itself sports the twisted, spiral trunk and the thinning of leaves on top that characterize aged trees.

"To find an old tree like that in a country that's been densely populated for so long — it’s amazing," Trouet said.

In 2013, Swedish dendrochronologist Paul Krusic took a 24-inch (60 cm) core from Adonis to count its rings, but his coring tool was too short to reach the center of the tree. Even so, counting the rings from that core revealed the tree was more than 900 years old.

In 2016, the team came back to take more samples from the old trees, including Adonis. This time the group was armed with a coring instrument one meter long, said Meko, a UA doctoral student in geosciences.

Paul Krusic, who led the 2016 expedition, said, "It is quite remarkable that this large, complex and impressive organism has survived so long in such an inhospitable environment, in a land that has been civilized for over 3,000 years."

Adonis and its fellows are all individual trees with their own individual root system — each one is a unique individual, Trouet said. There are some plants and trees that grow as clonal organisms where the root systems may be older than Adonis, but the above-ground trunks are young.

Other trees in Europe are known to be at least 700 years old, Trouet said. Because Europe has been densely populated for so long, most trees that sprouted more than 500 years ago have been long since cut down.

Some of the oldest known living trees are the bristlecone pines of the Western U.S. that live in desolate, windswept, arid, alpine habitats near treeline — habitats similar to where Adonis lives. Bristlecone pines are known to live more than 4,000 years.

The researchers plan to learn about the past climate of Greece and the Balkans because those regions are strongly influenced by the jet stream, Trouet said. The team anticipates the climate records stored in old Balkan and Greek trees will provide new insights into Europe's environmental history.

The millennium-old trees were discovered during research expeditions conducted by the Navarino Environmental Observatory, a cooperation among Stockholm University, the Academy of Athens and TEMES S.A. The observatory studies climate change and its impact on environment and humans in the Mediterranean region.