Did you know that Southeastern Arizona is home to some of the most beautiful and spectacular beetles in the world? Here is an opportunity to learn more about and interact with 30 different species - alive and crawling.
Daniel Stolte
,
University Communications
Aug. 24, 2010
Resources for the Media
Extra Info: 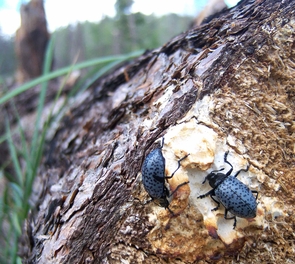 (Click to enlarge) The Sky Islands around Tucson are home to many species of beetles, such as these Pleasing Fungus Beetles, seen here munching on fungus growing on a fallen log on Mount Lemmon. (Photo by D. Stolte) 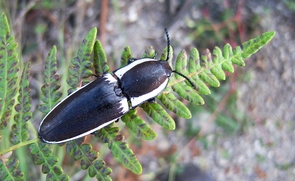 (Click to enlarge) When turned on its back, the Giant Click Beetle engages a locking joint between its thorax and abdomen to flick itself into the air and get back on its feet. This species will be present at "Meet the Beetles!" (Photo by D. Stolte) 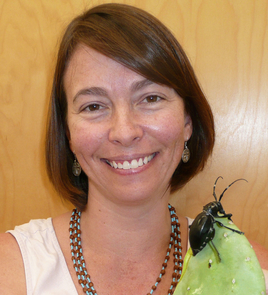 (Click to enlarge) Wendy Moore with a Cactus Longhorn Beetle. This species has fused wing covers, preventing the beetle from flying but helping it retain precious moisture. (Photo by J. Schaller)

Bumbling through the air like misguided toy airplanes, Palo Verde Root Borer beetles are a familiar – and often intimidating – sight to Southern Arizona residents. After spending several years as larvae gnawing through the roots of Mexican Palo Verde trees, the adult beetles emerge when the first monsoon rains drench the desert soil.

"Measuring up to five inches, the Palo Verde Root Borer is the longest beetle found in the Sonoran Desert," said Wendy Moore, who recently joined the UA's College of Agriculture and Life Sciences as an assistant professor of Insect Systematics.

She reaches into a clear plastic box sitting on a bench in her lab and lifts up a folded paper towel protecting a magnificent specimen of the dark brown, hefty insect that goes by the scientific name of Derobrachus hovorei. Its sturdy, whip-like feelers span almost the entire length of its body and are attached next to a set of ferocious-looking jaws.

"This is how you pick them up without getting bitten," Moore says. She grabs the animal between thumb and index finger where its wing covers are attached to the body and lifts it out of its little habitat. The beetle doesn't seem to mind.

"These beetles are not dangerous in any way," said Moore, who is also the curator of the UA's insect collection. "Sure, they can bite with their powerful mandibles, but only if they're handled improperly."

Fearsome as they may look, Palo Verde Root Borers will never attack or deliberately bite. As a matter of fact, they don't even eat.

"Once the grubs change into adult beetles and emerge from the ground, their life is almost over," Moore says. "All they do is fly around in search for a mate. Once they accomplish that, they die. That's why we have difficulty keeping them in the lab. They won't eat anything."

The Palo Verde Root Borer is one of about 30 different beetles that will be on display, alive and crawling, at the "Meet the Beetles!" event at the Arizona-Sonora Desert Museum on Saturday, Aug. 28.

"We want to share our excitement about these animals," said Moore, who organizes the event. "Beetles don't hurt you, they're not blood-sucking bugs, you won't get a disease from them, and they're amazingly beautiful."

Music by The Beatles will accompany the event, which will be held in the museum's Desert Garden from 7-9 p.m.

During a 30-minute presentation, Moore will share fascinating and surprising facts about beetles and highlight some of the most attractive ones in our area. Visitors can observe and handle some of Arizona's most beautiful beetles at tables staffed by students and volunteers.

No other animal group has as many species to show for as beetles, she said. Each performs an important – though often still unknown – role in the ecosystem.

"So far, roughly 350,000 species of beetles have been described. Some are pollinators, some help decompose dead organic matter, but what a lot of them do we don't really know yet."

Entomologists such as Moore do not have to venture deep into rain forests or other wild places to discover new species of beetles: Vast numbers lie tucked away in the drawers of museum collections all over the world, waiting to be described.

"The best places to find local beetles are the sky islands," Moore said, "the mountainous areas in southeastern Arizona. That's where we collected most of the ones we are going to show at ‘Meet the Beetles!'"

After the event, the animals will be returned to the places they were collected.

"This is a good time of year to find beetles," Moore says. "Most are active at night and hide during the day, so next time you're out hiking, look under rocks and logs."

"When they fly, beetles use the moonlight for navigation," she adds. "That's why they bump into lights – they confuse it with moonlight."

Many beetle species live on certain plants and can be found when those are in bloom. According to Moore, Desert Broom is a plant that seems to be especially attractive to beetles.

Some beetles found in the Sonoran Desert have evolved fascinating adaptations to cope with water loss and heat.

The Ghost Beetle, for example, secretes a wax covering during the driest and hottest time of the year, turning this normally dark beetle a ghostly white, Moore writes in "Beetles of the Sonoran Desert," a folding pocket guide highlighting some of the most common beetle species around Tucson. The wax keeps precious water inside the insect's body while the white color helps prevent overheating by reflecting sunlight.

As is often the case in evolution, innovation comes at a price. The Cactus Longhorn Beetle (Moneilema gigas) traded its ability to fly for an improved moisture-retaining design.

"Its wing covers are fused together and it doesn't have functioning wings anymore," Moore said. "The fused shell conserves water, but the inability to fly limits this beetle's dispersal, of course."

Another species protects itself by pretending to be a different, much fiercer creature: Tragidion densiventre, which belongs to a group known as longhorn beetles, holds its wing covers and antennae in the same way the Tarantula Wasp does, which reportedly packs one of the most painful stings in the animal kingdom.

The Bombardier Beetle (Brachinus elongatulus), which will be on display at the event, defends itself using an entirely different but equally clever strategy: When harassed, it explosively discharges boiling hot chemicals.