The UA-led OSIRIS-REx asteroid sample return mission is a tribute to the late scientist, who was equally passionate about extraterrestrial discovery and raising up the next generation of planetary explorers.
Doug Carroll
,
University Relations – Communications
Sept. 7, 2016
Resources for the Media
Extra Info:

About the Atlas V rocket: Formerly operated by Lockheed Martin and now by United Launch Alliance, a joint venture of Lockheed Martin and Boeing. Assembled in Decatur, Alabama. The inaugural flight by an Atlas V was made on Aug. 21, 2002. The Mars Reconnaissance Orbiter was launched aboard an Atlas V 401 on Aug. 12, 2005. Atlas V has a perfect mission success rate in more than 60 launches. After only five minutes in flight, the rocket will lose 94 percent of its weight. Within an hour, the OSIRIS-REx spacecraft will be released from the launch vehicle.

About Space Launch Complex 41: Located on the north end of Cape Canaveral Air Force Station, looking out over the Atlantic Ocean. Its track record includes launches of the Mars Reconnaissance Orbiter in December 2004, the New Horizons spacecraft to Pluto in January 2006, the Juno mission to Jupiter in August 2011 and the Mars Science Laboratory in November 2011. One of three launch pads currently active at Cape Canaveral.

What:
OSIRIS-REx launch
When:
4:05 p.m. MST Thursday; live on NASA TV
Where:
Cape Canaveral, Florida
Members of the media covering Thursday's launch received a closer look at the rocket after its rollout Wednesday. (Photo: Bob Demers/UANews) 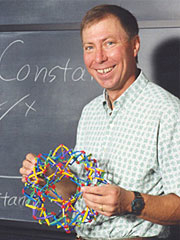 Tim Swindle (above), director of the UA's Lunar and Planetary Laboratory, on Michael Drake: "I think what would excite him the most is the number of people who have pulled together to make this mission possible." (Photo: Bob Demers/UANews)

CAPE CANAVERAL, Fla. — The embodiment of the late Michael Drake's biggest questions about the universe stood silently in coastal Florida's sunshine on Wednesday, nearly ready for a seven-year odyssey that will be something of an extraterrestrial high-wire act.

A sleek Atlas V 411 rocket, topped by a Lockheed Martin spacecraft, was slowly rolled out in midmorning from United Launch Alliance's Vertical Integration Facility — a space-age hangar — to Space Launch Complex 41 at Cape Canaveral Air Force Station. The OSIRIS-REx mission, conceived by Drake 12 years ago and finally green-lighted by NASA only four months before his death in 2011, is the first U.S. mission to send a robotic spacecraft to retrieve a sample from a primitive carbonaceous asteroid.

Liftoff is scheduled for 4:05 p.m. MST on Thursday, and the weather forecast is favorable for a successful launch.

In his 38-year tenure at the University of Arizona, the English-born Drake studied lunar rocks, meteors and the moons of Saturn. He helped map the surface of Mars. But nothing captured his imagination quite like an asteroid sample return mission, which he thought would reveal significant clues to the origin of the solar system and the beginnings of life itself.

Drake was "curious about the big questions, the questions like 'How did Earth get its water?' and 'How did it get its organic molecules?'" said Tim Swindle, who succeeded Drake as director of the UA's renowned Lunar and Planetary Laboratory. "This was a mission that could go after at least a chunk of that."

As Swindle and others from LPL — past and present — gathered for a reunion at a Cocoa Beach hotel on the eve of the launch, Drake's profound influence on space science — and on them — was a popular topic of conversation.

"We're a tight-knit group," said Jani Radebaugh, who received her doctorate in planetary science in 2005 from the UA and is now an associate professor of geological sciences at Brigham Young University. "We're realizing that we're here because Mike's vision for OSIRIS-REx came together.

"He was a lab guy, a hands-on geochemist who felt that nothing compared with bringing samples back from a space mission. But that's difficult to achieve. This is a really bold idea, to have the building blocks of the solar system in your hands. It's too bad he's not around to play with those things himself."

In addition to the challenge of carefully plucking at least 60 grams (2 ounces) of surface material from the asteroid Bennu, the mission is risky because of its sheer length. The spacecraft won't get to the asteroid until late in the summer of 2018, and it won't attempt a sample until two years after that. Finally, in September 2023, the sample return capsule is expected to land in the Utah desert, about 80 miles west of Salt Lake City. Over that seven-year period, a certain amount of turnover in personnel is expected — and yet the mission must remain on course.

"Mike was smart enough to figure out that this would be a long, multigenerational mission," Swindle said, adding that training has been essential.

By comparison, the UA-led Phoenix Mars Lander mission launched in August 2007 and reached the Red Planet in less than a year. The mission was considered done in November 2008, its experiments and observations completed. The cost of that mission was less than half of the billion-dollar OSIRIS-REx, which will bring scientists from all over the world to the former Science Operations Center — now the Michael J. Drake Building — north of the UA campus.

Drake's aggressive approach to science may have been matched only by his enthusiastic encouragement of the next generation of scientists. Swindle estimates that more than 100 UA students have been involved in various aspects of OSIRIS-REx to date, and about two dozen UA graduate students are in Florida to watch the launch.

"Mike believed that the best research department should also be the best teaching department," Swindle said. "That was a mantra of his. He had a passion for picking out younger people."

Drake also wasn't averse to doing some recruiting in the hinterlands.

"He cared about kids and wanted them to be in the STEM fields," said Dan Cavanagh, the chair of LPL's external advisory board. "We'd go into the Sahuarita school district and he'd say, 'I want you kids to get scholarships and come to work for me.'"

When they came, so did the success stories. The most notable one would be that of Dante Lauretta, handpicked by Drake to be the deputy principal investigator for OSIRIS-REx. The two men worked side by side on the project for seven years, through two failed proposals, with Lauretta becoming the mission's principal investigator after Drake died of cancer.

"Michael Drake was my friend and mentor and the visionary who brought me into the OSIRIS-REx program," Lauretta said. "We miss him. He's still with us. He's in our hearts and souls and looking down on us today. He'd be having the time of his life here."

Said Swindle: "I think what would excite him the most is the number of people who have pulled together to make this mission possible. Young people have stepped into roles they wouldn't have dreamed of being capable of doing. Older ones who started off the mission have stepped aside to let younger ones take over. The whole thing of it being a team that works so well together, that's the thing he would be proudest of."