One of the rising stars in intercollegiate athletics, Byrne has served as director of athletics at Mississippi State University since 2008.
Johnny Cruz
March 22, 2010
Resources for the Media 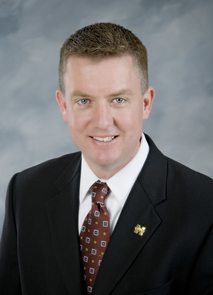 President Robert N. Shelton today announced his selection of Greg Byrne, currently the director of athletics at Mississippi State University, to be the next athletics director at the University of Arizona, effective May 1. Byrne's appointment is subject to approval by the Arizona Board of Regents.

"Greg is one of the real rising stars in intercollegiate athletics," said Shelton. "In his tenure at MSU, Greg has attracted great coaches, reshaped their fundraising efforts, overseen new capital projects and put together a new multimedia package. Of equal importance, Greg led the efforts to raise the academic accomplishments of MSU's student athletes. He is going to be an outstanding addition to our University."

Byrne was named director of athletics at MSU in February of 2008 after serving as associate athletic director for external affairs since 2006. Byrne had 15 years of professional experience in athletics before assuming the MSU AD's position, with a primary emphasis in fundraising. He has been directly involved in raising over $120 million in gifts during his career.

There are not many opportunities that would tempt me to leave Mississippi State," said Byrne.  "But when Arizona called I owed it to my family to listen. Arizona is one of the truly elite programs. They have great traditions, great support from their fans, and a deeply rooted commitment to helping student-athletes succeed. It is just an ideal opportunity for me and my family."

Under Byrne's tenure at Mississippi State the academic success of student athletes has shown strong improvement. MSU recorded the highest GPA in its history in the fall of 2009 with an overall 2.99. Every team was above the 925 mark in APR or had recorded its highest APR level to date.

Byrne began his career in athletics with the Fiesta Bowl from 1993-1995. He then moved to the University of Oregon in 1995, where he was regional director of development for the athletics department. From 1998 to 2002, Byrne was at Oregon State University as associate AD for development. Managing an eight-person staff, he replaced an antiquated 60-year old fund-raising organization and increased annual giving from $1 million to over $5 million in cash during his tenure. He assisted in raising more than $30 million in capital gifts, and participated in securing a $12.5 million gift to rename the Beavers' football stadium.

From 2002 to 2005, Byrne was at the University of Kentucky as associate AD for development and fundraising. He oversaw efforts that raised annual gifts from $4 million to $9 million annually. While in Lexington, Byrne led a $35 million athletic facility campaign and participated in the design, funding and marketing for Kentucky's $30 million basketball practice facility.  Byrne then moved to Mississippi State, first as associate AD, and then, at the age of 36, he became the youngest person to lead an athletic program at the NCAA Division I-A level.

Byrne earned a bachelor's degree from Arizona State University in 1994, and has a master's degree from Mississippi State. He is the son of longtime athletic administrator Bill Byrne, who is currently the director of athletics at Texas A&M. Byrne and his wife Regina have two sons, Nick, 14, and Davis, 12.