Paul Muhlrad
May 2, 2003
Resources for the Media 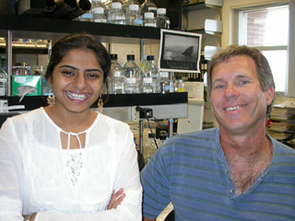 Living cells have "molecular paper shredders" that purge outdated genetic instructions. The subcellular structures were discovered by Ujwal Sheth, a University of Arizona Ph.D. candidate in molecular and cellular biology, and her advisor, Regents' Professor Roy Parker. The pair reported their findings this week in the journal Science.

"Don't kill the messenger" is one axiom that living cells rarely heed. In fact, one of the quickest and surest ways for a cell to revise its moment-by-moment agenda is to destroy messenger RNAs, according to Parker. Messenger RNAs are the stringy molecules that relay the working orders of the cell from the genes to the protein-making factories.

Throughout their daily lives, cells constantly transcribe the master instructions, archived in the DNA, into temporary messenger RNA memos. After the RNA instructions have been satisfactorily carried out, the cell must destroy them, Sheth explains. Cells also have a surveillance system for locating and deleting the occasional RNA memo containing a mutation, or misspelling, which could have detrimental consequences. "It's good to catch those RNAs early in life and destroy them rapidly," Sheth said. Several human diseases result from failures in this search and destroy system.

Parker's laboratory, which is also a part of the Howard Hughes Medical Institute, is internationally renown for studying messenger RNA degradation. Using common baker's yeast, a single-celled fungus, as their study model, the lab team has untangled a complex series of events leading to the death and destruction of a messenger RNA molecule. It seems to work the same way in most other organisms, including humans. First, the "tail" of the long-chained molecule gets snipped off the back end of the strand. Next, a protective chemical "cap" is removed from the front end. Finally, the rest of the molecule is degraded piecemeal from front to back.

Sheth was particularly interested in a protein that triggers the RNA decapping reaction, and wanted to pinpoint the protein's position in yeast cells. In a bout of genetic engineering trickery, she borrowed a gene from a bioluminescent jellyfish, and spliced it to the gene encoding her decapping protein. When she placed the patchwork gene into yeast cells, the cells produced many copies of the decapping protein, each tethered to its own fluorescent green beacon. The proteins literally illuminated their place in the cell. Using a sensitive microscope to detect the light, Sheth saw one or two tiny spots of green in every cell.

Encouraged by the observation, Sheth tagged other RNA degradation proteins with fluorescent beacons, and found that many of them were positioned in the same spots as the decapping enzyme. Up until this point, the notion was that the enzymes carrying out RNA degradation just floated around in the soupy liquidthe cytoplasm--that comprises most of a cell's interior, but these results suggested that messenger RNA destruction might take place in discrete spots in the cell. Still, the evidence only pointed to guilt by association. The observation that key degradation proteins are all huddled in one corner of the cell strongly implicated, but didn't prove, that that is where RNAs are destroyed.

The proof came from another molecular flashlight experiment. Sheth used a genetically engineered messenger RNA containing degradation "speed bumps" sequences that make it practically impossible for the decay enzyme to drive through and eat away the molecule. The end of the RNAeverything past the obstructing sequences is shielded from destruction. The engineered molecule also had another feature. The "stable" end of the molecule contained a segment from another RNA borrowed from a virus. A particular protein from the same virus can bind tightly to the viral RNA segment. Sheth placed the gene for the engineered RNA into yeast cells. She also inserted a gene encoding the sticky viral protein into the same cells, but this version of the gene was spliced to the jellyfish gene for the fluorescent beacon.

Sheth predicted that molecules of the synthetic RNA would eventually find their way to the sites of RNA degradation, where they would get snarled up because their protective sequences prevent them from complete destruction. And these partially degraded RNA molecules should have the fluorescent protein stuck to them, betraying their position in the cell. As predicted, the tagged RNA molecules, trapped in the midst of their destruction, lit up the same spots where Sheth had previously found the degradation proteins. Parker and Sheth named the newly discovered cell structures "P-bodies."

Officially, the P stands for "processing," but Parker and Sheth prefer to think of them as "purgatory-bodies." In some circumstances, the researchers suspect, messenger RNA molecules entering a P-body may not be condemned to immediate death. Instead, they might stay in the P-body for long-term storage, with a chance for release in case they're needed again in the future.