Astronomy Picture of the Day

What:
Public Observing and Science Programs
When:
For times, contact Steward Observatory at 520-626-8122
Where:
Mount Lemmon SkyCenter 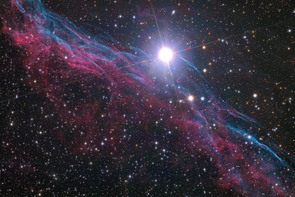 (Click to enlarge) This image of the Witch's Broom Nebula, NGC 6960, taken a few weeks ago by Adam Block with the 24-inch Mount Lemmon SkyCenter telescope, is the Aug. 19 Astronomy Picture of the Day. 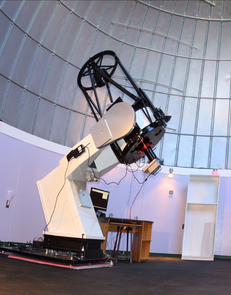 The 24-inch Mount Lemmon SkyCenter telescope is the one the public uses in programs offered through the UA's College of Science and Steward Observatory. SkyCenter astronomer Adam Block used it to take the Aug. 19 Astronomy Picture of the Day.

A stunning new astronomical image of the "Witch's Broom" Nebula taken by Adam Block of The University of Arizona Mount Lemmon SkyCenter is today's "Astronomy Picture of the Day."

Block of the UA's Steward Observatory, who coordinates public programs in astronomy at the SkyCenter, used the SkyCenter's 24-inch telescope to produce the image.

The telescope is the same one that the public uses in SkyNights, the astronomy evenings that Block runs atop 9,157-foot Mount Lemmon in the Santa Catalina Mountains north of Tucson.

It is also the telescope that Block, an astrophotographer of renown, is using this week to teach a 3-day SkyCenter workshop called "Making Every Pixel Count." Block will share his expertise in producing spectacular images of deep sky objects with a dozen enrolled participants.

The Astronomical Picture of the Day Website, known as APOD, was founded in 1995 by two professional astronomers, Robert Nemiroff of Michigan Technological University in Houghton, Mich., and Jerry Bonnell of NASA's Goddard Space Flight Center in Greenbelt, Md. The team, who continue to write, coordinate and edit APOD, has by now assembled the largest collection of annotated astronomical images on the Internet.

"I took three hours of unfiltered data and combined it with 50 minutes of color data in each filter (red, green and blue), so the total exposure time was 5.5 hours," he said.

Nemiroff and Bonnell posted this explanation along with Block's image:

"Ten thousand years ago, before the dawn of recorded human history, a new light must suddenly have appeared in the night sky and faded after a few weeks. Today we know this light was an exploding star and record the colorful expanding cloud as the Veil Nebula.

"Pictured here is the west end of the Veil Nebula, known technically as NGC 6960, but less formally as the Witch's Broom Nebula. The expanding debris cloud gains its colors by sweeping up and exciting existing nearby gas. The supernova remnant lies about 1400 light years away towards the constellation of Cygnus. This Witch's Broom actually spans over three times the angular size of the full moon. The bright star Cygnus is visible with the unaided eye from a dark location but is unrelated to the ancient supernova."