The UA's Bachelor of Arts in Law program recently surpassed 700 students and also will be offered online for the first time this fall.
Alexis Blue
,
University Communications
July 11, 2017
Resources for the Media
Marc L. Miller, dean of the James E. Rogers College of Law 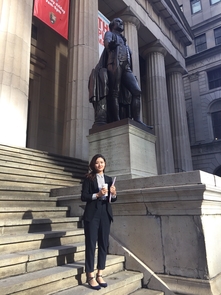 As a university student in China, Keyan Zhu was interested in learning about law but wasn't sure where to start. Then a friend who attended the University of Arizona encouraged her to look at a groundbreaking new program at the UA — the first Bachelor of Arts in Law program offered in the United States.

Zhu took her friend's advice and traveled overseas to attend the UA, where she earned her B.A. in law in 2016. She now works as a paralegal at a corporate and immigration law firm in New York, where she conducts research and prepares contracts and other documents for attorneys. She plans to eventually pursue her Juris Doctor degree and practice law in the U.S.

Zhu is one of about 70 students to date to complete the UA's Bachelor of Arts in Law program, which launched in 2014 in response to dramatic and ongoing changes in the legal profession driven by technology, globalization and the substitution of services traditionally provided by lawyers.

The degree prepares students for jobs in which a strong knowledge of law is advantageous but a Juris Doctor degree is not required. These include jobs in corporate compliance, city planning, water resources management, business management, health care administration, human resources, policy analysis and legal technology consulting.

"Creating the nation's first undergraduate law degree paves the way for a new category of legal professional for whom we see significant and growing demand," said Keith Swisher, director of the B.A. in law program. "An increasing number of fields require professionals who can navigate legal issues, and this program prepares students to do just that."

Enrollment in the program, a partnership between the UA's James E. Rogers College of Law and the UA School of Government and Public Policy in the College of Social and Behavioral Sciences, recently surpassed 700 students. The degree also will be offered for the first time online in the fall.

In many other countries, the study of law is part of an undergraduate education, but the UA is the first U.S. university to offer a B.A. in law, thus redefining legal education in the United States, says Marc L. Miller, dean of the UA College of Law.

"We believed that democratizing legal education would produce both great benefits for the students and greater societal access to legal services," Miller said. "We're certain that the future of law and the vast range of regulated environments requires legally trained professionals including a greater variety and at lower cost than licensed attorneys and paralegals. If we're right, this innovation will spread across the country, as have several other Arizona Law innovations over the past four years."

Unlike pre-law, legal studies and criminal justice majors at other universities, or paralegal programs, which focus on legal skills for supporting lawyers, the UA's B.A. in law program provides foundations in legal reasoning, or how to "think like a lawyer," as well as legal doctrine, legal procedure, and legal writing and research.

The degree program includes rigorous training in critical thinking, analysis and complex problem resolution, as well as a deep understanding of the sources of law and the inner workings of the legal system. Students take core law courses that provide an understanding of topics such as constitutional law, administrative law, contracts and torts, and civil and criminal procedure. They are able to specialize in areas such as international law, family law, environmental law, immigration law or business law, among others.

For Zhu, her coursework on contracts and real-estate law has proved invaluable in her current position.

"I would encourage anyone who is interested in law to enroll in this law program, so they can prepare themselves before attending law school, and figure out what areas of law they're interested in," she said. "One of my professors told me the courses we take in this program are not very dissimilar to JD law courses, so it is also a great choice for someone who wants to do a law-related job right after graduation."

Another 2016 B.A. in law graduate, Sarah Saxton, said the structure of her UA law classes and their focus on critical thinking gave her an advantage over other first-year law students at the University of Chicago. For example, unlike some of her Chicago classmates, she was accustomed to being randomly called on in class and asked to discuss the details of specific cases.

"In the B.A. program, they tested me in the same way I'm being tested here," said Saxton, who wants to go into corporate law. "It does a really good job of letting you know what you're in for with law school."

The B.A. in law program has attracted students with a wide variety of backgrounds and interests. An estimated 53 percent of the program's students come from ethnically diverse backgrounds, and 59 percent are female. Some of the most popular double majors and dual degrees for students in the program include political science, criminal justice, Spanish and psychology.

Miller anticipates other universities nationwide will begin to emulate the B.A. in law model, and some schools already have reached out to the UA for advice on starting similar programs.

"We knew there was broad interest from students in almost every other discipline to integrate dimensions of legal education in their education," Miller said. "Today this is a dramatic innovation. Years from now, I expect this to be the model, akin to the broad undergraduate training in business, followed by a narrower path to the MBA after some time in real-world settings."

The B.A. in law program is among several recent efforts by the UA law school to enhance the quality and accessibility of legal education. Some of the others: