The University of Arizona Press has also released a series of new books. To read more, visit http://uanews.org/click/22947/1 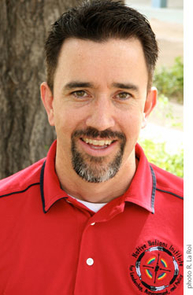 Ian Record's first book, "Big Sycamore Stands Alone: The Western Apaches, Aravaipa and the Struggle for Place," is being published this week by the University of Oklahoma Press.

Western Apaches have long regarded the southeastern corner of Arizona, including scenic Aravaipa Canyon, as their sacred homeland.

A new book by a University of Arizona researcher examines the relationship that has evolved between the Western Apaches and their place.

"Big Sycamore Stands Alone: The Western Apaches, Aravaipa and the Struggle for Place," is being published this week by the University of Oklahoma Press. This is Record's first book, but he has published numerous articles in various journals and periodicals.

The book articulates the cultural legacy of Arivaipa Canyon as seen through the eyes of some of its descendants, through Apache voices, knowledge and perspectives. The principal focus of the book is the infamous 1871 Camp Grant Massacre, a raid led by a group of Tucsonans that killed 118 Apaches.

Record, a senior lecturer in the American Indian studies department, employs a unique approach that reflects how the Apaches conceptualize their history and identity.

He weaves together four distinct narrative threads: contemporary oral histories from the San Carlos Apache reservation, historic documents of Apache relationships to Aravaipa following the establishment of the San Carlos Reservation, descriptions of pre-reservation subsistence practices and a history of early Apache struggles to maintain their connection with Aravaipa Canyon in the face of hostility from outsiders.

Record also mined the research notes of Grenville Goodwin, the pioneering ethnographer of the Apaches, to document important elements of Apache economic, political and social organization in pre-reservation times.

The University of Oklahoma Press describes "Big Sycamore Stands Alone" as a landmark enthohistory which documents a story that goes far beyond Cochise, Geronimo and the Chiricahuas. Record's book is a "trailblazing synthesis of historical and anthropological materials that lends new insight into the relationship between people and place."

Currently, he is directing the development of "Rebuilding Native Nations: Strategies for Governance and Development," a distance-learning curriculum designed for tribal leaders and tribal college students.

This year, NNI and the Harvard Project on American Indian Economic Development published Record's study "We Are the Stewards: Indigenous-Led Fisheries Innovation in North America" as part of their Joint Occasional Papers on Native Affairs series. His articles and other writings have appeared in several Native American periodicals, including Native Americas, Native Peoples, and Red Ink, The University of Arizona's Native American magazine.

Record also developed and teaches a new undergraduate course, "Native Nation Building: Governance and Economic Development." He has taught the introductory American Indian studies course, "Traditions 101: Many Nations of Native America," and has been a guest lecturer for several other courses, including "Native American Warfare" and "Native Americans in Film."

Record graduated from James Madison University with bachelor's degrees in history and mass communication. He has a master's and a doctoral degree in American Indian studies from the UA.