In honor of the late Stewart Lee Udall, among the most notable Arizona politicians, UA's Special Collections is hosting an exhibition and lecture series.
La Monica Everett-Haynes
,
University Communications
Jan. 27, 2011
Resources for the Media
Extra Info:

The scope and diversity of Special Collections each make it an important resource for the international academic community.

Established in 1958 to house materials on Arizona, the Southwest and the U.S./Mexico borderlands, Special Collections now includes rare books, manuscript collections, photographs and other materials in a wide variety of subject areas. 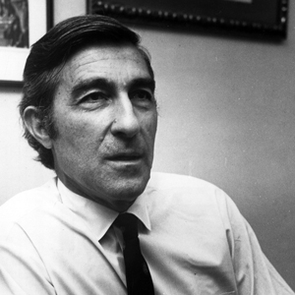 The late Stewart Lee Udall, a UA alumnus, was a champion of civil rights, an avid conservationist and a lawyer who served as a B24 gunner during World War II. The UA's Special Collections is hosting an exhibition and lecture series in honor of his legacy. (Photo courtesy of the UA Special Collections)

To honor his memory, Special Collections at the University Libraries has organized a new exhibition and lecture series.

“I’m for Stew: The Life and Times of Stewart Lee Udall” will be on display through June 15 in the gallery at Special Collections, located at 1510 E. University Blvd.

Titled after Udall’s congressional campaign slogan, “I’m for Stew,” the exhibition offers a glimpse into the many causes Udall championed. The lecture series will be held throughout the spring in conjunction with the exhibit.

Curated by congressional archivist Chrystal Carpenter, “I’m for Stew: The Life and Times of Stewart Lee Udall” celebrates that life and legacy of this influential Arizona native whose contributions to American society continue to resonate today.

A congressional representative of Arizona, Udall also served as the U.S. Secretary of the Interior from 1961-69 under presidents John F. Kennedy and Lyndon B. Johnson.

Born in St. Johns, Ariz. in 1920, Udall is often referred to as Arizona’s native son.

Following the Udall family tradition of public service, Udall was elected to the U.S. House of Representatives in 1954 from Arizona’s second congressional district.

Shortly after being re-elected to a fourth term in 1960, President-elect Kennedy appointed Udall as Secretary of the Interior – the first Arizonan to hold a cabinet level position.

A strong advocate for conservation, Udall would go on to oversee numerous environmental initiatives, including the founding of four national parks, 56 wildlife refuges and eight national sea and lake shores.

He also would see the enactment of environmental legislation, including the 1964 Wilderness Act, the Endangered Species Preservation Act of 1966 and the National Trail System Act of 1968.

Udall continued to fight for conservation following his retirement from politics in 1969, and he is considered a leading voice in American environmentalism.

“I’m for Stew” features a wide variety of materials ranging from the 1920s-2010, all selected from the Stewart L. Udall, Morris K. Udall and Levi Udall collections held in Special Collections at the University Libraries.

Among the items on display are World War II memorabilia and correspondence, campaign scrapbooks, letters, legislation and reflections from Udall’s political career.

Other items include correspondence with Rachel Carson, Ansel Adams and Jacqueline Kennedy Onassis, among others; materials relating to the integration of the Washington Redskins NFL team; two of Udall’s books; and Udall’s UA diploma.

The exhibit and corresponding lecture series are sponsored by the Friends of the University Libraries and the Morris K. Udall and Stewart L. Udall Foundation.