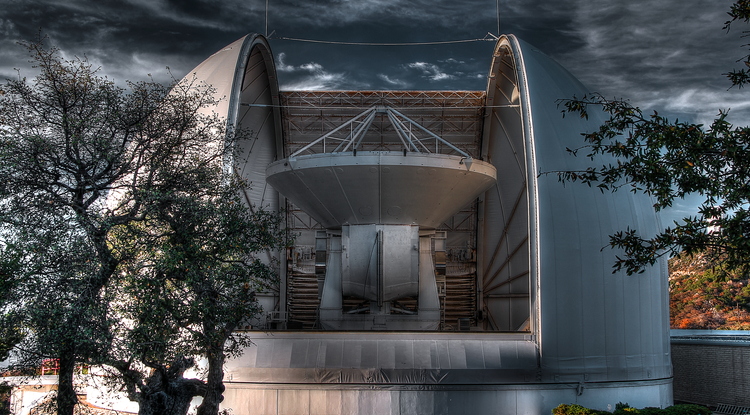 The new 12-meter telescope of the Arizona Radio Observatory in its dome at Kitt Peak. (Photo: Thomas Folkers)

Whirring back and forth on a turning turret, the white, 40-foot dish evokes the aura of movies such as "Golden Eye" or "Contact," but the University of Arizona team of scientists and engineers that commissioned it earlier this month isn't planning to listen for signals from extraterrestrials or hijack satellites.

Instead, the team detected the faint radio signals emanating from giant clouds of gas wafting through the Milky Way. The observations mark the first "light" received by the new, state-of-the-art, 12-meter radio telescope of the Arizona Radio Observatory on Kitt Peak near Tucson. This makes the UA the only university in the continental U.S. that has its own modern radio telescope.

"These first light measurements not only prove that the new 12-m is fully functional for scientific observations, but also represent a huge leap forward in astronomical capability for the ARO and the UA,” said Lucy Ziurys, director of the ARO, which is part of the UA’s Steward Observatory and Department of Astronomy and Department of Chemistry and Biochemistry.

The new 12-m telescope was installed in the existing ARO observatory dome on Kitt Peak, replacing a venerable but less capable antenna, which contained components more than 40 years old. The radio telescope is one of three prototype antennas built and tested for the Atacama Large Millimeter Array and became property of the UA on March 23, 2013. The antenna, obtained through an agreement with the European Southern Observatory, uses the most advanced technology for radio telescopes.

Performance-enhancing features include the reflector surface made from panels with a rhodium skin, and an instrumentation cabin and reflector structure constructed from lightweight carbon fiber. The new antenna can point at new targets 10 times faster and 20 times more accurately than the previous telescope.

"The antenna moves as fast as six degrees per second, with less than a second settling time," Ziurys said. "Speed is important in doing large surveys of numerous radio sources in the universe, because we gather our data by switching between source and reference position, and subtracting out the reference."

In addition, the telescope is less susceptible to wind than its predecessor and can be pointed directly at the sun without damage.

"We can see deeper into our universe in a shorter period of time, allowing for new discoveries previously not attainable and increasing the science output," Ziurys said.

Radio and in particular millimeter-wave astronomy can detect the cold, dark matter of the Milky Way and other galaxies that is not visible for telescopes detecting light, because it is simply too cold, Ziurys explained.

Making up at least half of the matter in our galaxy, giant gas clouds are the unique sites of present-day star and solar system formation. Understanding how stars and planets are created is a major theme of astronomy. In addition, these clouds foster the seeds for the origin of life, containing a wide number of prebiotic molecules, some which are carried by comets and meteorites to planet surfaces.

Recommissioning of the antenna took place over the past eight months. Several miles of wiring had to be reconnected without any errors. More than 20 large magnets were remounted on the telescope for the direct drive motors, along with a special cooling system for the instrument cabin. In early September, the first detector system was mounted on the telescope.

During first "light," the new telescope detected carbon monoxide, one of the 160 or so chemical compounds found to date in interstellar gas. Such interstellar molecules are the unique probes of cold, dense galactic material and are widely used to study the life cycle of stars and planets, from stellar birth to stellar death, as well as the chemical evolution of the galaxy and the extent of the so-called Galactic Habitable Zone.

"The results are truly outstanding given that these were the first observations ever made with a completely new and quite complex system," Ziurys said. "The entire team can be very proud of their achievement."

The telescope will be used for a variety of scientific projects, aimed at understanding the myriad of molecules now known to exist in outer space and thought to play a major role in the formation of stars and planetary systems, including our own. It also will be a key element in the Event Horizon Telescope array that will create images of supermassive black holes in the centers of galaxies, including the Milky Way.

"I congratulate the entire ARO staff and Professor Lucy Ziurys for successfully bringing the instrument to this point in so short a time," said Buell T. Jannuzi, director of Steward Observatory. "We are all excited by the imminent start of science observations with this new modern facility."