Construction of UA new residence halls also will generate more than $13 million in tax revenues, according to an analysis by the UA Economic and Business Research Center.
Johnny Cruz
,
University Communications
May 20, 2009
Resources for the Media 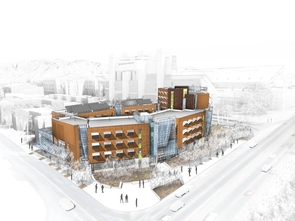 The construction of new residence halls at The University of Arizona will result in more than 1,500 jobs and will generate more than $13 million in tax revenues, according to an analysis by the UA Economic and Business Research Center.

The $116 million project will provide on-campus housing for more than 1,000 students when the halls open at the beginning of the fall 2011 semester.

Two new residence halls will be built along Sixth Street – one at Euclid Avenue, south of Coronado Hall, and the other at Highland Avenue, north of Apache-Santa Cruz Hall.

The project is expected to have a direct employment impact of 1097 jobs, which are expected to last one year. Direct jobs are positions that are primarily spent working on the design, engineering and construction. An additional 294 indirect jobs – in areas such as warehousing, transportation and other areas – will be created.

"When these workers spend their incomes in the state, they generate another 430 (construction) jobs," said Alberta H. Charney, UA senior research economist and author of the report.

The construction project will generate more than $93 million in labor income and more than $214 million in sales revenue – once indirect and induced impacts are considered.

A summary of total impacts for jobs, labor income and sales revenue is below:

According to the report, construction and design spending and salaries will generate additional tax revenue that will benefit city, county and state government, and communities outside of Tucson.

Nearly $2.7 million in direct tax revenues are expected to flow to the state of Arizona and more than $1.1 million will go to the city of Tucson. Pima County, the Pima Regional Transportation Authority and other cities and counties will receive additional tax revenues through construction of the residence halls.

A summary of direct, indirect and induced tax revenues is below:

"Our efforts to stimulate the local economy are evidenced by the economic impact this project will have on the local community,' said Joel Valdez, UA senior vice president for business affairs.

Students, especially those who are new to the UA, will benefit from the significant expansion of the availability of on-campus housing.

Topics:
Business and Law
Teaching and Students
Share This
Related