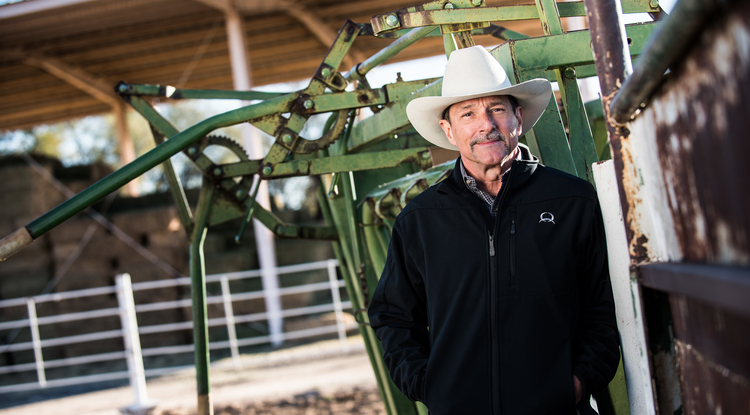 Out Here, Stewardship of Public Lands Is Cultural and Critical

George Ruyle has been interested in farming and ranching since he was a boy in Illinois. At the UA, he helps Arizona's ranching community work with the state and federal government to act as stewards of the land.
Emily Litvack
,
UA Research, Discovery and Innovation
April 10, 2017
Resources for the Media

If you were flying over the state of Arizona, you would see cities, bodies of water, thick forests. Mostly, though, you would see rangeland — vast expanses used largely for grazing livestock and recreation. According to George Ruyle, rangeland makes up about 70 percent of the state's landscape, and the people who keep it that way are ranchers.

Ruyle — who sports a Cinch zip-up jacket, blue jeans, a cream-colored cowboy hat and a graying horseshoe mustache — is a professor of range management for the University of Arizona's College of Agriculture and Life Sciences.

Ruyle was raised in a farming community in south-central Illinois. Throughout high school, he worked on a local farm, where he developed a love of agriculture and ecology and an appreciation for wide-open spaces. He moved to Arizona after graduation to work on his uncle's ranch and earned his bachelor's degree in Environmental Resources and Agriculture from Arizona State University. After earning his doctorate in rangeland science from Utah State University, Ruyle returned to Arizona and has now been at the UA since 1983.

In that time, Ruyle has become an institution unto himself. He has co-authored more than 30 journal articles, including four in 2015 alone, one of which is titled "Informal Rangeland Monitoring and Its Importance to Conservation in a U.S. Ranching Community." In 2001, he co-authored the Arizona Ranchers' Management Guide, a seven-section resource for ranchers, addressing topics from range cattle nutrition, to genetics and reproduction, to policy issues. He teaches undergraduates; he advises graduate students.

He regularly helps put on community workshops on ranching, including a recent workshop held at the Sonoita rodeo grounds, on the ecological implications of the Mexican gray wolf in the Southwest. He has been awarded the Arizona Agriculture "100" Council's Faculty Member of the Year. In February 2012, Ruyle became the first recipient of the Marley Endowed Chair for Sustainable Rangeland Stewardship, managing a $4.5 million endowed gift.

Of all the rangeland in Arizona, Ruyle says only about 12 percent of it is privately held. The rest is state or public land, held by agencies such as the U.S. Forest Service and the Bureau of Land Management. Because private rangeland is such a rarity in Arizona, most ranches lease at least some land from various government agencies. That's where Ruyle comes in.

Ruyle knows the ins and the outs of ranching on public lands, and he's especially familiar with the process in Arizona.

"It's a fairly complex regulation system that ranchers deal with, and there's a lot of ecological and environmental requirements that they have to uphold," Ruyle says. "I help them with that."

Arizona doesn't seem like a great place to have a ranch. It's hot, dry and barren. On a 640-acre plot of land — a "section," in the lingo of United States land surveying — a rancher usually can graze between 10 and 30 cattle. In the Midwest, the same rancher could graze in excess of 100 cattle on a section.

Nevertheless, there are more than 2,500 ranching families who are here, have been here and will stay here, working the public lands for centuries at a time.

Connection to the Earth

Wink Crigler is in one of those ranching families. Her family has owned the X Diamond Ranch in Springerville, Arizona, for five generations, starting in 1893. Today, Crigler runs the X Diamond, which is tucked away on a mix of private, U.S. Forest Service, Arizona Game & Fish, and Bureau of Land Management rangeland in the foothills of Arizona's White Mountains.

Crigler is wearing blue jeans, a brown leather belt with a big, no-frills silver buckle, and a plaid button-up shirt in shades of orange and cream. Her hair is cut short. Her voice — at once hoarse and piercing — is assured and unwavering as she says, "There's a line from a book called 'Days That Are Done.'" Crigler reads a lot and habitually speaks in quotations, prefacing each with when and where she read it. The book she's referring to this time was written by William Perry Sanders in 1918, and it offers ruminations on frontier and pioneer life in the Southwest.

She quotes the line verbatim: "Some of the Creator's greatest sermons are open to mankind, right out under the stars and the canopy of Heaven." She pauses briefly. "And that kind of says it all, doesn’t it?" Her question is rhetorical. "Open spaces give you a connected feeling. A ranch landscape connects you to the earth, and it gives you some degree of peace."

"That’s very well put, Wink," says Richard Collins, a retired rancher in Sonoita. He is wearing blue jeans, a plain white button-up with oversize pockets and brass buttons, glasses and a gray Wrangler ball cap. His voice is low and gravelly. Today, Collins, Crigler and Ruyle are together to attend a meeting on Mexican gray wolves at the local rodeo grounds.

"It's a very good book," she responds. To Crigler, things are often very good or very bad.

Keeping the Bad at Bay

Before she met Ruyle about 16 years ago, she read a quote from him that stuck with her. She paraphrases: "If you own a ranch, you have to know more about that landscape than anybody else, because if you don't, you're not in a position to defend and promote its sustainability."

"That became a real motivation to me," Crigler says. "That's the motivation behind everything I do."

Ruyle and the ranchers he works with, including Crigler and Collins, view themselves as stewards of the land, a job that they take very seriously.

"People do bad things out there where nobody's paying attention," Ruyle says. "It would just boggle your mind. So there are huge benefits for these federal agencies to have people with a vested interest helping them manage the land."

"The ecological sciences inform ranching," Ruyle says. "Cows eat plants, and if you leave them on pastures for long periods of time, in numbers that exceed the production of the land, you're going to kill the plants."

All year, every year, Crigler and Ruyle collect and analyze data from Crigler's ranch, about everything from the cattle, to Mexican gray wolves, to the vegetation. Together, they ensure that the ranch is healthy, and that it complies with regulations of each of the state and federal agencies from which the X Diamond Ranch leases land.

Stewards of the Land

In ecology, the interaction between these ranchers and federal agencies would be called mutualism. The ranchers have land, and the agencies, which do not have enough staff to regularly manage ranges themselves, have responsible tenants. Oftentimes, the only thing that keeps public land safe from illegal wood-cutters, animal poachers, litterers, unlawful shooters and off-roaders are ranchers such as Crigler who have permits to graze it with their cattle.

But it isn't always easy to care for so much land, while also answering to four or five government agencies at a time. In fact, it rarely is, Crigler says. In their line of work, it is a well-known fact that ranchers and the government agencies who own the land don't always see eye-to-eye. Despite sharing a common and noble goal — conserving the land — ranchers don't always agree with the mandates they are given, and Crigler finds those mandates virtually impossible to keep up with at times.

Ruyle acknowledges the challenges of maintaining such vast landscapes: "Every time I go up to (Crigler's ranch), I ask, 'Where is everything? What do we need to do today?'"

"That’s kind of why George is there," says Crigler, laughing. "He goes, 'What's broken today? What do we need to fix?' It's a constant process between George and myself, looking every day at what went well, what failed, what needs tweaking and so on." She sighs in exhaustion.

"George is a bright spot in all of the struggles that we have," Collins says.

It isn't surprising that Ruyle is a bright spot for Arizona ranchers. He has an unusually calming presence, equal parts stoic and good-humored. He calls himself a facilitator, but in many ways he also is a mediator between ranchers and the government. He collects and presents the ecological science that informs policy on the rangeland, garnering the trust and respect of both parties.

"I can't overemphasize this point. In our community, George's presence has been incredible. George gets people to sit around a table and talk about these issues, and it's really pretty phenomenal," Crigler says. "People need to know that (discussion) can happen if we all put forth the effort, and George has gone way more than that extra mile to make it happen."

For Crigler, Collins and Ruyle, ranching starts and ends with a love of the land.

"It's just a very personal relationship that ranchers have with the land," Ruyle says. "Out here, it's cultural."

Collins points to a poster in his office. "You see that?" It features a photo of man on horseback looking out at a vast expanse of grasslands under a big blue sky.