Out of the Woods for 'Ardi'

UA geoscientist Jay Quade is one of eight researchers who say evidence suggests that Ardi, the purported human ancestor, lived in a savanna rather than a dense woodland. The critique is published May 28 in Science.
College of Science
May 27, 2010
Resources for the Media 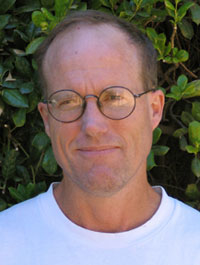 Jay Quade, professor of soil geochemistry in the UA department of geosciences

Ardipithecus ramidus – a purported human ancestor that was dubbed Science magazine's 2009 "Breakthrough of the Year" – is coming under fire from scientists who say there is scant evidence for her discoverers' claims that there were dense woodlands at the African site where the creature lived 4.4 million years ago.

Instead, "there is abundant evidence for open savanna habitats," says University of Utah geochemist Thure Cerling, lead author of a critique published as a "technical comment" in the May 28 issue of Science.

The criticism – by eight geologists and anthropologists from seven universities – is important because the claim that the 4.4-million-year-old fossil nicknamed Ardi lived in woodlands and forest patches was used as an argument against a longstanding theory of human evolution known as the savanna hypothesis.

That hypothesis holds that an expansion of savannas – grassy plains dotted with trees and shrubs – prompted ape-like ancestors of humans to descend from the trees and start walking upright to find food more efficiently or to reach other trees for shelter or resources.

Co-author Jay Quade, a geoscientist at the University of Arizona, said, "The savannah hypothesis of human evolution, one of the oldest, is iconic. It started with Darwin."

A breakthrough under fire

Last October, a team of four dozen scientists led by Tim White of the University of California, Berkeley, published 11 studies in Science outlining 17 years of work in which they excavated Ardipithecus fossils – including a partial skeleton of a female nicknamed Ardi – as well as 150,000 animal and plant fossils. They characterized the environment at what is now Aramis, Ethiopia, as woodland to forest patches with a climate cooler and more humid than today.

In December, Science named the research that uncovered Ardipithecus and her environment as the 2009 "Breakthrough of the Year," citing how the fossils were more than 1 million years older than those of the previously oldest known hominid partial skeleton – that of Lucy, or Australopithecus afarensis.

Most of the authors have studied ancient soils and other geological indicators of environment at African hominid sites. Levin, Quade and Wynn are former Utah students. Levin earned her master's degree at UA with Quade.

The critique concludes that Ardi most likely lived in tree or bush savanna with 5 percent to 25 percent of the area covered by trees or shrubs, not the minimum 60 percent to meet the definition of a closed-canopy woodland. Cerling acknowledges Ardi could have lived in a wooded river corridor, but it was a river that flowed through savanna.

"It wasn't a pure grassland, and it wasn't forest either," says Brown, dean of the University of Utah College of Mines and Earth Sciences and distinguished professor of geology and geophysics.

"It was what people call savanna," says Cerling, a distinguished professor of geology and geophysics, and of biology. That contradicts White and co-workers, who "propose an environment that is mostly forested with connected canopy."

Cerling and Brown say they aren't advocating the savanna hypothesis, just noting that White's own data support it rather than contradict it.

"The idea that savannas were important in human ancestors starting to walk on two legs means they spent less energy getting from one food source to another than they would have if they were still moving around on all fours," says Brown.

"One of the big, newsworthy items that White and co-workers put forward is that Ardipithecus walked upright on two legs, yet lived in a forested environment," he adds. "They then say the savanna hypothesis – which holds that the reduction in forest cover in Africa is one of the reasons for early man becoming bipedal – must be incorrect."

Cerling says: "Our conclusion is that much of the evidence that they present should be interpreted as a savanna environment, therefore their rejection of the savanna hypothesis is incorrect."

The case for Ardi's home on the savanna

Three of the 2009 Science papers by White and colleagues cited various data they collected from ancient soils, plant fossils and so on to support the notion that Ardipithecus lived in woodlands.

Cerling and colleagues based their conclusions on the White team's own data, including data for ancient soils that are buried and compacted, and phytoliths, which are tiny grains of silica that form within living plants and later become fossilized in rock.

The relative abundances of phytoliths from various plants, and stable or non-decaying carbon isotopes in fossil soils both provide evidence of ancient vegetation, letting researchers distinguish whether an area was covered by grasses or woody plants. Cerling says phytoliths from Aramis are inconsistent with a dense woodland environment and instead indicate tropical grasses made up 43 percent to 77 percent of the ecosystem.

Cerling says White contends seven of the nine Aramis sites were forested. Yet the carbon isotopes indicate "the Aramis site has more grasses than other sites of the same age that other people have studied in East Africa," he adds. "It means Aramis was more open than even the most open of the sites people have looked at."

Carbon-13 levels in tooth enamel from animals such as giraffes and antelopes were interpreted by White and colleagues to indicate closed-canopy forest patches. Cerling says the values are not consistent with modern animals that live in dense forests, but are consistent with browsing animals that range from river-edge woodlands to savanna.

The team that discovered Ardipithecus also used an index of aridity, "and the values they calculate for Aramis are comparable to the driest modern sites that have been examined," says Cerling. Yet they claim "out of the blue" that the area was forested rather than being a savanna with wooded areas along a river.

Cerling sharply criticizes White's team for claiming a forest environment when there are fossils of two species of small grassland rodents.

"What they are saying is all the grassland mice were brought in from somewhere else after they were eaten by owls," he says. "That presupposes it was a forest."

The critique concludes that although its authors do not judge the validity of the savanna hypothesis, the connection between human ancestors walking upright and the expansion of grasslands "remains a viable idea."

This story is modified from one written by Lee Siegel of the University of Utah in Salt Lake City.