Panacea in the Spice Rack

UA researchers plan to study whether turmeric, a relative of the ginger plant that has been grown and processed for centuries as a dye and a flavoring for foods such as curry, may aid stroke recovery in adults with diabetes.
Janet Stark
,
Arizona Health Sciences Center
Aug. 11, 2010
Resources for the Media 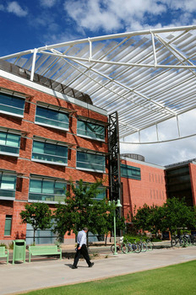 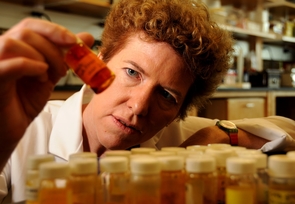 Turmeric, a relative of the ginger plant, has been grown and processed for centuries as a dye and as a flavoring for foods such as curries. The underground stem, or rhizome, of the turmeric plant also has been used to treat a wide range of medical conditions, ranging from indigestion to arthritis to gallstones and even some forms of cancer.

While anecdotal evidence suggests that some people feel better when they use a turmeric supplement for a given disorder, well-designed clinical trials to support the efficacy of turmeric are lacking. But a growing body of research at the Arizona Health Sciences Center at the University of Arizona is shedding light on how turmeric works in animal models, and how it might be effective in people as well.

Among the leading contributors to this research are two women whose prior work in clinical settings helped motivate their re-channeling of energies into research.

Dr. Janet Funk is an associate professor of medicine at the UA College of Medicine and a member of the UA's BIO5 Institute. As a practicing endocrinologist, she specialized in treating patients with diabetes.

Both researchers have returned from the bedside to the bench, looking for ways that clinical outcomes might be improved. Together, they are leading a research team that is investigating the effect of turmeric on vascular inflammation and stroke. Their discoveries eventually may give turmeric an honored place in the medicine cabinet.

Funk had been studying inflammation, which is thought to underlie a number of medical conditions. In 2006, with support from the National Institutes of Health, she demonstrated preventive effects of turmeric in rheumatoid arthritis (Efficacy and Mechanism of Action of Turmeric Supplements in the treatment of Experimental Arthritis).

Her team found that the turmeric extract inhibits activation of a transcription factor, NF-kB, that, when turned on, enhances production of inflammatory proteins. This finding suggested that turmeric shares the same mechanism of action as anti-arthritic pharmaceuticals then under development that target NF-kB – and that turmeric may have a use in treating other inflammatory disorders.

Since then, Funk determined that turmeric has the ability to quell inflammation in blood vessels, and she and Ritter have proceeded on a collaboration to look at turmeric extract and stroke.

Having a stroke, the third-leading cause of death in the U.S., is a leading cause of adult disability. Ritter had been conducting basic science research, looking specifically at how white blood cells cause unwanted inflammation in the brain after stroke.

She noted that the only therapy currently in use – clot-busting drugs – had the unfortunate effect of allowing inflammatory white blood cells that had been primed for activity by the stroke to sweep back into the injured brain once the clot broke free and adhere to the vascular walls, further impeding blood flow and adding to brain injury.

With research funds from the state of Arizona, Funk and Ritter found that turmeric interrupts that process, protecting the vasculature and reducing inflammation in the vessels.

Armed with this new information, they are now honing their research focus to determine whether turmeric may aid stroke recovery in one group of people who suffer particularly catastrophic outcomes after stroke – adults with diabetes.

The Funk-Ritter research team, which is composed of researchers and graduate students in physiology and nursing, is requesting funds from the National Institutes of Health to answer this question. If their theory proves correct, the next step will be to initiate clinical trials in Tucson.

"We hope to come full circle and return to where we started, with the patient," said Funk, "offering a new way to treat stroke for people suffering from diabetes who currently do not have very effective options."

Ritter could not agree more.

Coordinator of the clinical primary stroke center at University Medical Center and a principal instigator behind the development and certification of the stroke center, she added, "We need to explore every option in improving stroke treatment and care."