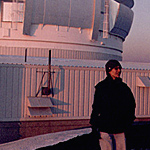 The first eyewitness to the birth of a new species may be a University of Arizona graduate student. Her new findings could help biologists identify and understand the precise genetic changes that lead one species to evolve into two separate species.

Laura K. Reed and her advisor Therese Markow, a UA Regents' Professor, made the discovery by observing breeding patterns of fruit flies that live on rotting cacti in western deserts. Whether the closely related fruit fly populations, designated Drosophila mojavensis and Drosophila arizonae, represent one species or two is still debated by biologists, testament to the UA researchers' assertion that the insects are in the early stages of diverging into separate species.

The team's findings will be published the week of June 7 in the online early edition of the Proceedings of the National Academy of Sciences.

The seeds of speciation are sown when distinct factions of a species stop reproducing with one another. When the two groups can no longer interbreed, or just prefer not to, they stop exchanging genes and eventually go their own evolutionary ways, thus forming separate species.

While the evolutionary record is brimming with examples of speciation events, biologists haven't been able to put their fingers on just what initiates the reproductive isolation, Reed said. Several researchers have identified mutant forms of certain genes associated with the inability of fruit flies to hybridize with closely related species. However, in all cases those genes were discovered long after the two species diverged. Therefore, those genetic changes could either have caused the speciation, resulted from it or even be incidental changes that happened long after the two species diverged.

Reed said the difficulty is researchers need to catch the genetic schism while it's still brewing. Now she and her advisor have managed to do just that.

Another finding adds support to that notion. Previous research had shown that for a strain of Drosophila mojavensis from southern California's Catalina Island, mothers always produce sterile sons when mated with Drosophila arizonae males.

Because the hybrid male's sterility depends on the mother's genetic heritage, Reed and Markow conclude the genetic change, or polymorphism, responsible for creating sterile sons must not be firmly established in Drosophila mojavensis populations -- a telltale sign that the change is recent.

Surprisingly, when she tested Drosophila mojavensis females from other geographic regions, Reed found that a small fraction of those populations also exhibited the hybrid male sterility polymorphism. "That polymorphism exists in every population I looked at," Reed said. "It just happens to be that whatever factors are causing sterility are at higher frequencies in the Catalina Island population."

Further experiments demonstrated that the sterility trait is caused by more than one genetic change. "I think there are many genes -- 4 or 5 probably, maybe many more," Reed said.

Now that the researchers are hot on the trail of a set of "speciation genes," the next task will be to identify them. For help in the hunt, the team will take advantage of the newly begun Drosophila mojavensis genome sequencing project, which will provide a complete roadmap of every gene in the species.

"Evolutionary biologists are excited to figure out what causes what we see out therethe relative forces of selection and drift -- whether things are adapting to their environment or variation is random," Reed said.

"Another important component to that is how that variation is partitioned into separate species. Once you're a separate species, you have an independent evolutionary trajectory to some other species -- an independent set of tools, or genetic potential, relative to other species. So this partitioning of genomes is an important cause of the variation we see in nature."