Lori Stiles
May 27, 2008
Resources for the Media
Extra Info: 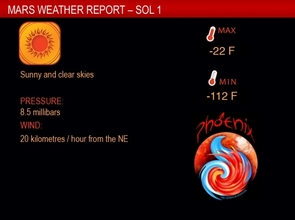 (Click to enlarge) Skies were clear and sunny on Sol 1 on Mars. The temperature varied between minus 112 degrees Fahrenheit in the early morning and minus 22 degrees Fahrenheit in the afternoon. The average pressure was 8.55 millibars, which is less than a 1/100th of the sea level pressure on Earth. The weather station was activated in the first hour after landing on Mars. Measurements are being recorded continuously. The Phoenix Mission is led by the University of Arizona, Tucson, on behalf of NASA. Project management of the mission is by NASA's Jet Propulsion Laboratory, Pasadena, Calif. Spacecraft development is by Lockheed Martin Space Systems, Denver. The Canadian Space Agency contributed Phoenix's meteorological station. The University of Aarhus in Denmark contributed the telltale on the meteorology mast. (Image by: Canadian Space Agency/University of Aarhus) 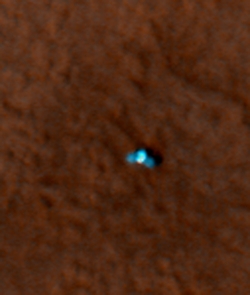 This shows a color image from Mars Reconnaissance Orbiter's High Resolution Imaging Science Experiment (HiRISE) camera. It shows the Phoenix lander with its solar panels deployed on the Mars surface. The Phoenix Mission is led by the University of Arizona, Tucson, on behalf of NASA. Project management of the mission is by NASA's Jet Propulsion Laboratory, Pasadena, Calif. Spacecraft development is by Lockheed Martin Space Systems, Denver. (Image by: NASA/JPL-Caltech/University of Arizona) 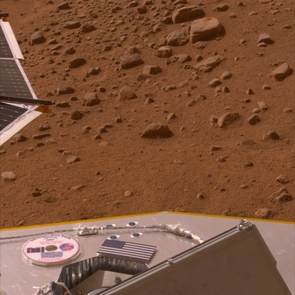 (Click to enlarge) This image, released on Memorial Day, May 26, 2008, shows the American flag and a mini-DVD on the Phoenix's deck, which is about 3 ft. above the Martian surface. The mini-DVD from the Planetary Society contains a message to future Martian explorers, science fiction stories and art inspired by the Red Planet, and the names of more than a quarter million earthlings. (Image by: NASA/JPL-Caltech/University of Arizona)

Mars Reconnaissance Orbiter's High Resolution Imaging Science Experiment (HiRISE) camera acquired this image of Phoenix hanging from its parachute as it descended to the Martian surface. Shown here is a 10 kilometer (6 mile) diameter crater informally called "Heimdall," and an improved full-resolution image of the parachute and lander. Although it appears that Phoenix is descending into the crater, it is actually about 20 kilometers (about 12 miles) in front of the crater. (Image by: NASA/JPL-Caltech/University of Arizona)

NASA's Phoenix Lander is ready to begin moving its robotic arm, first unlatching its wrist and then flexing its elbow.

Mission scientists are eager to move the arm, for that arm will deliver samples of icy terrain to instruments made to study this unexplored Martian environment.

The team sent commands for moving the arm on Tuesday morning to NASA's Mars Reconnaissance Orbiter for relay to Phoenix. However, the orbiter did not relay those commands to the lander, so arm movement and other activities are now planned for Wednesday. The orbiter's communication-relay system is in a standby mode. Another orbiter, NASA's Mars Odyssey, is available for relaying communications between Earth and Phoenix.

The Mars Reconnaissance Orbiter did send back spectacular first images of the landed Phoenix from orbit. The Phoenix Lander returned views of where it will work for the next three months and a preliminary weather report.

A newly processed image from the high-resolution camera known as HiRISE on the Mars Reconnaissance Orbiter shows a full-resolution view of Phoenix's parachute and lander during its descent on Sunday, with Heimdall crater in the background.

"Phoenix appears to be descending into the 10-kilometer, or 6-mile, crater, but is actually 20 kilometers, or about 12 miles, in front of the crater," said HiRISE principal investigator Alfred S. McEwen of The University of Arizona.

HiRISE took a new color image of Phoenix on the ground about 22 hours after it landed. It shows the parachute attached to the back shell, the heat shield and the lander itself against red Mars. The parachute and lander are about 300 meters, or roughly 1,000 feet, apart.

Information for where to point HiRISE for seeing Phoenix on the ground came from the Phoenix navigation team. The team used communications between Mars orbiters and Phoenix to refine its calculation of where Phoenix had landed. "It's a bit like the global
positioning system that a lot of people have in their cars now," said JPL's Brian Portock, Phoenix navigation team chief.

Commands to be sent to the lander Wednesday morning include taking more pictures of the surroundings and making the first movements of the mission's crucial robotic arm.

A covering that had shielded the arm from microbes during its last few months before launch had not fully retracted on landing day, but it moved farther from the arm during the following day.

"The biobarrier has relaxed more and allows more clearance, but it was not a major concern either way," said Fuk Li, manager of the Mars Exploration Program at NASA's Jet Propulsion Laboratory, located in Pasadena, Calif.

During the next three months, the arm will dig into soil near the lander and deliver samples of soil and ice to laboratory instruments on the lander deck. Following today's commands, its movements will begin with unlatching the wrist, then moving the arm upwards in a stairstep manner.

Phoenix principal investigator Peter Smith of the UA was delighted with new images of the work space. "The work space is ideal for us because it looks very diggable. We're very happy to see just a few rocks scattered in the digging area."

The Phoenix weather station, provided by the Canadian Space Agency, was activated within the first hour after landing on Mars and measurements are now being recorded continuously. The data from the first 18 hours after landing has been transmitted to the science team, and the team has provided a weather report. The temperature ranged between a minimum of minus 80 degrees Celsius (minus 112 degrees Fahrenheit) in the early morning and a maximum of minus 30 degrees Celsius (minus 22 degrees Fahrenheit) in the afternoon. The average pressure was 8.55 millibars, which is less than a hundredth of the sea level pressure on Earth. The wind speed was 20 kilometers per hour (13 miles per hour), out of the northeast. The skies were clear.

More instruments will be activated over the coming days, and the weather report will expand to include measurements of humidity and visibility.

Smith presented a new Surface Stereo Imager view of the American flag and a mini-DVD on the Phoenix's deck, which is about three feet above the Martian surface. The mini-DVD, from the Planetary Society, contains a message to future Martian explorers, science fiction stories and art inspired by the Red Planet, plus the names of more than a quarter million earthlings.