The Phoenix Misson Lander is set to land on Mars on Sunday. The spacecraft is on target and everything is looking good.
Lori Stiles
,
University Communications
May 22, 2008
Resources for the Media
Extra Info:

The Phoenix mission is led by Smith of UA's Lunar and Planetary Laboratory with project management at JPL and development partnership at Lockheed Martin. International contributions come from the Canadian Space Agency; the University of Neuchatel, Switzerland; the universities of Copenhagen and Aarhus, Denmark; Max Planck Institute, Germany; and the Finnish Meteorological Institute. For more about Phoenix, visit: http://www.nasa.gov/phoenix and http://phoenix.lpl.arizona.edu. 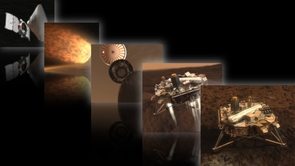 This artist's montage shows NASA's Phoenix spacecraft en route to and landing on Mars. (Photo courtesy of NASA/JPL-Calech/University of Arizona)

The Phoenix spacecraft is only three days and three million miles away from entry, descent and landing on Mars – the most difficult and scariest phase that any robotic lander must face.

But the spacecraft is healthy, right on target, and even predicted to have good landing weather, team leaders from The University of Arizona, the NASA Jet Propulsion Laboratory (JPL) and Lockheed Martin said at a JPL news briefing in Pasadena today.

"The latest calculation from our navigation team shows the center of the area where we're currently headed lies less than eight miles from the center of our target area," said Barry Goldstein, Phoenix project manager at NASA's Jet Propulsion Laboratory, lcoated in Pasadena, Calif.

"We may decide on Saturday that we don't need to use our final opportunity for fine-tuning the trajectory Phoenix is on," Goldstein said. "Either way, we will continue to monitor the trajectory throughout Saturday night, on the off chance we need to execute our contingency maneuver eight hours before entry."

The spacecraft is in fine health.

"All systems are nominal and stable," said Ed Sedivy, Phoenix spacecraft program manager for Lockheed Martin Space Systems, of Denver, which built the spacecraft. "We have plenty of propellant, the temperatures look good and the batteries are fully charged."

Phoenix principal investigator Peter Smith of the UA said, "We are ready to robotically operate our science lab in the Martian arctic and dig through the layers of history to the ice-rich soil below. The instruments are in top shape, the team is ready, and the Science Operations Center is ready to explore Mars."

Phoenix scientists from around the country, as well as from from Canada and Europe, held their final meeting at the Science Operations Center, or SOC, in Tucson, earlier this week. They'll run the mission from the center after the spacecraft lands.

Images from a Mars Reconnaissance Orbiter camera run by Phoenix co-investigator Michael Malin show the weather will be good on Sunday, with no significant dust storms around the landing site, Smith said.

On Sunday, shortly after the annual 500-mile race at the Indianapolis Motor Speedway, Phoenix will be approaching Mars at about 12,750 miles per hour, a speed that could cover 500 miles in two minutes and 22 seconds.

After it enters the top of the Martian atmosphere at that velocity, it must use superheated friction with the atmosphere, a strong parachute and a set of pulsing retrorockets to achieve a safe, three-legged standstill touchdown on the surface in just seven minutes.

The earliest possible time when mission controllers could get confirmation from Phoenix indicating it has survived landing will be at 4:53 p.m. Pacific Time on Sunday (7:53 p.m. Eastern Time). Of 11 previous attempts that various nations have made to land spacecraft on Mars, only five have succeeded.

Phoenix will land farther north on Mars than any previous mission, at a site expected to have ice-rich permafrost beneath the surface, but within reach of the lander's robotic arm. Phoenix is equipped to study the history of the water now frozen into the site's permafrost, to check for carbon-containing chemicals that are essential ingredients for life, and to monitor polar-region weather on Mars from a surface perspective for the first time.